By Michaela Paukner posted on March 31, 2022 | Posted in Soil Health

From the depths of a soil pit, it’s clear how cover crops and no-tillage benefit overall soil health.

At the healthy soils station, Michael Patin, a district conservationist with the Natural Resources Conservation Service, and Jamie Patton, senior outreach specialist of nutrient and pest management at the University of Wisconsin, shared these 3 ways cover crops can improve your soil health:

1. Cover crops and no-till keep soils in place during rainfall.

Patin says water runoff from a farm field isn’t a bad thing. The problem is the amount of soil it takes with it.

“If it’s coming off the field, it’s impacting your bottom line and the next generation’s bottom line,” Patin says.

Patin demonstrated how cover crops and no-till preserve soil and retain moisture with a rainfall simulator. The video below was filmed during the second of 3 times that Patin ran the simulator at the field day. The samples, from left to right, came from:

Water showered five soil samples for several minutes until the rain gauge reached 7/10 of an inch of water. As the rainfall simulator showed, samples 4 and 5 from the field with cover crops and the fence line prevented the most water and soil runoff. You can inventory the health of your own soil using 4 principles illustrated by the most successful samples in the simulator:

Patin recommends making small changes in one area of the field to improve soil health, and as you learn what works, implement those practices in other areas and fields. 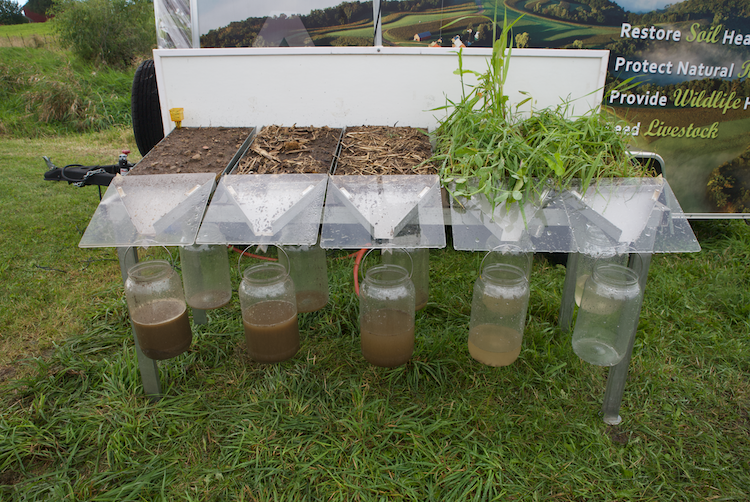 BUCKETS OF DIFFERENCE. After running the rainfall simulator for several minutes, buckets underneath the soil samples taken from several West Bend, Wis., area farm fields indicate how much water and soil ran off with 7/10 of an inch of water. (Left to right) Sample 1 is from a conventionally tilled corn and soybean field. Sample 2 is residue from 2 years of corn. Sample 3 came from a field across the road from Ramthun’s, which grew oats in the spring and had a crimson clover cover crop last year. Sample 4 is from one of Ramthun’s fields with cover crops. Sample 5 is from the fence line.

2. Whether you describe it as cookie crumbs, chocolate cake or cottage cheese, soil aggregation is a key indicator of soil health.

Soil aggregates are clumps of soil particles. In the world of soil health, clumps are good.

Less disturbance and more growing roots result in more aggregate formation. Patton says roots are lazy and follow old root channels, but they’ll also make some new ones in the process. This is why it’s important to follow cash crops with cover crops.

“We're continually making new channels, and we're continually keeping them open through filling in with roots,” Patton says. “Over time, this is how we create aggregation.”

Patton says surface soil should have a granular structure, meaning it crumbles in your hands. It should only take a little pressure to break apart the clumps of soil, a consistency that makes it easy for roots, earthworms, water and more to travel through the soil.

“If my plant is spending less energy to get deep down into that soil profile, that means it has more energy to make biomass, forage and grain,” Patten says. “It can use its energy elsewhere than to make roots.”

Stable soil aggregates can withstand wetting and drying cycles. If a raindrop hits a stable aggregate, it stays together and maintains space for water movement and roots, Patton says. When water can drain, soil can dry out.

In the soil pit, observers could see what areas of the soil were holding moisture based on its color. Patton says lowland soils tend to be dark, but areas of blue, gray and green indicate that the soil is holding water. Yellows, reds and oranges mean the soil has oxygen.

Dry soil warms up faster than wet soil, which eliminates the need to till the soil to warm it up. Patton says research has shown that soils with cover crops warm up faster or at least as fast as soils that have been tilled.

If your fields have compaction, your soil structure won’t be the healthy, crumbly consistency that’s easy for roots to penetrate. In most cases, stopping tillage and using cover crops will resolve compaction over the years.

Patin estimated this particular field hadn’t been conventionally tilled for 8-10 years, so the plow pan was thin but present. He used a penetrometer to feel for the plow layer, saying you’ll feel the difference in pressure of the soil. Within the soil pit, Patton pointed out where aggregates lined up horizontally, indicating evidence of plowing. 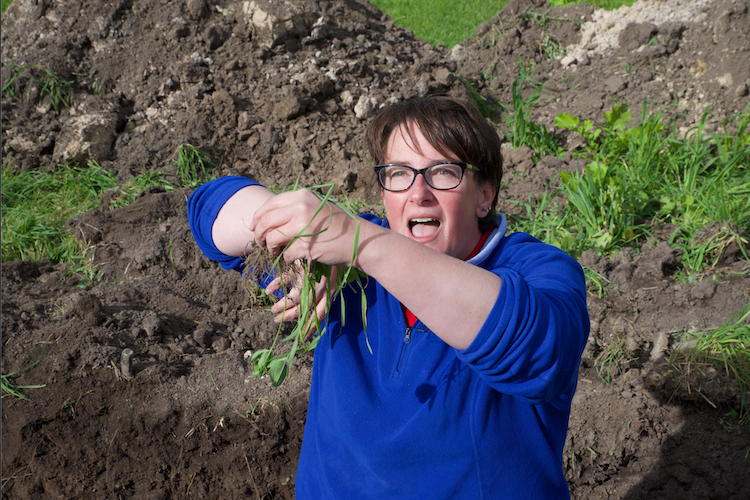 ROOT WORK. Jamie Patton, senior outreach specialist of nutrient and pest management at the University of Wisconsin, demonstrates how lateral roots break up compaction during the Healthy Soils Field Day in West Bend, Wis. To get rid of compaction, rely on biology. Lateral roots growing out horizontally break up compaction in those plow pans, transforming the soil over the years from plates to blocks to aggregates.

Severe compaction may require a subsoiler, but Patton says to only use one if you know where the compaction is within the soil profile and if the soil is dry when you’re using it. The purpose of the shank is to pick up the soil and drop it, causing it to shatter, but that will only occur if the ground is dry.

Here are Patton’s recommendations on how she’d use a subsoiler to address compaction:

“Be sure to have the proper spacing on the shanks. The soil should to be appropriately dry. Set the subsoiler at least 1-2 inches below the bottom of that plow pan to get below the structure of that plow pan, and only do it once.”

Hear more from Patton about soil health in this episode of the No-Till Farmer podcast.