By Clay Pope posted on October 25, 2022 | Posted in Water Management

Woke up yesterday to just some “great” news about the ongoing drought in the Oklahoma Farm Report and its impact on the regions winter wheat crop:

The pasture news isn’t much better:

One year ago, Oklahoma’s range and pasture conditions were rated 25 percent poor to very poor, so we have seen that condition decline rapidly over the past year. Going into the winter season, these low numbers are not a good sign for those wanting to get wheat pasture cattle out on the field.”

This weeks drought monitor isn’t helping either (remember the darker the picture, the worse the drought): 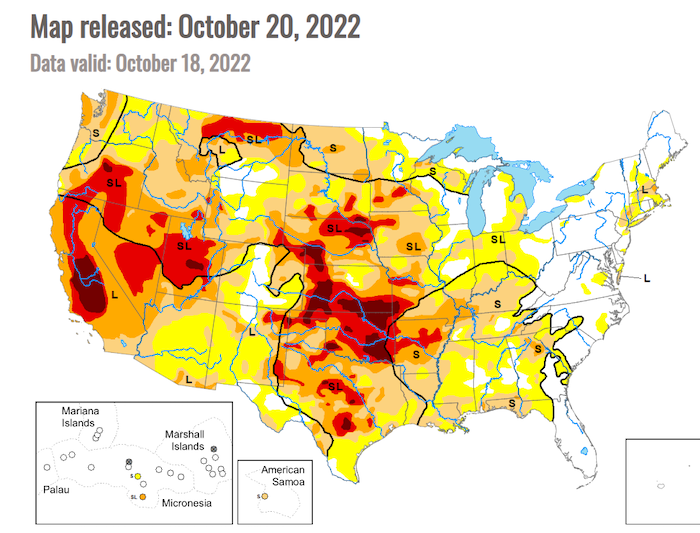 The conditions in Oklahoma and Kansas especially continue to deteriorate. Wish I could say something positive. I guess we don’t have to worry about flooding at the moment.

Anyway—as these conditions continue, we will keep trying to get information about the impact of the drought out there.   As part of this effort, we are continuing our “Voices from the Drought” video series.  This week we posted our second video.  This time we visit with Matt Muller, a crop producer from Southwest Oklahoma about the impact these dry conditions have had on his operation.


You also can check out our latest podcast interview with our partners at the National Weather Service. Spoiler alert….the outlook for a drought-breaking rain over the next few weeks and months isn’t promising.

As a reminder, if you have not checked in with your local USDA Service Center to see what kind of drought assistance is available, you need to do so! Not only is there help available from USDA (we wrote about some of this in an earlier blog ), but some states have taken action on drought assistance too (Oklahoma for example, has engaged its emergency drought fund).

Clay Pope is a farmer and rancher from Loyal, Okla., and is working as a consultant to the USDA Southern Plains Climate Hub. He also serves on as a board member of the Oklahoma Wheat Growers Assn. He is former executive director of the Oklahoma Assn. of Conservation Districts.

It's Never Too Late to Plan for Drought