Skip-row corn (above left) and solid corn (above right) in western Keith County in the extremely dry year of 2012. Both fields had suffered moderate hail damage.

The idea behind skip-row planting is to prevent corn plants from using all of the available soil water too early in the growing season. Because water in the soil between widely spaced rows cannot be reached by the crop until later in the season, water is available to plants in July and August. Corn is very sensitive to drought in the silking to blister stages of development, which occur in July and August.

Skip-row corn research began in Nebraska in 2003. In this first trial, all rows of corn were planted and then plants were removed to reduce population, or one or two rows were removed on July 2. The growing season precipitation, from Sept. 1, 2002 to Aug. 31, 2003, was 17.88 inches. The last 30 years average precipitation was 20.43 inches. A breakdown of yields from this trial, which included four replications, follows:

Normally, by July 2, corn will have used 6 inches of soil water. Yields may have been further increased if the skip treatments had been implemented earlier in the season. 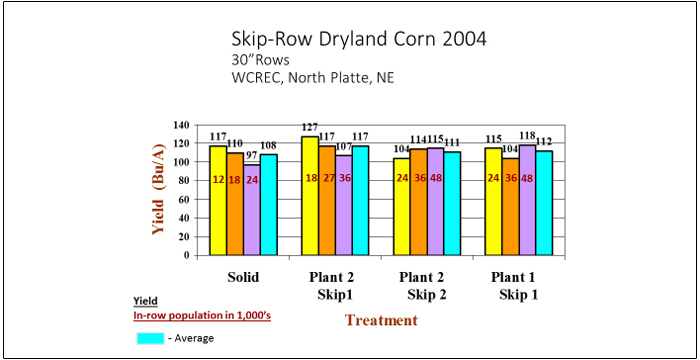 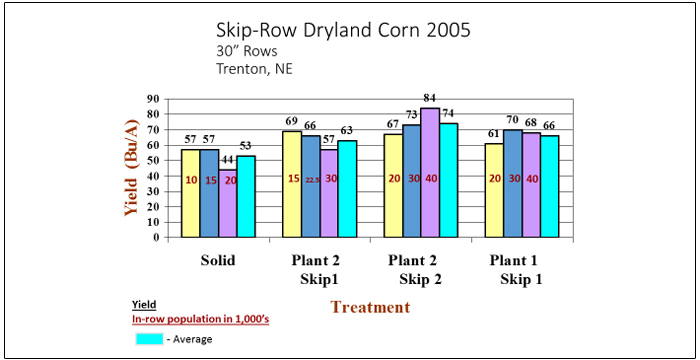 Figure 2. Yield of skip-row vs solid (30-inch rows) at three plant populations at Trenton in 2005.

At a higher precipitation area, the South Central Ag Lab (SCAL) near Hastings, 30-inch rows on solid corn planting were compared to two skip-row planting configurations (Figure 3). The highest yield was in the plant two, skip one treatment at a population of 45,000 plants/acre in the planted rows or 30,000 plants/acre if you include the skip row. 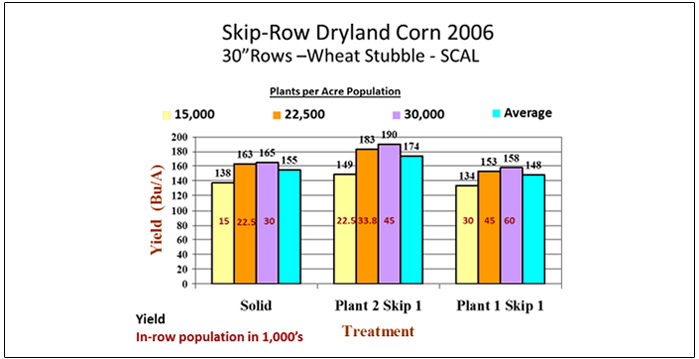 Figure 3. Skip-row dryland corn yields in 2006 at the South Central Ag Lab at various corn populations with solid, plant two skip one and plant one skip one configurations.

Table 1 lists the yield possibilities for skip-row corn in a plant two, skip one configuration and Table 2 lists yield possibilities for a plant two, skip two configuration. In an Iowa study where six rows of corn were planted next to six rows of soybeans, the outside corn rows yielded 20% more on average. If we use 0.5 lb ears as the standard, we would expect the rows in a skip-row to be at least 0.6 lb ears, maybe 0.62 lb ears, since there is no corn row next to them.

The greatest benefits can be derived from ecofallow corn. Ecofallow is the period between winter wheat harvest and planting a no-till crop the following spring into the undisturbed winter wheat stubble.