Wearable technology will soon move from wrist to stalk, swapping measures of blood flow and respiration for sap flow and transpiration.

James Schnable, associate professor in the Department of Agronomy and Horticulture, and colleagues at Iowa State University are developing a Fitbit-like sensor to be worn by corn and other thick-stemmed crops. Funded by a Breakthrough Technologies award from the National Science Foundation, the researchers are pursuing an elusive goal: measuring rates of sap flow in real time, actual fields, and changing weather conditions.

Because sap flow indicates how much water a plant is using vs. conserving, measuring it with hourly or minute-by-minute precision would help researchers better understand how crops are responding to drought conditions. That, in turn, would allow researchers to compare the drought resistance of different genetic lines with greater speed and accuracy, Schnable said, leading to more water-efficient hybrids that can tolerate ever-harsher climates from Nebraska to Nigeria.

“There are different strategies plants can take and different strategies plant breeders can pursue depending on their goal, the environment they’re breeding for and the crop they’re working on,” said Schnable, associate professor of agronomy and horticulture. “All of these, though, do require (that) you actually be able to look at how much water the plant is using, not over just an entire growing season but really on a day-by-day or hour-by-hour basis.”

Understanding water use is especially important, Schnable said, given that a plant’s ability to resist drought competes with its ability to produce food. When a plant opens the tiny pores in its leaves to welcome the carbon dioxide essential for photosynthesis — and eventually, food — some of its water escapes through those same pores, making it more susceptible to drought. Crops bred for higher yields invite in even more carbon dioxide, giving water more opportunities to depart.

Managing that physiological tug-of-war — or even finding ways to lengthen the rope at both ends — will become more critical by 2050, when the world will likely need to feed an additional 2 billion people while accounting for more-sporadic rainfall.

As of now, crop breeders usually assess new genetic lines by planting a series of trials under drought conditions, measuring the yields and comparing those yields to what’s produced in a water-rich environment, Schnable said. The smaller the difference in yield, the better.

“So they’re (currently) taking a lot of different things that could all feed into drought tolerance — they’re all lumped together — and they get this one output value, which is: What’s the final yield,” Schnable said.

The research team — which also includes Schnable’s father, Patrick, at Iowa State — instead wants to pinpoint the conditions under which different crop varieties begin or stop conserving water, potentially helping customize varieties to different climates. Pairing those observations with genetic analyses of the varieties could also offer more detailed information about the practical influence of various genes in the field, guiding modification efforts in the lab. 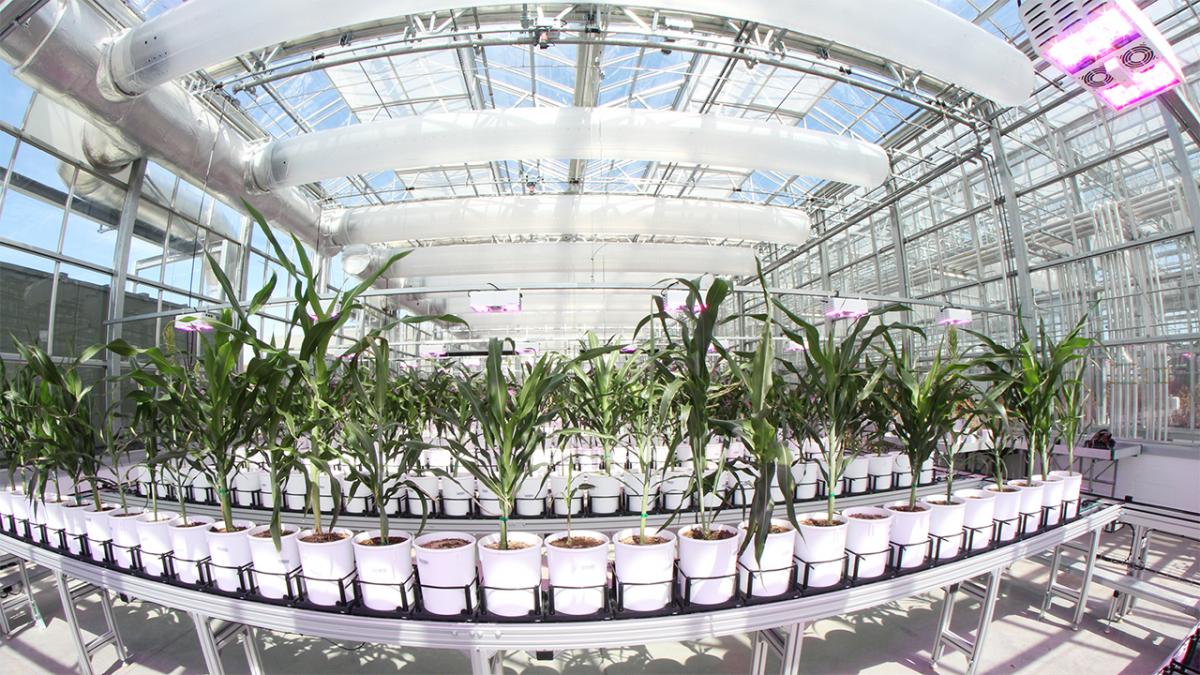 Figure 2. Corn being grown in the University of Nebraska-Lincoln Greenhouse Innovation Center (Photo by James Schnable)

“The more we can actually measure some of those (individual factors) in the field and look at the differences between varieties, the more we can make precise judgments about how two different lines with the same level of drought tolerance got there,” Schnable said. “You could separate those (different factors) out and then breed for those individual factors separately.

“Think of it like this: You can compare two cars by how fast they go or, once you can start to pull apart (and) look at different parts of the engine, figure out how each part of the engine works well or poorly, then maybe start to combine the best of different engines together. But you can only do that if you can measure the performance of different parts separately instead of looking at just the final speed.”

The team’s project qualified for the Breakthrough Technologies program — which the National Science Foundation developed for “high-risk, high-reward” pursuits — in part because no one has managed to develop a sensor that can monitor sap flow over a full growing season in the field.

But Iowa State’s Liang Dong has crafted a design, which consists of sophisticated technology packed into a small but flexible package, that the team hopes will prove equal to some of the most stubborn challenges.

To gauge the rate of sap flow, the bracelet-like device will administer small amounts of heat to the stem it fits around. Tiny sensors above and below the micro-heater will then record the amount of heat that passes by, effectively measuring how quickly the sap is carrying the heat away — and, by association, how fast the sap is flowing. A combination of nanoscopic structures and fibers within the device should help insulate the sensors, preventing a loss of heat that could otherwise invalidate their readings.

Its flexibility comes by way of an elastic band that can stretch to accommodate the growth of corn stalks or other crop stems, including those of soybean and sorghum, that can widen substantially within weeks. The elasticity also serves another purpose: allowing the device to monitor a stem’s diameter, which factors into the equations that describe how fast the heat is traveling and sap is flowing.

The answer? Compare the sensor data against a known quantity — in this case, finely calibrated technology at Nebraska’s Greenhouse Innovation Center. There, a series of conveyor belts, hyperspectral cameras and scales can detect faint changes in the water weight of individual plants that either do or don’t sport the new sensors. Then, it’s essentially just a matter of weighing one set of measurements against the other, Schnable said.

“That way we can tell if we’re producing useful data or gibberish,” he said.

It also captures what most excites him, on a personal level, about the project.

"Just getting to have those conversations and learn about topics I never would have been exposed to in any sort of a normal plant science job is really fun.”

Discovery Could Lead to Drought-Resistant Alfalfa

Plant-Soil Interaction Could Lead To New Ways To Combat Weeds