Tillage is a practice that can be used to manage crop residue, control weeds or prepare the soil for planting. However, the use of tillage can stimulate loss of soil organic carbon (C) to the atmosphere as carbon dioxide (CO2).

Losses of CO2 may depend upon the degree of soil disturbance. The loss of soil carbon can reduce soil productivity, increase the need for fertilizer inputs, and reduce farm profits. Thus, it is important to understand how different types of tillage may affect soil CO2 fluxes in the long term.

How Do Soil CO2 Fluxes Occur?

Carbon dioxide is the most abundant soil gas and is the result of a natural process called soil respiration. Soil respiration occurs through microbial metabolic processes that decompose soil organic matter. 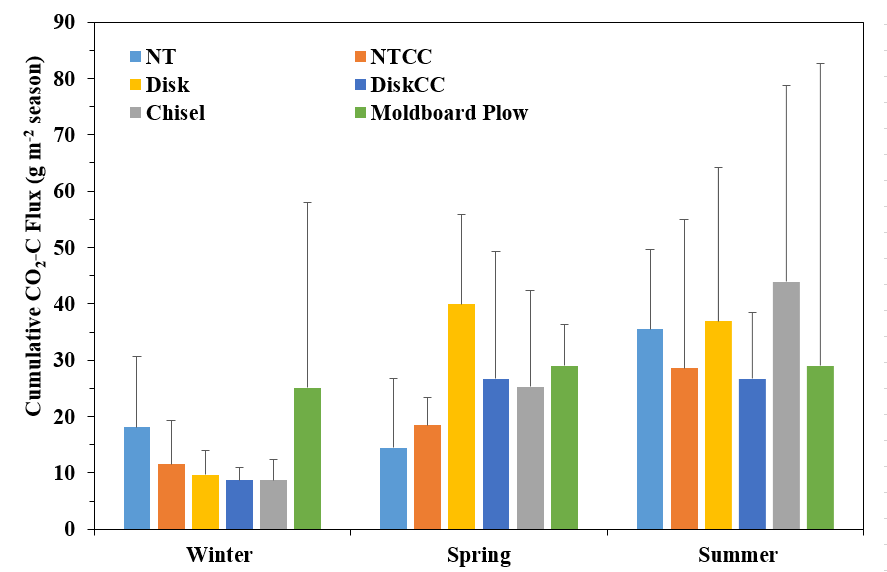 This means greater soil temperatures, reduced soil moisture, and potentially greater soil gas fluxes. In addition, a system under intensive tillage practices may result in increased CO2 fluxes due to increases in soil aeration and disruption of soil aggregates.

The alternative method to tilling soil is to use reduced till or no-till systems. Reduced tillage methods usually consist of minimal soil disturbance and allow residue accumulation at the soil surface, which can lead to soil moisture retention and reduced fluctuations in soil temperature, potentially lowering CO2 fluxes.

Depending on the environment, no-till ideally mitigates soil gas emissions from the soil, which in turn preserves soil quality.

Previous research has shown that tillage effects on CO2 fluxes may depend on tillage type and timing. Greater tillage intensity generally results in greater CO2 fluxes (Table 1), and effects of tillage are often confined to the days or seasons when tillage occurred. Tillage generally decreases soil bulk density and increases soil porosity by loosening the soil.

Changes in these soil properties are not, however, permanent as they tend to return to pre-tillage state due to natural reconsolidation, wetting and drying cycles, and other factors.

Results showed that tillage system did not affect seasonal cumulative CO2-C flux (Figure 3). However, within the season when tillage occurred (fall for moldboard plow and chisel, spring for disk, chisel, and moldboard plow), fluxes tended to be greater with tillage than with no-till. Fluxes tended to be greater in summer compared to winter and spring, likely due to warmer soil temperatures. 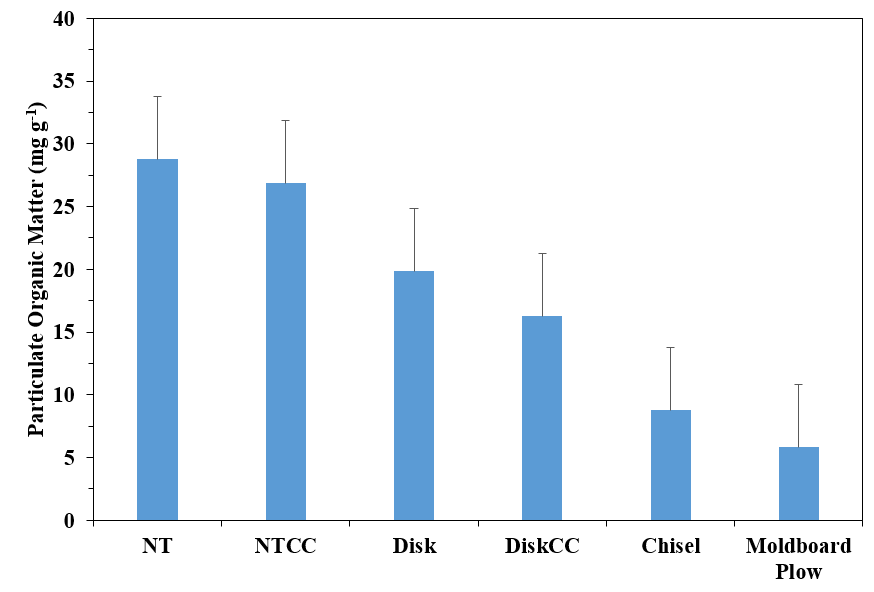 In spring, particulate organic matter concentrations were lowest in chisel and moldboard plow treatments compared to disk or no-till treatments, potentially due to soil disturbance and oxidation of soil organic matter.

Previous studies suggest that soil moisture and soil temperature affect soil gas fluxes, depending on season and tillage. Results from the Nebraska case study showed that cumulative CO2-C fluxes calculated by season tended to be greater with greater tillage intensity, particularly during the season in which the tillage occurred.