In contrast to continuous grazing, rotational grazing rotates livestock through several paddocks, with only one paddock grazed at a time while other paddocks rest. In practice, rotational grazing management has various levels of intensity (Figure 1).

Under extensive rotational grazing, usually 4 to 8 paddocks are used per herd and livestock graze on each paddock for weeks to months before moving to the next one. As the grazing system becomes more intensive, the grazing area is divided into more paddocks, and the cattle are rotated on a more frequent basis. Management Intensive Grazing (MIG) is an intensive form of rotational grazing, which generally utilizes at least 20 paddocks with very short grazing periods of 1 to 7 days followed by a grass recovery period of 60 to 90 days depending on the weather conditions (Teague et al., 2013)

Despite anecdotal evidence and support from consultants and government, adoption of rotational grazing practice remains low. According to the 2012 USDA agricultural census, 288,719 farms practiced some forms of rotational grazing, accounting for less than 30% of all ranching farms in the United States.

Our recently funded NIFA AFRI project, “Saving Grassland of the Great Plains: Is Management Intensive Grazing (MIG) a Socioeconomically Viable Option?”2, aims to provide a comprehensive analysis of MIG benefits across different regions to determine whether MIG is a win-win solution for both ranchers and society, to better understand factors that affect adoption decisions and the proper incentives government may provide.

This project will cover North Dakota, South Dakota and Texas, which are located on the Northern and Southern extremes of the Great Plains (Figure 2), a region with 19% of the cow inventory and nearly one third of the total grazing land in the nation (NRI, 2012). 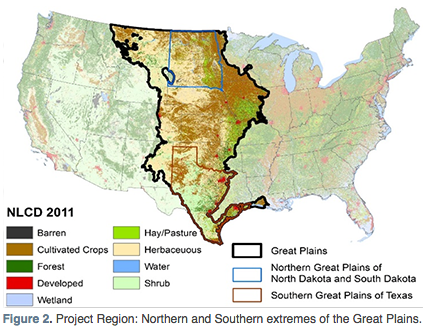 The overall goal of this multi-disciplinary effort is to investigate the economic, environmental and land use consequences of MIG practice in the Northern and Southern Great Plains of U.S., as well as barriers for non-adoption and incentives to overcome such barriers, to help ranchers to increase profit from rangeland and pasture, while decreasing surface runoff and increasing soil infiltration.