By Bill Spiegel posted on January 9, 2015 | Posted in Cover Crops

Switching to no-till and adding cover-crop mixes and finely tuned equipment helped Joe Swanson emerge from the farm crisis and find a new path to profitability.

By the time the farm crisis in the 1980s had abetted, and the oil crisis shortly thereafter, Joe Swanson was at a crossroads.

The Windom, Kan., farmer had been neck-deep in both industries. Farm interest rates had soared, and oil prices plummeted, from $25 per barrel to $8 per barrel in less than three months.

As he recalls, “I was a broke son-of-a-gun. We were losing money so fast it wasn’t even funny.”

Leaving the oil business, Joe and his father, Albert, focused on the farm. They had dabbled in no-till in the 1970s, but equipment and crop-protection products weren’t as conducive to the practice back then.

They had an International Cyclo Air planter, to which they added Acra Plant shoes and extra weight to plant grain sorghum and soybeans. The practice worked, “but we ruined that planter,” Swanson says.

He couldn’t do conventional tillage and no-till at the same time, so Swanson chose no-till. His goal — besides staying in business — was controlling soil erosion. Even though central Kansas soils are reasonably level, rills and gullies still occurred. No-till, Swanson reasoned, would help fix those problems.

Fast forward 30 years, and Swanson’s vision that no-till would solve these problems was prescient.

The simple no-till operation from the 1990s has blossomed. Crop rotation, cover crops, fine-tuning equipment and taking care of the soil are the tenets of Swanson’s no-till philosophy.

A Myriad of Mixes 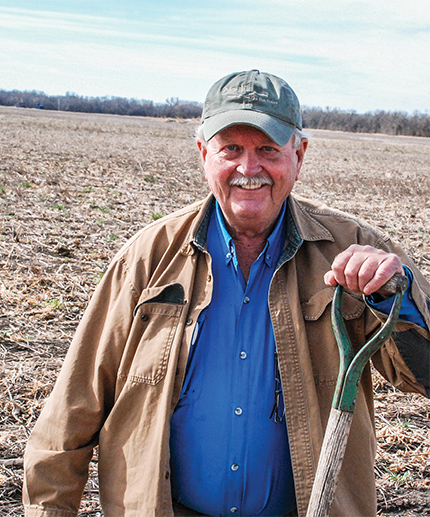 “My father was a real good influence when it came to farming. We had already done a lot of crop rotation. We even planted some green cover crops. We used a lot of the same mentality then that I used now, but we just used tillage,” Swanson says.

Swanson adopted cover crops in 1997, at the urging of his crop consultant, Matt Hagny. He was one of the first in the state to plant sunn hemp, and he conducted a variety of test strips involving single-species covers.

“We found that those single species cost us more to plant than we received in yield increases,” he says. “Before long, we began planting multiple species of covers. It’s a whole new paradigm.”

Like many no-tillers, Swanson was introduced to the benefits of cover-crop mixes during a visit to Gabe Brown’s farm near Bismarck, N.D., during a No-till on the Plains bus tour in the late 1990s.

It was hot and dry that summer, and Brown’s single-species covers were nearly dead. Mixes of two and four species were slightly better.

“We walked by the 8-way and 10-way blends and all of a sudden there were a whole bunch of plants growing. It just blew me away,” Swanson says. “That’s when I came back and we started messing with cocktails.”

There is no set cover crop mix, but cereal rye is a mainstay in most of the mixes. 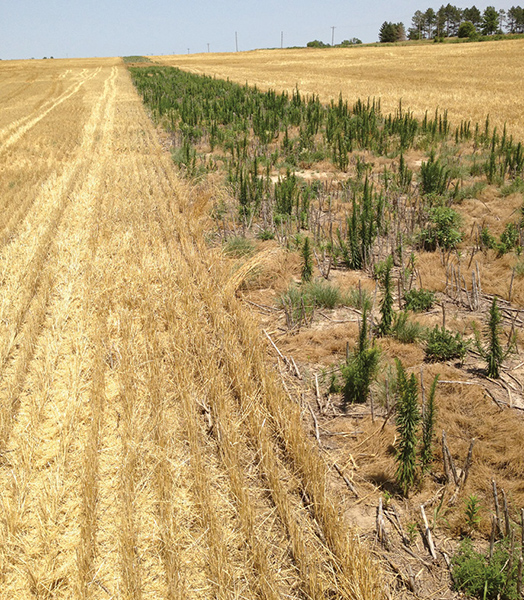 “I love cereal rye. If we can plant it the end of August, we can mix it in quite a few things, like vetch, rapeseed, radishes and winter peas, and get a lot of benefit. That gives us a cover from fall to spring, and we will plant soybeans into that residue,” Swanson says.

He aims to plant 25-30 pounds of cereal rye per acre, 10 pounds of another grass and 10 pounds of legumes. He also plans to try a companion mix of sunflowers as a cash crop following wheat, mixed with cowpeas, forage soybeans or mung beans, plus lentils, safflower and buckwheat, which he prefers as a great pollinator species.

“These are all broadleaves, so we can use Select herbicide to get the volunteer wheat killed post emergence,” he explains. The seeding rate altogether on this mix is 20,000 seeds per acre, with companion crops adding 10 pounds of seed per acre.

“All these seeding rates are hard to project, because we’re always at the mercy of our soil moisture,” Swanson says.

These crops will be harvested with a MacDon draper header, as Swanson hires a custom harvester.

He would like to test corn in a companion-crop system, just for the diversity it brings.

A new program he started this spring is to seed a cover-crop mix into native pasture for a neighbor to extend the grazing season. The mix features spring forage oats, spring triticale, forage peas, Dwarf Essex rape and Winifred brassicas into a native grass.

“We seeded these in early March and expected grazing to begin in May. He will graze it hard for 20-30 days, and then pull the cattle off,” Swanson says.

It is just a test, but he’s eager to see how it turns out. If successful, he could find a new niche for adding pounds of beef for minimal cost.

Finally, the mixes work to transfer nutrients from deep into the soil to the surface so the next crop can use them. Before starting no-till, soil organic-matter levels on Swanson’s farm were in the low 2s, but now many of his fields are 3.4% or higher.

After years of continuous no-till, Swanson notes that commercial fertilizer and herbicide applications are reduced, as well as weed problems.

“I’m amazed at how we’ve cleaned up our fields. I think that’s because we’ve done a good job of rotating and not letting them go to seed on our broadleaf crops,” he says. 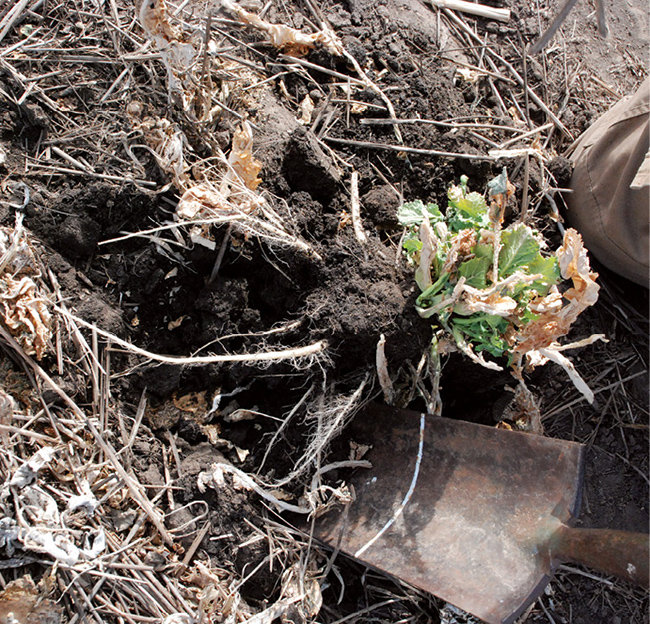 In the spring, Sharpen, 2,4-D and glyphosate, plus crop oil, are used as a burndown. For post-emergence applications, Degree Xtra is used in sorghum. Soybeans are all glyphosate resistant.

Incorporating rye as a cover crop, for example, suppresses weeds and eliminates at least one herbicide application.

Yield goals for cash crops are 70 bushels an acre for wheat, 120 bushels per acre for grain sorghum and corn and 40 bushels for soybeans.

Fertilizer applications are based on soil tests and yield goals. Nitrogen is typically applied as urea prior to planting; phosphorous, zinc and 10 pounds of nitrogen are applied as a dry blend with the seed. If a topdress nitrogen application is necessary, it will contain Agrotain to make nitrogen more stable.

Each year, the rig gets a complete rebuild. Blades, pins and all major wear points are replaced. He covers 6,000 acres each year with the seeder, and it still looks new. 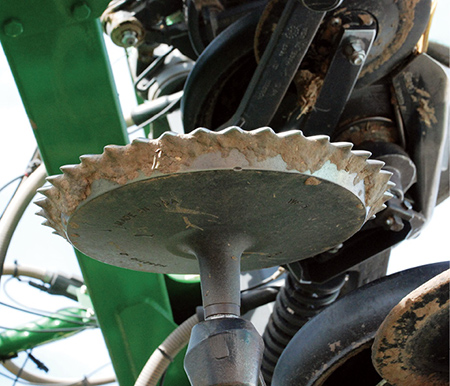 A poor job of planting can get the crop off to a bad start, and chances are that crop will never fully recover, Swanson says.

“You’d better set that seeder correctly and use the right attachments,” he reasons. “I’ve seen guys with brand new seeders doing a lousy job of planting because they don’t have it set right.”

The rig has been fitted with replacement blades from Exapta Solutions that are sharper than the factory versions, he says. Gauge wheels and closing tabs from Needham Ag also replace Deere’s original versions.

He has added 1,600 pounds of extra weight to the wings and 1,400 pounds of weight to the center of the air seeder. Video cameras are mounted in each of the commodity-cart tanks to see how much product is left.

Swanson also has a new Apache 1025 self-propelled sprayer equipped with a 90-foot boom.

Bringing on Another Generation

Swanson has big plans for the future. His daughter and son-in-law, Tove’and Darin Brunk and their kids Ashton and Eli, farm with him.

They’ve talked about adding cat tle to establish an intensive grazing operation that would diversify income opportunities and cycle nutrients back to the soil via manure.

“I’m not really wanting to go buy a bunch of cattle, but we have a neighbor that works with us really well,” Swanson says. “It’s a great deal for him and it’s good for us.”

They plan to grow some buckwheat and spring barley for cover crop seed, although adding seed-storage infrastructure will be necessary. And Swanson will continue to explore new cover crop species and mixes.

“I love what we’re doing. I love research, technology and science,” Swanson says. “It sounds corny, but once you see the results of a system approach to farming, you start to see yields improve.

“It’s a blast,” Swanson says. “This is what life should be all about.”