On the north shore of Lake Ontario stands a piece of land that is circled by bays and inlets of the great lake. It’s here where Eric Kaiser has farmed for more than 40 years. With 950 acres of cropland surrounded by Hay Bay, off the Bay of Quinte, Kaiser farms the heavy clay soils with his son, Max.

It’s not considered prime farmland. The area’s natural beauty and views of the lake has made it more of a home to cottages and summer retreats. Still, Kaiser has transformed it into productive no-till farmland.

In addition to no-tilling corn, soybeans and winter wheat, Kaiser has 26,000 laying hens and raises 100,000 ready-to-lay pullets. What pullets they don’t use, they wholesale to other farmers. They grow the grain, grind their own feed, sell the soybeans, buy soybean meal back and use all the manure in their operation on their farmland.

With the exception of a few inputs needed for the land or for the poultry, it’s a fully self-sufficient operation.

“This makes our operation about phosphorus neutral,” Kaiser says. “We spread the manure and grow more grain with it. The only fertilizer we buy is generally a liquid starter and nitrogen for the wheat and corn.”

The crop rotation is no-tilled corn, soybeans and winter wheat.

“It’s not as extensive as we’d like, but we’re really growing chicken feed,” Kaiser says. “We’re generally harvesting soybeans and no-tilling wheat at the same time. We hope to get wheat in by late September.

The clay content on Kaiser’s farmland runs better than 50%. The entire farm has been tiled.

“If it weren’t tiled, I couldn’t farm it. There are basically only three options: grow trees, plant timothy or tile drain and no-till,” Kaiser says. “Consistent tillage wrecks the organic matter, and tillage in the spring is difficult.”

And it’s taken Kaiser nearly 40 years to find more efficient ways to farm it. “I’m still trying to learn how to farm,” he adds.

Kaiser injects poultry manure after wheat harvest. It’s a challenge, he says, and they’ve yet to perfect an injection system that gives them consistent results.

“The problems are twofold: the manure from the starter pullets has a lot of feathers in it. And we’re trying to inject the manure into heavy clay soils,” Kaiser says.

August is chosen for injection because soils are usually the driest, and compaction is least likely to occur. However, it’s also tough to get the injectors into the hard soils.

Feathers in the manure are a problem at application. Kaiser has about 600,000 gallons of manure to place on 300 acres, so there are only about 2,000 gallons applied per acre.

“We have a 15-foot rig with 10 injectors, so getting the manure distributed is a major issue,” Kaiser says. We can’t use a small hose because it will plug with feathers. With a large hose, the manure tends to flow down three or four injector hoses, so we don’t get uniform distribution.”

This year, the Kaisers are going to modify the manure distribution system once again.

The entire setup weighs about 125,000 pounds loaded, and all tires are set at 14 psi front to back.

“The combination gives us enough volume to get done in 7 or 8 days. We like the current system, but we’re hoping to tweak the injectors to ensure uniform spreading,” he says.

After manure is injected, the Kaisers plant a five-ingredient cover crop of wheat, oats, oilseed radish, peas and some corn from the bin. They apply 115 pounds per acre of the mixture through a fertilizer spreader. To incorporate the seed, they lightly scratch the ground with a field cultivator with an attached packer.

“The oats and wheat are there primarily as a nitrogen sink,” Kaiser says. “The oats and wheat in the cover crop will tie up the nitrogen in an organic form. The other parts of the cover mix will die off in the fall, and the wheat and oats are killed off with a glyphosate spray in October.”

The mix is part of Kaiser’s belief of diversity.

“More diversity is important because different plants have different root systems,” Kaiser says. “More variety is better for the soil.”

While nothing is in a large volume, it does offer an interesting field picture. He’s adding to his crop cover mix this fall, adding in a sudan/sorghum hybrid and buckwheat. 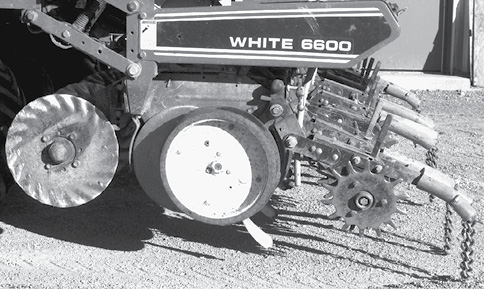 Kaiser plants all the farm’s crops with a White no-till planter. “We plant corn in six 30-inch rows from about mid-April to early May,” he says.

The planter then undergoes a transformation, with Kaiser adding row units to make 17 rows at 9-inch spacings for no-tilling soybeans and wheat.

“It’s a modified planter that started as a White 6606 with interplants for soybeans on 15-inch centers,” he says. “In its current configuration, we plant corn on six 30-inch rows and soybeans and wheat on 17, 9-inch rows,” Kaiser says. “We plant all our corn first, weather permitting around April 16. Then the planter undergoes its transformation, about a day’s job, to the 17 rows .”

Row cleaners are used only for planting corn along with a modified Martin system. The row cleaners are not used in the soybean and wheat configuration. Kaiser also utilizes Case IH depth gauge wheels, Keeton seed firmers with starter fertilizer tubes, Martin spading closing wheels and drag chains on the corn rows. Starter fertilizer is not used for soybeans.

Kaiser started farming at his present location in 1968. He has since bought land that allowed him to join nine individual farms into one unit.

It’s taken him many years to remove fence lines, add drain tiles and transform the ground to what it is today. He tried corn-on-corn in the early 1970s, then barley and canola. Wheat was added in the late ‘70s.

A few soybeans were tried from time to time in the beginning, but weed control was difficult until Roundup Ready soybeans became available. A switch to the current wheat, corn and soybean rotation was completed in 1994.

In the mid-80s, Kaiser determined that he needed to drastically change his farming operation. Tillage wasn’t working, and it was taking a toll on the land, his machinery and himself.

He first turned to chisel plowing, cutting the fields in a diagonal pattern “to level out 200 years of moldboard plowing,” he says. By 1994, Kaiser was 100% conservation tillage, making one pass with the chisel plow in the fall and one pass of the cultivator in the spring.

“It took a while to get to no-till,” Kaiser says. “I wanted to go to no-till back in the mid-80s, but it took me 15 years to get the land ready. Today, a tractor, combine, planter and sprayer are all the equipment I own.”

Kaiser says the change to no-till was built on necessity and his desire to improve.

“We are on a point in Lake Ontario. I’m the only farmer for the last 10 miles of the point,” he says. “It’s an inland waterway with cottages all around. My neighbors aren’t farmers.”

He also saw a need to improve the soil to farm while protecting the environment.

“It bothered me to see brown water headed to the lake and brown snow in the winter. I saw the soil moving,” he says. “I knew we couldn’t keep farming like that. The question was how get to the point of being able to no-till both financially and physically.