What I've Learned From No-Tilling: Perseverance, Equipment Updates Are Mainstays For No-Tiller's Success

More than 20 years learning, adapting equipment and expanding crop rotations to include small grains and cover crops are a winning formula for Wisconsin no-tiller

With the dire economics agriculture faced in the early 1980s, there was no opportunity for me to join our Wisconsin family farm operation. But farming was my first love and you might say, I was blessed.

After working a short time at a Milwaukee foundry, I was asked by the owner if I would help with planting crops at his 280-acre farm and beef cattle enterprise near Jackson, Wis. He must have sensed my intense desire to farm because he later offered me the opportunity, just after my 22nd birthday, to take over as manager.

The soils of Washington County in southeastern Wisconsin are rolling, with stones and high bedrock left behind by the glaciers. A rock picker is standard equipment on nearly every farm. And even after clearing a field, conventional tillage just brings up a new batch.

It was one of the primary reasons we first considered no-till. If you don’t disturb the soil, we figured the rocks would stay below the surface. Our first efforts at no-tilling, however, left us less than impressed.

On our home farm, we experimented with one of the industry’s first no-till corn planters, the 800 introduced by International Harvester in the 1970s. It may have been our inexperience as much as the machine, but nevertheless, yields dropped enough to be alarming. We went back to tillage.

Back in the early ‘90s, Art Gehring, an independent crop consultant from Slinger, Wis., alerted me to the National No-Tillage Conference (NNTC). He said it was a great source of cutting-edge, conservation-farming information. It turned out to be a fruitful conversation. 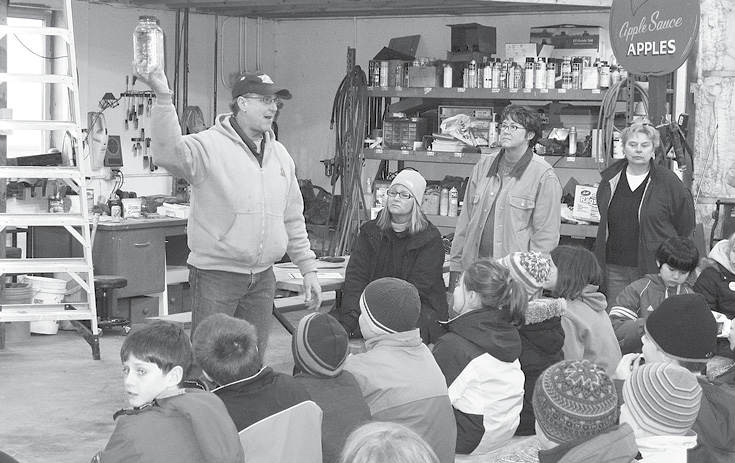 Following his advice, I attended the 3rd NNTC held in Indianapolis in January1995. From the presentations and workshop talks I had with other farmers, I took home a whole new enthusiasm to make no-till work.

I’ve attended every NNTC since and have never failed to leave without at least one or more money-saving ideas.

Within the next year, I had retrofitted an 800 IH Cyclo planter for no-till. Fortunately, I have natural talent for mechanics and had learned a lot in the farm shop from my two older brothers. I added Yetter combo 13-wave coulters with rigid trash wheels and Rebounder seed firmers.

This setup worked well in tilled soil. However, yields were inconsistent, especially in heavier soils where it was more difficult to get uniform seed placement.

But because of the encouragement I received at no-till conferences, we were determined to keep trying. Successful growers told me that if I wanted to make no-till work, I would find a way.

Today, more than 99% of the farm is continuous no-till and our yields are consistently equal or better than nearby conventionally tilled farms.

We began to see longer-term benefits of no-till as we got into our fourth year. Most of the rocks really did stay below the surface, with only a few working their way up from the freeze-thaw cycle.

Earthworm populations exploded. Night crawlers became my new tillage tools. The honeycomb effect they have on the soil is extraordinary.

I can drive into a field after a rain and hardly leave a tire track. Crop roots find their way down worm holes, while worm castings add to the soil nutrient balance.

The Shift To 20-Inch Rows

As our acreage expanded, we reached a point where we needed a new planter. I had heard a lot of positive things about Marion Calmer’s success with narrow rows.

I attended a couple of his seminars. Though I could see advantages to 15-inch spacing, I decided to go with 20-inch rows. It would allow me to drive my sprayer between the rows without having to switch to narrow tires. I would also be able to get through a field of 20-inch rows with sidedress fertilizer applications.

In 1997, we bought a John Deere 1780 six-row, 30-inch corn planter with the option of 15-inch spacings. Our local dealer added two rows to the bar, converting it into an eight-row, 20-inch machine. 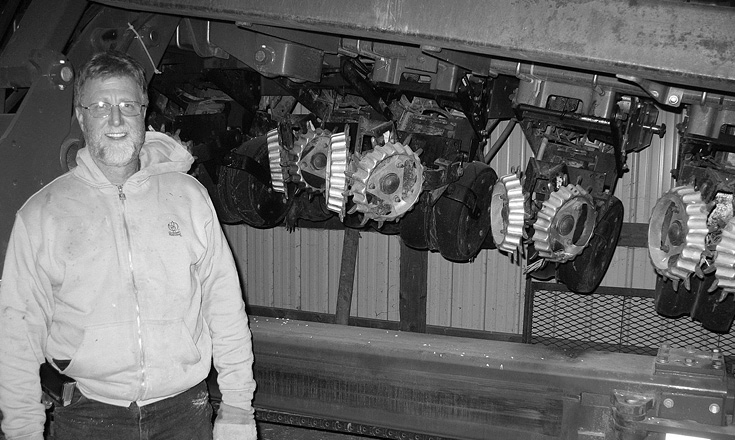 We set it up with the same no-till attachment configuration we had on the older IH planter. At that time, we also purchased a 20-inch corn head.

With this new planter, we were convinced no-till was the way of our future. The positive effects from minimal soil disturbance were more noticeable each year, while our per-acre fuel and labor costs were reduced even as we added more acres to the farm.

By 2000, I was challenged to finish planting on time with the eight-row machine. I was convinced that the Case IH 1200 Early Riser planter unit with Advanced Seed Meter (ASM) would provide superior seed placement and depth control.

Unfortunately, the company did not offer a machine configured in 20-inch rows. A company rep assured me, however, that it was possible to convert their 12-row, 30-inch machine into a 16-row 20. He didn’t say what a challenge it would be.

But farm-shop experience again paid off. On March 12, I started tearing down and converting the new 12-row planter. Less than a month later and after many days working on the machine from 8 a.m. to midnight, I had a 16-row, 20-inch planter ready for the field.

It wasn’t easy. I had to create and weld a number of frame changes so the additional four row units did not interfere with the pivoting of the planter’s wings.

I added Yetter attachments for 28% liquid nitrogen up front. The frame wheels had to be offset so they did not track directly over the 20-inch rows. We also added tanks to the tractor to transport starter fertilizer.

I also designed and welded together a system of no-till attachments, including Yetter coulters, Martin floating row cleaners, Martin spading closing wheels and Schaffert Rebounders for firming the seed and applying starter fertilizer.

The total rebuild added about $24,000 to the cost, but I ended up with a planter I wanted and it was something I could not buy at that time.

After 5 more years of no-till and as the soil tilth continued to improve, I decided that coulters were no longer needed and ran only the trash whippers to clear residue.

I’ve added down-pressure springs to compensate for the limited 200 pounds of maximum down pressure allowed by the design. On some heavy soils, I’ve found 200 pounds is often not enough down pressure to get good soil penetration.

This year, I’ll consider retrofitting the planter with pneumatic down-pressure units now available from the manufacturer.

Over the years, I’ve compared drilled soybeans with those of a corn planter. We first used a John Deere 750 drill, and it was at that time the best (and only) machine we could buy for no-tilling soybeans.

Later, we traded up to a John Deere 1560 drill, which allowed us to plant in 15-inch rows by lifting up the rear gang.

In my case, soybeans seeded with the planters consistently do better than drilled beans. I attribute this to the precise seed-metering systems on planters.

Also, I have found that soybeans in 20-inch rows seem overall healthier than those in 7.5- or 15-inch rows.

Soybeans are planted between the old 20-inch corn rows.

In 2008, with the reduced population, I had to adjust the angle of the soybean head to capture the lower-growing pods, and that helped me pick up 5 bushels per acre.

Our nutrient management plan factors in feedlot manure, commercial fertilizer and credits from legumes (alfalfa and beans). In the future, we’ll calculate a nutrient credit for cover crops. Soils are tested every 4 years to determine fertility needs.

I base fertilizer rates on a 120-bushel-per-acre county average corn yield, the average for our county.

Manure applied at 8 to 9 tons per acre provides 35 units of plant-available nitrogen. So, after adding up nitrogen credits, I usually apply only about 70 to 80 pounds of additional commercial nitrogen where we spread manure.

We were once told by conservation officials that manure must be worked into the soil, which, of course, would not be compatible with no-till.

A Knight Side Slinger spreader has been the answer for the past 15 years. A free-swinging hammer mechanism breaks the manure and bedding into small pieces and spreads it uniformly.

Over the past year, I’ve investigated a power-plant-produced, gypsum-like byproduct that is a good source of calcium and sulfur. My goal is to improve soil sulfur levels, bring soil pH levels into the neutral range and enhance soil tilth.

In 2008, I started experimenting with deep-rooted annual ryegrass planted after winter wheat harvest in early August. 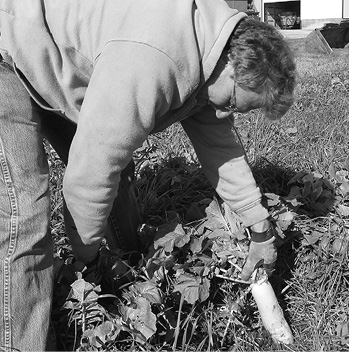 The annual ryegrass did an awesome job of reducing weed populations in the wheat stubble, but it survived the winter under a heavy snow cover and I had to spray twice before planting. On the plus side, some areas of that field produced better than 250 bushels of corn per acre.

In 2009, I grew 90 acres of annual ryegrass, mixing in tillage radishes on 40 acres. I was impressed by their size, how deeply roots penetrated the soil and how quickly they produced ground cover.

According to Steve Groff, the Pennsylvania cover-crop pioneer who has made several NNTC presentations, tillage radishes fit well into a no-till system like mine that utilizes corn, soybeans and winter wheat in rotation.

After hearing of the benefits offered by Austrian winter peas — reports say they can fix more than 200 pounds of nitrogen per acre — I’m going to follow Groff’s advice on growing a cover crop “cocktail” this year. It will include annual ryegrass, tillage radishes and winter peas planted on winter-wheat stubble prior to no-till corn.

It will be rewarding to see how much I might be able to reduce the load of commercial fertilizers.

Looking To The Future

Crop yields have consistently increased since 1994, when we first no-tilled. Today, after making several major equipment changes and refining our nutrient-management program, corn yields are well above the 120-bushel-per-acre county average.

Soybeans yields are consistently 5 to 10 bushels above average. In 2009, no-till winter wheat yielded 76 bushels per acre.

My wife and I have purchased the farm, which has expanded to 700 acres. We will continue to grow primarily corn, soybeans and winter wheat, with alfalfa acreage as needed as a fattening ration for about the 100 steers we feed out annually. Cover crops will be a key part of the rotation.

We’ll also continue to help explain why protecting soil and water is critical. For the last 16 years, we’ve hosted hundreds of fourth graders from nearby schools.

I enjoy telling them about our conservation-farming methods, how we feed cattle and especially the ways earthworms and soil microbes contribute to our no-till success.

After 28 years of piloting the expansion and agronomic changes on our farm, and now experiencing the thrills and challenges of ownership, I’m pleased that there seems to be no end of ideas to boost crop production while building soil quality.