Like any field operation, identifying and addressing compaction layers are important to maximize water infiltration, root growth and crop yields.

Compaction can be present in fields for a number of reasons. Normally it’s created when heavy equipment, wagons, trucks, tankers or spreaders make passes on fields when the soil is too wet to hold them. Even heavy planters, tractors or sprayers can cause compaction.

Compaction also occurs from tillage, usually just below the tillage pass. Discing and chiseling can create compaction if the soil is too wet when being worked.

So when moving to no-till, it’s a good idea for farmers to evaluate fields for compaction because this condition can really inhibit root growth and impact water infiltration.

If moderate compaction occurs in no-tilled fields, soil structure will expand and contract with frost and water movement in and out of the soil.

But when you’re forced to operate equipment when it’s too wet, you will have to remove compaction with a no-till ripper, or possibly try deep-rooted cover crops.

Just like soil testing and other important field operations, it’s crucial to evaluate compaction in no-till systems by locating field areas that may have this problem and gauge the depth and severity of the problem.

A common method is using a probe that’s pushed into the soil that indicates how much pressure was needed to penetrate compaction layers. A scale on the probe determines compaction depth.

Evaluate compaction in different areas of the field, and as you’re probing, make sure you’re doing it near the row and in between the rows. This helps you determine if compaction is related to the row or wheel-track area, or if it’s predominately in and out of the row area.

After identifying the location and depth of compaction, you’ll need to decide whether to remove it, or if nature will correct it with freezing and thawing — or if earthworms or cover crops would do this for you.

Light or moderate compaction may correct itself over time in some no-till fields, but if compaction is severe it may require a no-till ripper to loosen soil. Deep-rooted crops and cover crops are an excellent alternative.

Setting the ripper at the correct depth is key to correcting the problem. I was recently on a farm with a field in continuous corn silage that had some compaction layers. The field needed some work with a ripper. 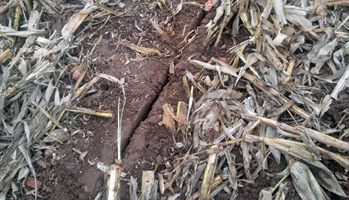 Initially, they made passes with the tool set too shallow, which caused too much surface tillage and didn’t address the underlying compaction.

Today’s rippers have a narrow shank that doesn’t create much soil movement — but the point’s aggressiveness can override the narrow shank and still move a lot of soil. So it’s important to use a point that is aggressive enough to remove the compaction layer without moving soil to the surface.

As the ripper goes through a field, it should lift and fracture the compaction and leave a narrow slot where the shank goes through. It shouldn’t look like the field was chiseled.

After the ripper has been used, take out your probe again and evaluate how well you’re doing, and make adjustments to the ripper if necessary. Make sure the ripper is set correctly before you rip the whole field and find out the compaction problem isn’t fixed.

Also, try to run the ripper when your soil is relatively dry to prevent further compaction below the ripper point. This generally lets you do a better job of shattering compaction layers.

Remember: Your goal shouldn’t be having to make frequent passes to eliminate compaction, and the earthworm life in your soils may not respond favorably to a tillage pass. Carefully select when you plant and harvest fields to avoid compaction and reduce the need for tillage.

No-Till Farmer's Conservation Ag Operator Fellow for 2022, Jim Leverich is a no-till farmer near Sparta, Wis. His 1,000 acre-farm has been in his family since 1864 and no-tilled since 1984. An innovator and educator, Leverich has 35-plus years of no-till and on-farm research experience, and possesses a deep, practical understanding of what makes no-till work. For his contributions while at the University of Wisconsin Cooperative Extension Service, Leverich was named the No-Till Innovator of the Year (Research & Education category) in 2006. A talented presenter and writer, Leverich was a regular guest columnist for No-Till Farmer in 2011 when it earned the Gold Medal as the nation’s top newsletter from the American Society of Business Press Editors.

Tackling Drainage And Compaction In No-Till