If you want to keep soil in place, you’re not going to do it by only growing corn and soybeans — no matter how many conservation practices you use, says Rick Cruse in a recently published article by the Leopold Center for Sustainable Agriculture.

In a webinar recorded last year, the Iowa State University agronomist and director of the Iowa Water Center shared a study that looked at cumulative sediment export between four treatments in watersheds that were less than 10 acres in size between April 10, 2008 and June 26, 2008.

“This is not a push on no-till,” Cruse says. “If it was done with conventional tillage, it’d be much worse. But no-till doesn’t do quite as well as we have been led to believe.”

He explains the reason for this is that soil loss equation models don’t include topsoil lost in ephemeral gullies — channels created in fields after a heavy rainfall — which he estimates account for 30% of topsoil loss.

What can be done about this? Cruse emphasizes that some fields and areas can only be sustainable if perennial crops are included, such as trees, prairie and pasture.

But if that’s not an option, cover crops are probably the next best thing. 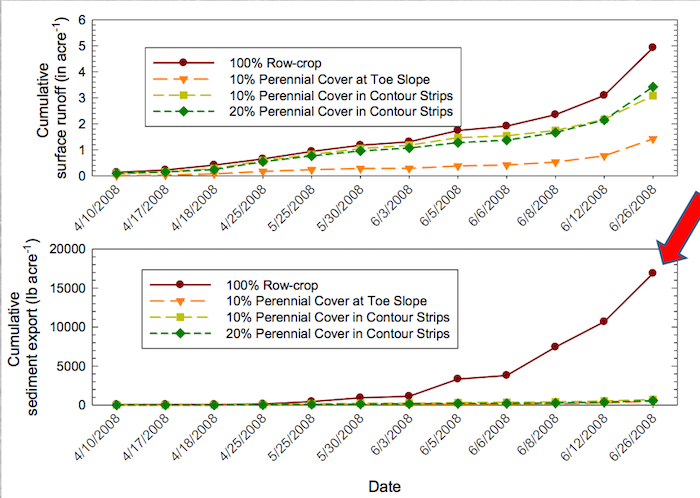 As harvest winds down this fall, consider seeding a cover crop if you haven’t already decided to do so. Terry Taylor, a Geff, Ill., no-tiller, shares his tips for using cover crops for the first time.

Taylor recommends finding out what cover crops your neighbors are using and develop a strategy based on what you want to accomplish with cover crops.

2. Choose a cover crop species that has a high probability of success in the area.

At this point in the fall in the Midwest, cereal rye may be a good option because it can be planted later, whereas legumes need an earlier start.

3. Start with just one species, as it will make management easier.

For more information and tips from Taylor, check out the article “Cover Crops: Starting is the First Step.”

What practices are you implementing with no-till to prevent more soil erosion? What tips would you recommend first-time cover crop users follow this fall? Leave your thoughts in the comments below.

Prioritizing Soil Health to Protect Profitability for Generations to Come