If you looked at the conditions in the Texas Panhandle Plains, in and around Lubbock, you could make a case that it’s a poster child for no-till practices and additional soil cover.

Calvin Trostle estimates there’s about 2 million acres of bare-soil farming in western Texas, and he’d like to change that by convincing more growers to start using no-till and experiment with cover crops. Some progress is being made, albeit slow, says the Texas A&M AgriLife Extension agronomist out of Lubbock.

A March 6 meeting in Lubbock about no-tilling and cover crops drew 65 people, including NRCS and Texas A&M researchers, equipment makers, seed industry representatives and crop consultants. Seventeen farmers attended the event, but Trostle had hoped for a lot more.

There’s still some formidable resistance in the region to changing rotations away from continuous cotton, he says. Many farmers try to stop their sandy loam or loamy sand soils from blowing away by deep “listing” their fields with tillage down to 12 inches on 40-inch rows.

Trostle says farmers with irrigation have backed off listing by seeding wheat or rye in the fall, terminating it in the spring and planting cotton into the killed vegetation to protect delicate cotton seedlings. About 1 million acres of this practice has been adopted in his area, he says. 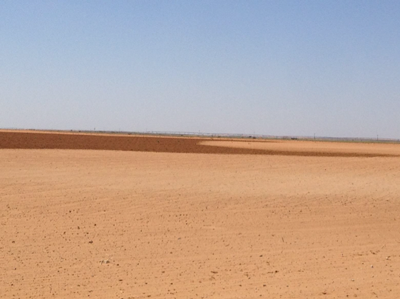 BLOWING FIELDS. This field in western Texas was deep "listed" or rough tilled to keep it from blowing, but the wind was strong enough to blow the treatment down and erode the soil, says Texas A&M AgriLife Extension agronomist Calvin Trostle. The darker area in the background is soil that hand't blown. 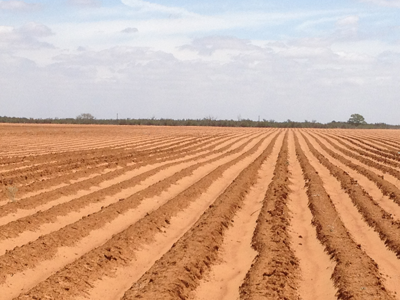 NO RESIDUE. This field in Dawson County in western Texas was deep listed to prevent soil from eroding, but strong winds have punished the field and blown sand into the furrows, says Texas A&M AgriLife Extension agronomist Calvin Trostle.

Noting that 75% of the cropping in his area produces little or no stubble, Trostle has tried to warn farmers that, in addition to listing, plowing under failed crop stubble to “grow organic matter” only destabilizes soil structure further.

“Where will our land be in 20 years? Hopefully it’s no-till with some type of residue with cover crops,” Trostle says. “That’s my picture for what this region needs, because our land will have to move on without dependence on irrigation. I think we can then farm it for a long time, even with climate change.”

One farm in the Texas Panhandle has taken a step forward with no-till. Below, you’ll read about Cody Gruhlkey and family, who no-till 6,000 dryland and 2,000 irrigated acres in primarily a wheat-cotton-fallow rotation near Kress, Texas, about an hour north of Lubbock. Through 17 years of no-tilling they’ve reduced crusting issues to improve cotton emergence, and wheat yield are recovering.

“To succeed in no-tilling you have to get your mind set to it. When you make peace with yourself that it’s all up to Mother Nature, it takes a lot of stress off of you,” Gruhlkey says.