Through hosting no-till field days, and adopting the practice on their own farm, R.N. and Ronnie Hopper are trying to raise awareness of the benefits of no-till on the Southern High Plains of Texas.

R.N. (left) and Ronnie Hopper of Petersburg, Texas, have adopted no-till in their own farming operation, and are also championing the practice among fellow farmers in the southern portion of the Texas High Plains. The Hoppers are planning their second no-till field day at their farm in August.

Ronnie Hopper and his son, R.N., see a trend toward less tillage on the Southern High Plains.

They ought to know: The Petersburg, Texas, farmers are already a part of this trend, having no-tilled since 2006 when they took it up after growing mostly cotton for the previous 8 years.

They see more dryland farming as inevitable. Already, 30% of their own farming is on dryland acres. Drought has impacted dryland crops they have grown in recent years, as has the challenge of matching crops to small dryland acreages on sprinkler pivot corners.

“Economics are going to lead us into a dryland situation. I grew up believing that water was our most precious resource,” Ronnie says. “Now, I still think of water as precious, but the soil is the most precious. We can live without irrigation, but not without a healthy soil.”

Ronnie says that 2-3 years into no-tilling they saw the benefits of soil building.

“We saw improved economics through input and water savings. Now, our focus is on soil building and crop rotation,” he says. “We’re working with Texas Tech University in Lubbock and Cotton Inc.  to quantify some of the biological benefits of soil building. We want to bridge the gap between soil science and crop physiology.”

Kater Hake of Cotton, Inc. visited the Hopper farm after the Beltwide Cotton Conference in January to get a first-hand look at the potential for no-tilling in cotton production in the Southern High Plains.  Hake was impressed with the possibilities he saw for the Texas High Plains. 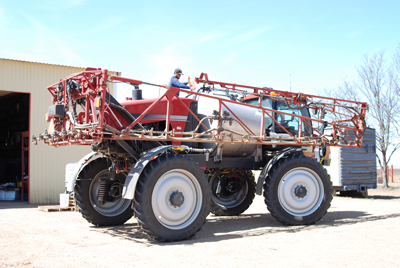 NO-TILL WORKHORSE. This Case 3330 self-propelled sprayer, sporting a 100-foot boom and 1,000-gallon tank, is the weed-control workhorse of no-tilling for Ronnie Hopper and son, R.N. The father-and-son team took up no-tilling after growing mostly cotton for a number of years. By varying weed control chemistry, they’ve managed to elude problems with herbicide-resistant weeds, so far.

While lofty goals are important to the Hoppers, they also must make a living. While they irrigate most of their acres, more dryland farming is in their future. They’ve had misgivings over planting cover crops in dryland no-till and drought situations, due to concern over lack of sufficient residue — particularly when they have to plant covers late following cotton harvest.

They pin their hope of building soil organic matter on a crop rotation that includes grain crop residue, which helps to hold soil moisture.

Cotton and wheat play lead roles on their farm, R.N. says, but they also follow markets and have included sunflowers in the cropping mix.

“Corn has been our money crop, and cotton fits the puzzle too. When the food corn market is favorable we grow both white and yellow food corn under irrigation,” he says. “Over a 2-year period, we really don’t think corn uses any more water than cotton in no-till.

“If you’re after 3-bale-per-acre cotton yields under irrigation, cotton uses a lot of water. Under dryland conditions, we have a 500-600 pound-per-acre yield goal for cotton.”

Both Ronnie and R.N. emphasize that management requirements for no-tilling are far greater than with tillage. While they’ve dreamed of a fixed rotation, what they plant is often driven by crop prices.

Their rotations have included cotton, corn, sunflowers and black-eyed peas. They may sometimes follow corn with corn, but they don’t follow cotton with cotton. 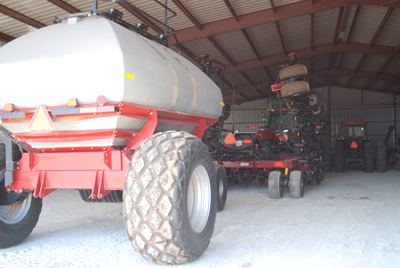 VERSATILE SEEDER. To plant wheat, triticale and other crops, R.N. and Ronnie Hopper use this Case IN SDX 40 no-till air seeder on 10-inch spacings and 22-inch opening discs (inside barn), trailed by the Case IH ADX 3380 air cart (foreground).

“We’ve learned that when we use wheat as a residue crop to be followed by cotton, the taller the stubble the better,” R.N. says.

“Getting into continuous no-till is very much about working with Nature. No one stands toe-to-toe against Nature and wins over time,” Ronnie adds.

For wheat and triticale plantings, the Hoppers use a Case IH SDX 40 no-till air seeder on 10-inch spacings with 22-inch opening discs, trailed by a Case IH ADX 3380 air cart.

They use a 24-row Case IH Early Riser 1255 planter with pneumatic down pressure and Martin row cleaners for cotton and corn. 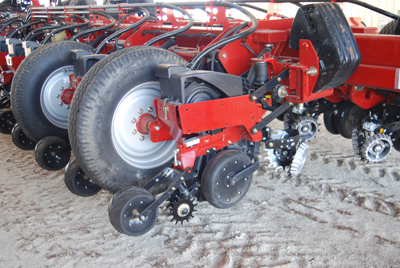 PRECISION PLANTER. This 24-row Case IH Early Riser 1255 planter with pneumatic down pressure and Martin Till row cleaners gets the job done in planting no-till corn and cotton for Ronnie and R.N. Hopper on their acreage near Petersburg, Texas.

This is done so that peak water demand periods are spread out with 1/3 in June, 1/3 in July and the final third for cotton in August, allowing them to maximize their limited irrigation.

Their equipment also allows them to seed sunflowers or black eyed peas.

Their weed-control workhorse is a Case IH 3330 self-propelled sprayer with 100-foot boom and 1,000 gallon tank. Tools at harvest include John Deere 7460 cotton strippers and a Case IH 8120 combine.

When terminating a wheat cover crop prior to cotton planting, they use a tankmix of Roundup, Valor and 2,4-D. R.N. says they will tweak the use of Valor in the system with a fall application to control marestail. They say planting corn or cotton works great in terminated wheat cover. 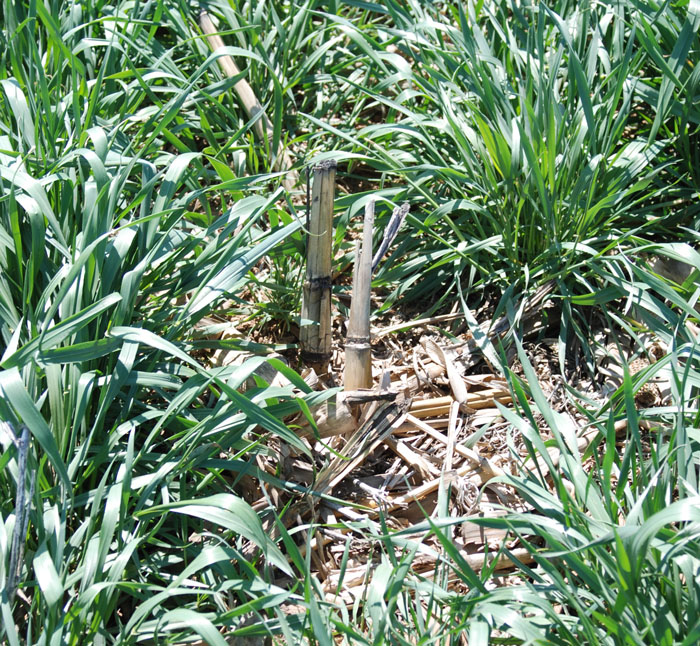 NO-TILL PROGRESS. The no-tilling succession of crops is beginning to fall into place on the farm of Ronnie and R.N. Hopper, who raise wheat, cotton, sunflowers and triticale near Petersburg, Texas. Above, thriving wheat grows up through last fall’s corn-crop residue.

While glyphosate-resistant Palmer amaranth an exploding problem in the region, R.N. says he feels no-till gives them a leg up on the issue. The Hoppers apply Valor pre-season in early spring, then apply Direx immediately behind the cotton planter, add a post-emergence spray of Dual, and at layby they apply Warrant.

“I believe we have a better chance to fight Palmer pigweed in no-till,” R.N. says. “Our chemical is in the top ¼ inch of the soil and that’s where pigweed germinates. The weed seed is right on top if you don’t till, so it will rot or be killed by residual weed control chemicals.”

They rotate numerous herbicide chemistries on corn and grain sorghum acres, and go to the expense and effort to have very clean fields. They feel leaving residuals undisturbed helps in the weed battle.

The Hoppers have been doing their bit to build acceptance of no-till farming in this region. Last August, they hosted a no-till and soil-building field day for farmers and NRCS personnel at their farm.

The Hoppers hoped the field day would get growers in the region to talk to one another about no-till techniques. About 60 farmers from within a 70-mile radius, and 30 NRCS personnel, attended. 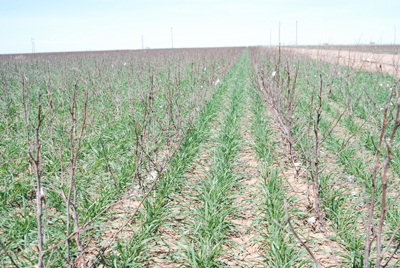 POWER OF WHEAT. Wheat may not always make grain when planted after cotton harvest, but this field on the farm of Texas no-tillers Ronnie and R.N. Hopper was growing vigorously this spring amidst standing cotton stalks. Often, wheat serves as a cover crop for a succeeding cash crop and is terminated with herbicide prior to spring planting.

Visitors saw and heard about what the Hoppers are doing amidst diminishing irrigation on their farm, and also heard from experienced no-tillers from the Texas High Plains.

Underwood stressed that converting to no-till is a long-term commitment that may not be easy at first, but should pay off in the long run.

According to Underwood, no-tilling in the Southern High Plains, “cuts against the grain with some people” but the event at the Hopper farm provided an opportunity to show what can be done.

“The idea was not a formal organization, but raising awareness among farmers who want to get started. We wanted to provide an opportunity to learn and hear from people who have been there in no-till and have experienced it,” Ronnie explains. “We hope the concept of people from our area being able to call on each other for help with no-tilling will take off.”

Prime advice from the Hoppers at their field day was to take advantage of the learning experience afforded by the annual No-Till on the Plains event at Salina, Kansas.

R.N. says thinks the best path to learning is to be able to get advice from those experienced in no-tilling.

The Hoppers are making preliminary plans for a second field day at their farm this  year, Aug. 27-28. They plan to offer the same program on both days in hopes of further introducing no-till concepts to more farmers in the area.

“We can see a long-term trend of a declining number of farmers in the Southern High Plains of Texas. Similarly, we can track a trend over the last 30 years of people plowing less,” Ronnie says. “I see no reason to think that either trend won’t continue through the next decade.

“As more farmers go to limited tillage and no-till, we should realize a correlating improvement in cover on the soil surface and soil organic content. That will mean improved water infiltration into the soil. We’ll need to store all of the soil moisture we can as fewer acres are irrigated. No-till can provide ecological and financial benefits. The farmers who remain will have a chance to make a good living.”