Results showed the ongoing strength of the no-till movement as the 60th anniversary of the commercial launch of the practice will be marked later this year.

Cover crops were applied to fewer acres this year, but farmers using the practice applied them to more land. 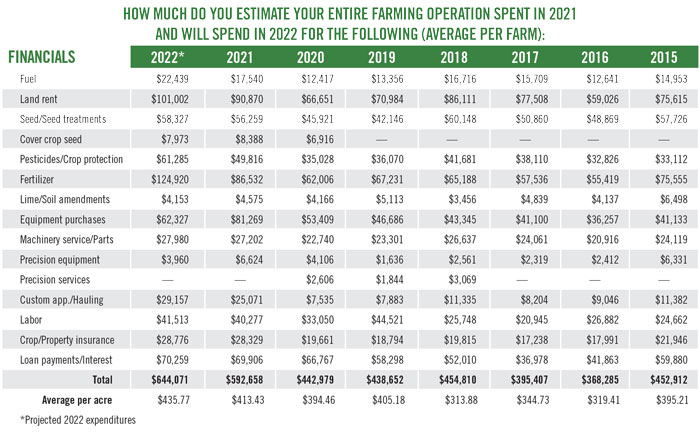 That distinction belongs to the 2019 edition of the benchmark survey. However, this year’s survey tallied the second-highest average farm size at 1,365, the second-largest percentage increase (17%), and the third-largest swing since 2015. The largest jump in average acres was 26.3% between the 2017 and 2018 growing seasons, followed by the second-largest swing between the 2018 and 2019 growing seasons, when the average acreage dropped 25.3%. 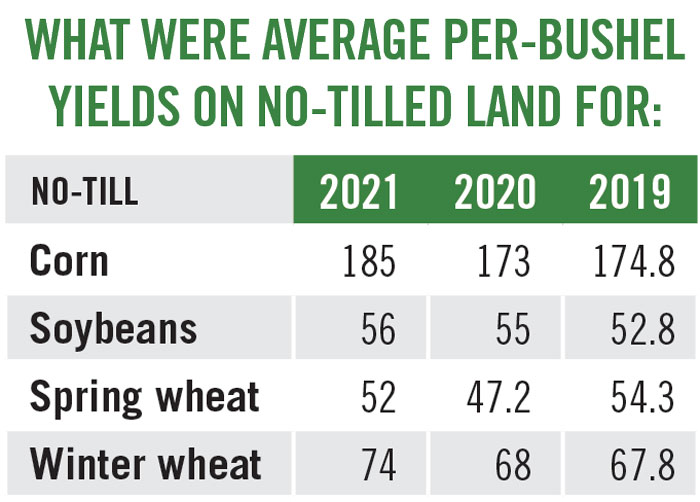 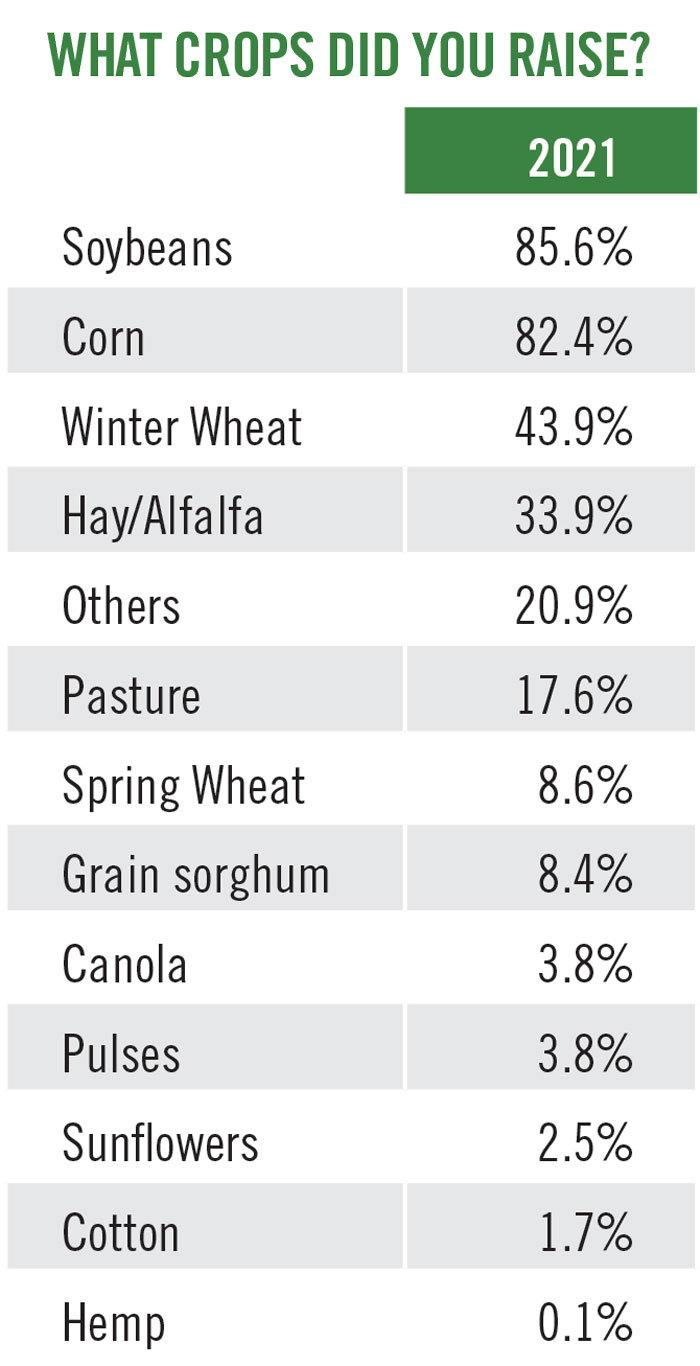 While canola tallied the largest average no-till acreage, a single Alberta farmer reported no-tilling 7,000 acres of canola (and also 7,800 acres of no-till spring wheat), one of only 11 farmers to report no-tilling canola. More telling, only about 3.8% of all grower respondents reported growing any canola at all. 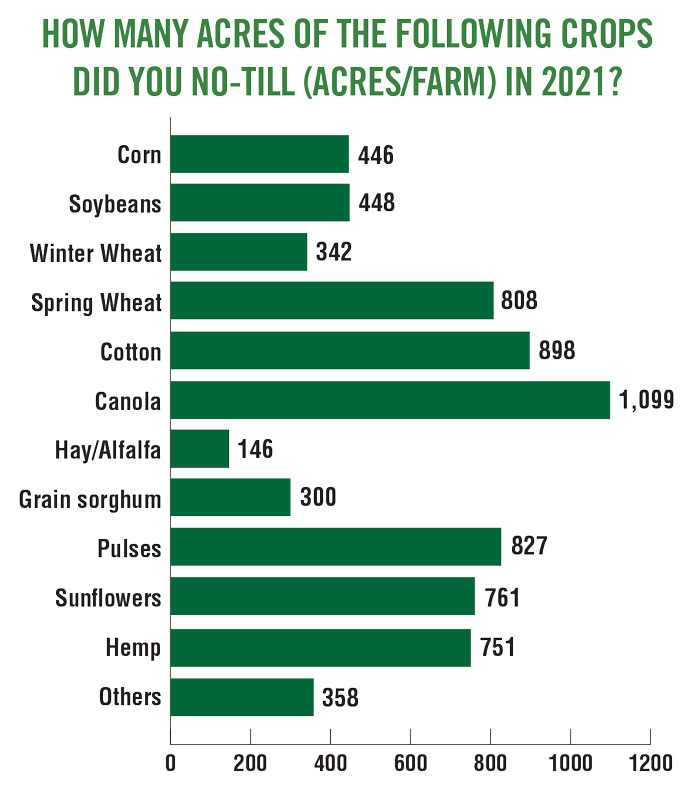 THE CANOLA CONUNDRUM. While canola appears to be leading the no-till acreage derby, the long bar above is attributable to both a small number of farmers (11) and one 7,000-acre no-till crop reported by a Manitoba farmer.

Organic no-till production grew an incredible 600% in from 2020 to 2021, mostly on the back of a single Manitoba farmer who reported 4,000 organic acres. Even once that admittedly large increase is removed from the calculation, organic acres grew about 300% between 2020 and 2021.

UP AND DOWN. Vertical tillage was the lone practice to show an increase for 2020-21. Other practices showed slight decreases in reported use.

These declines came after larger numbers of respondents reported increases each year for 2018-20. 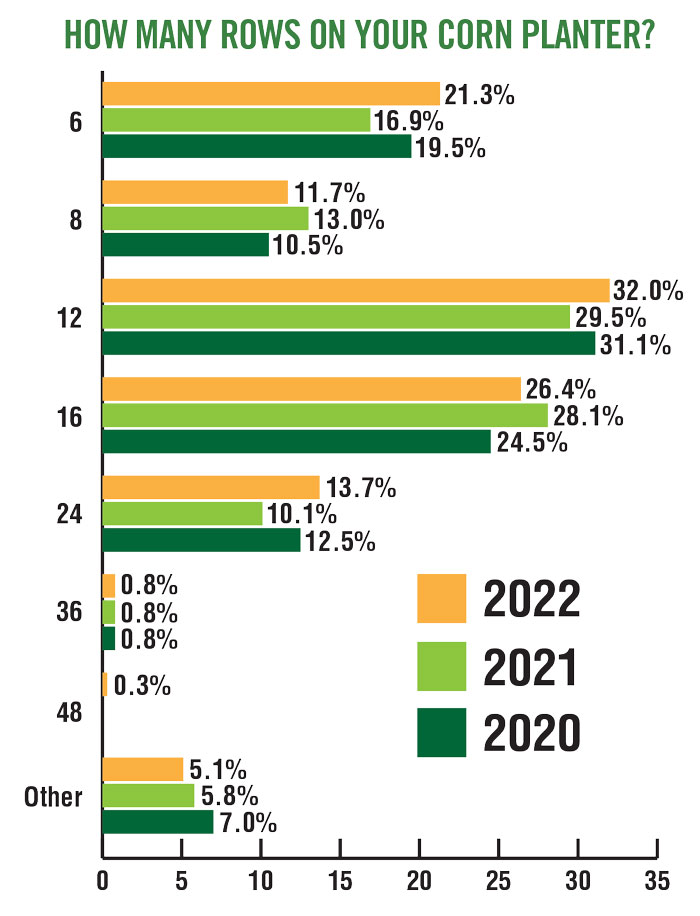 Cover Crops Down Overall, But …

Cereal rye retained its spot as the most popular cover crop species, at 73.5% of 2021 covers planted among respondents. Cereal rye jumped almost 8% from 2020

Among farmers who did plant covers, multispecies blends grew in popularity. About 77% of respondents reported blend use in 2021, a 5.8% jump from 2020. The increase comes after an 8.7% falloff for 2019-20, which followed single-digit percentage increases every year starting in 2016.

Grazing livestock on covers was marginally more popular among respondents this year, up to 26.3% from 22.4% in 2020. The 2021 figure is a record high since the benchmark survey began tracking the practice in 2018, when respondents reported grazing rates of 14.7% on all cropland, though responses indicate the practice is still relatively rare. 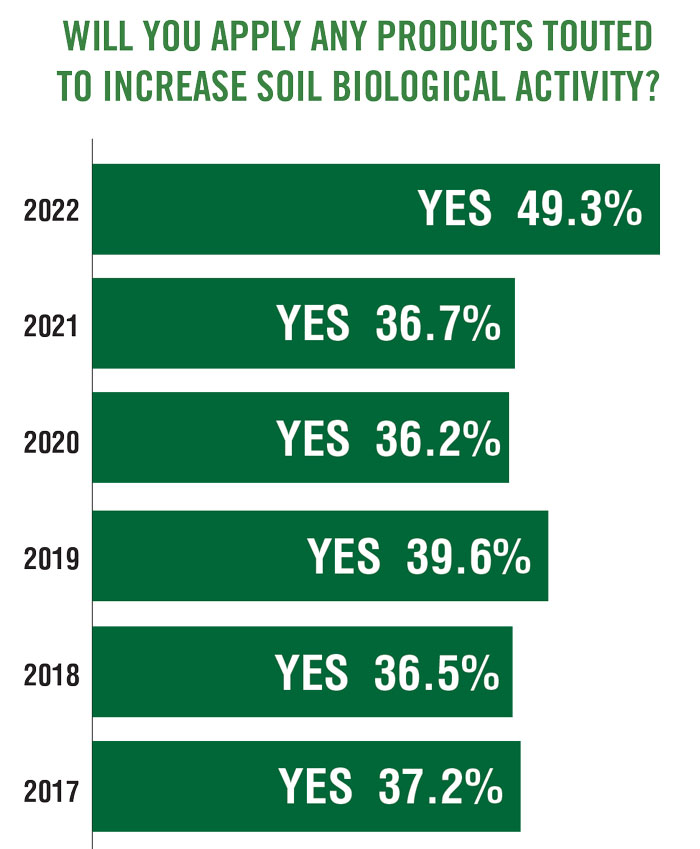 BIO BANG MAYBE? After years with moderate interest in biologicals, 49% of respondents plan to use them this year.

Biological soil boosters have been recorded in the benchmark since plans for the 2017 growing season, when growers reported 37.2% of respondents said they were planning to apply a product touted to increase soil biological activity. The number has stayed fairly stable in the high 30’s until this year. 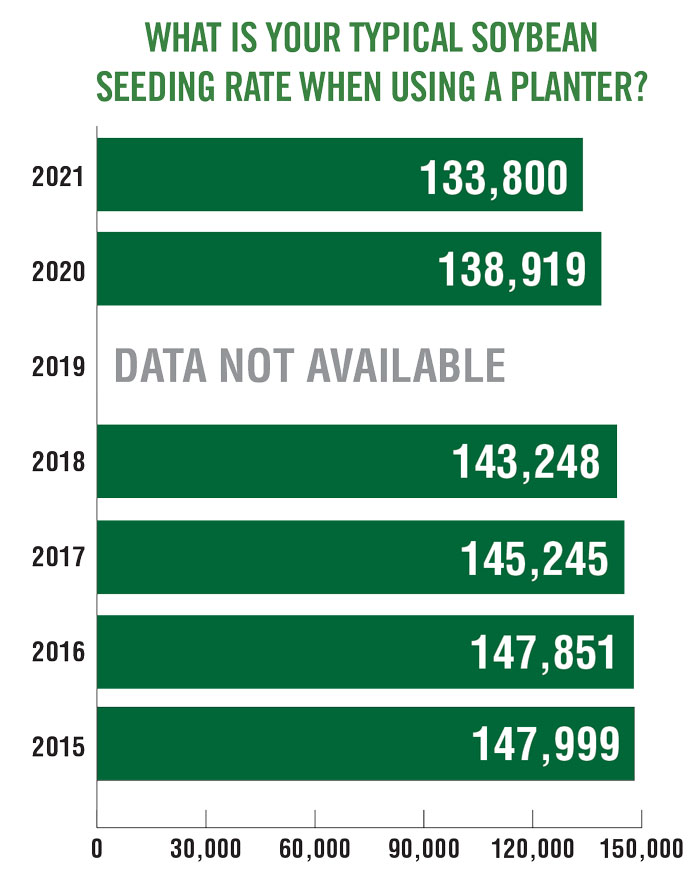 About 49% of respondents — almost half — say they plan to use biological agents this year. That’s an increase of 12.6 percentage points, after years of single digit swings, both increases and decreases. For the four years the benchmark survey has monitored plans relating to biologicals, the largest movement was a 3.4 point decrease in the percentage of growers who said they planned to use biologicals between 2019
and 2020. 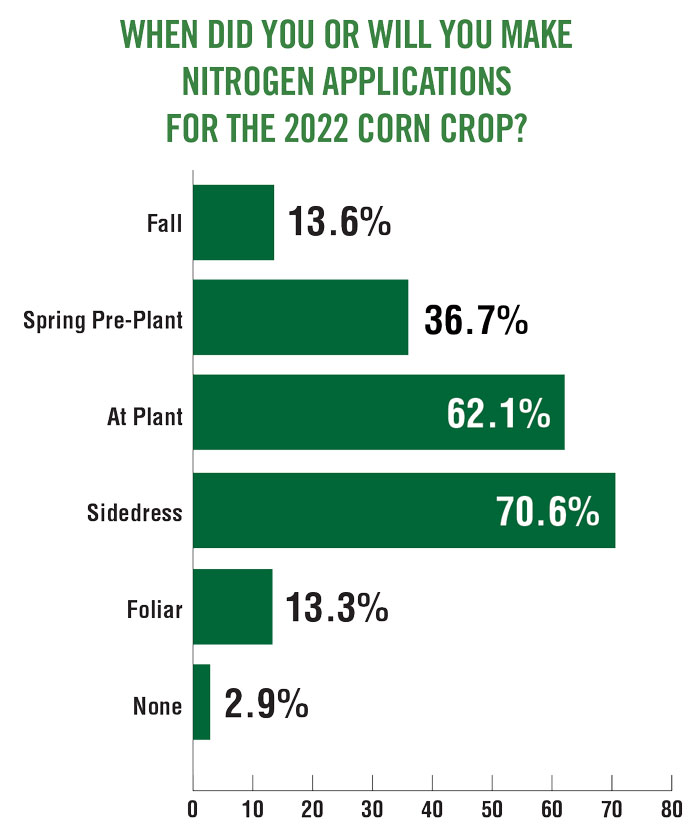 THE NTH DEGREE. Most respondents were focused on targeted applications amid blistering N prices.

And while academics and manufacturers recommend increased soil testing to determine needs for specific biologicals, the number of growers who say they plan to test annually remains less than a quarter (22.8%). Instead, the largest percentage of respondents was the 47.7% of growers who said they planned to test every three or more years.

The increased interest in biologicals also comes as domestic and global factors conspire to push up inputs. 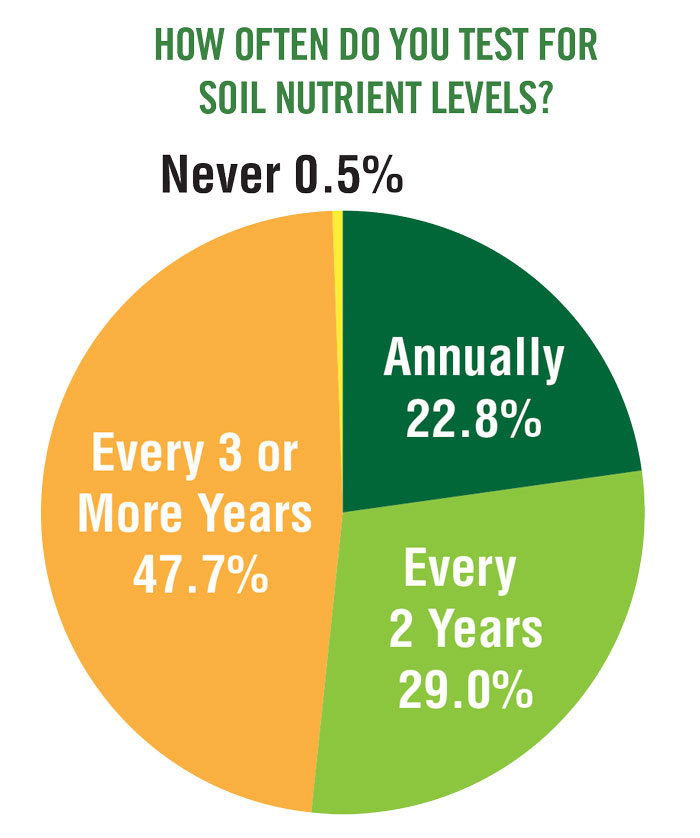 CUT WITHOUT MEASURE? While interest in soil biology is high, more than three-quarters of respondents say they’re conducting soil tests every other year or less frequently.

The trend is most pronounced for soybeans.

About 21.4% of respondents say they’ll fertilize with nitrogen this year, an increase of 3.2 points. Phosphorus showed a similar swing, a 4.3 point decrease in the percentage of growers who say they will apply phosphorus. Potassium, which saw a price spike amid U.S. sanctions against the major potash exporter Belarus, showed a double-digit decrease, from 71.6% of respondents who said they planned to apply K in 2021, compared to 61.4% who planned K applications in 2022. 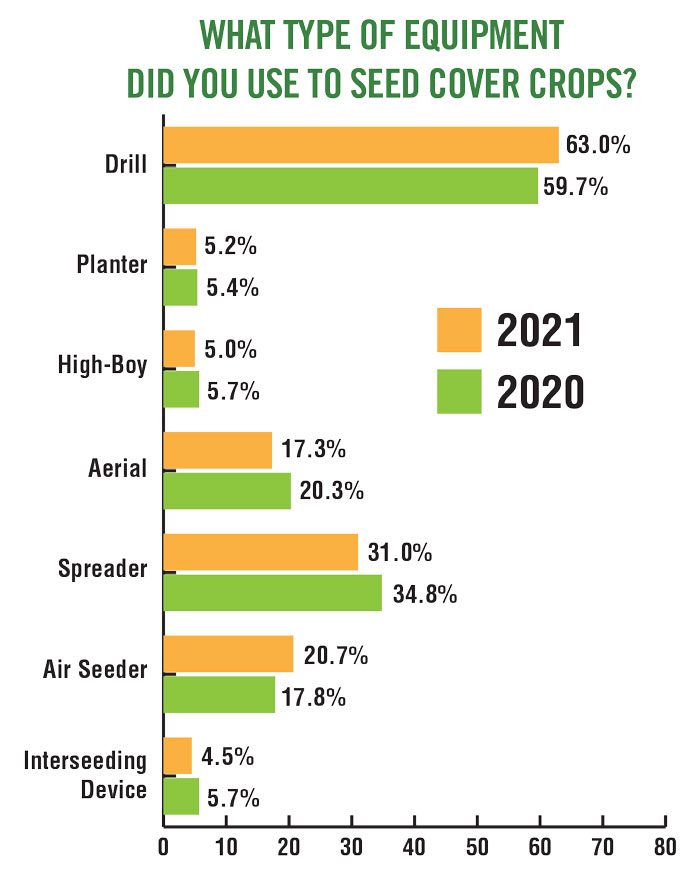 However, the largest swing of any kind was in the percentage of people who said they planned to add none of the major nutrients to their soybeans, which jumped to 24.3%. 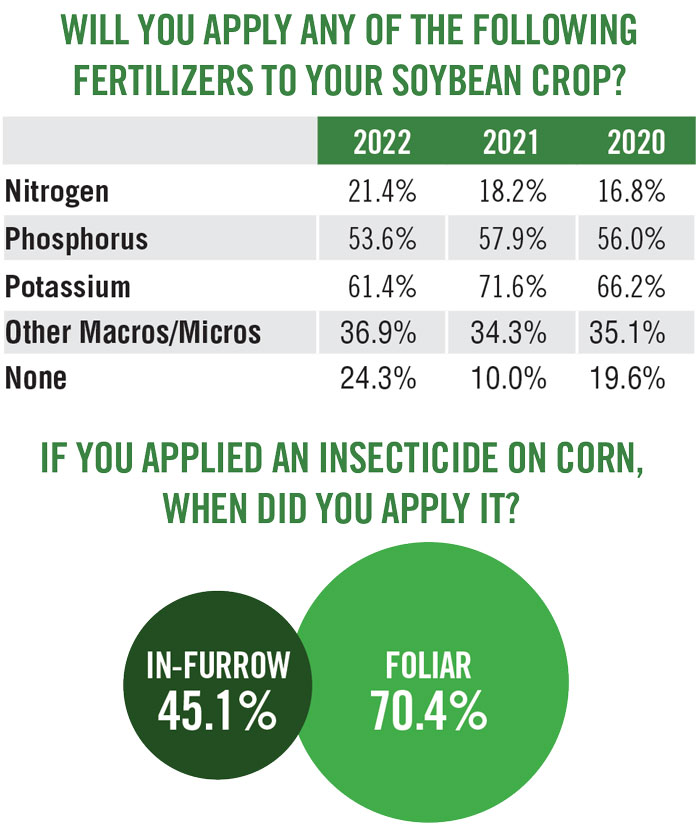 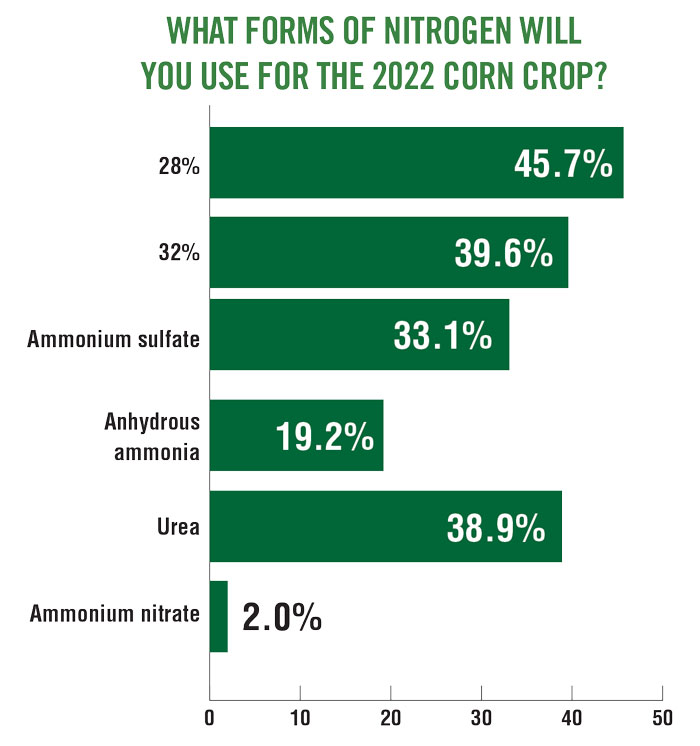 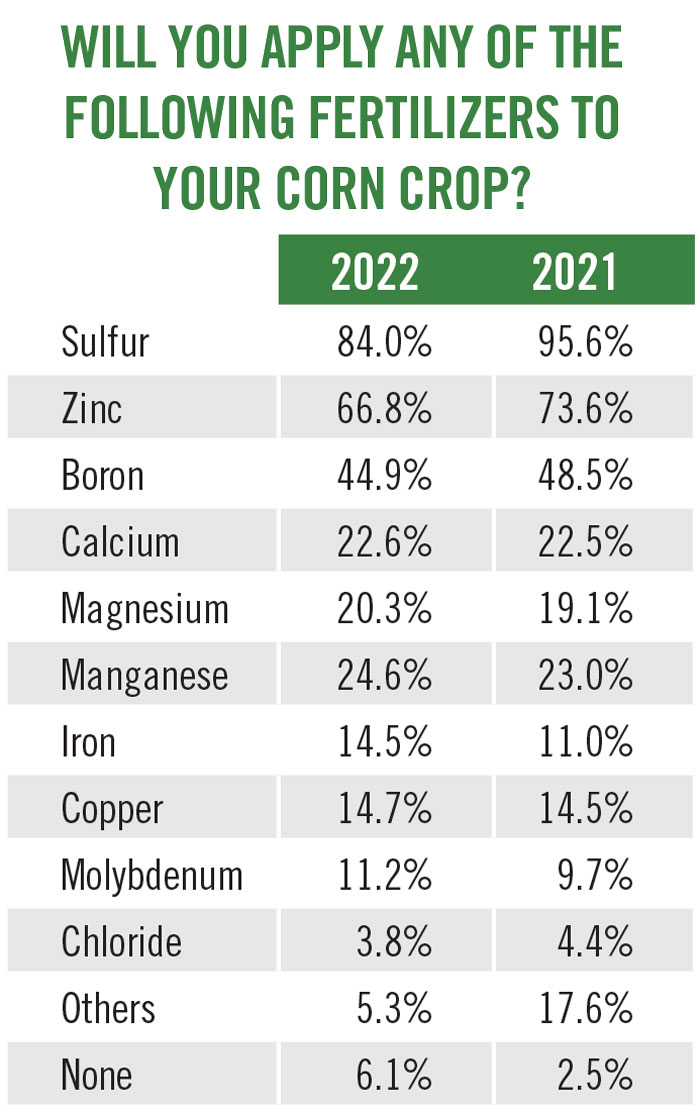 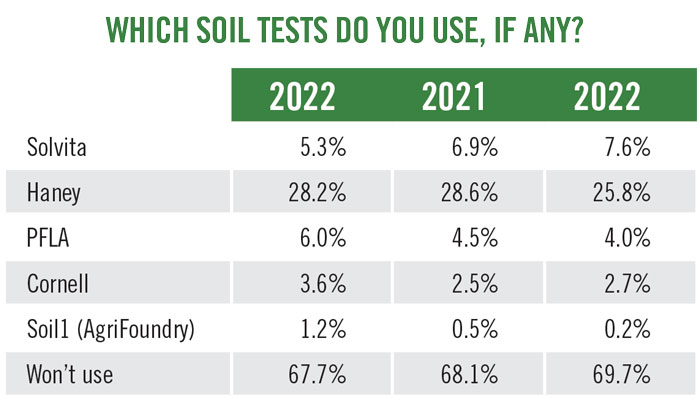 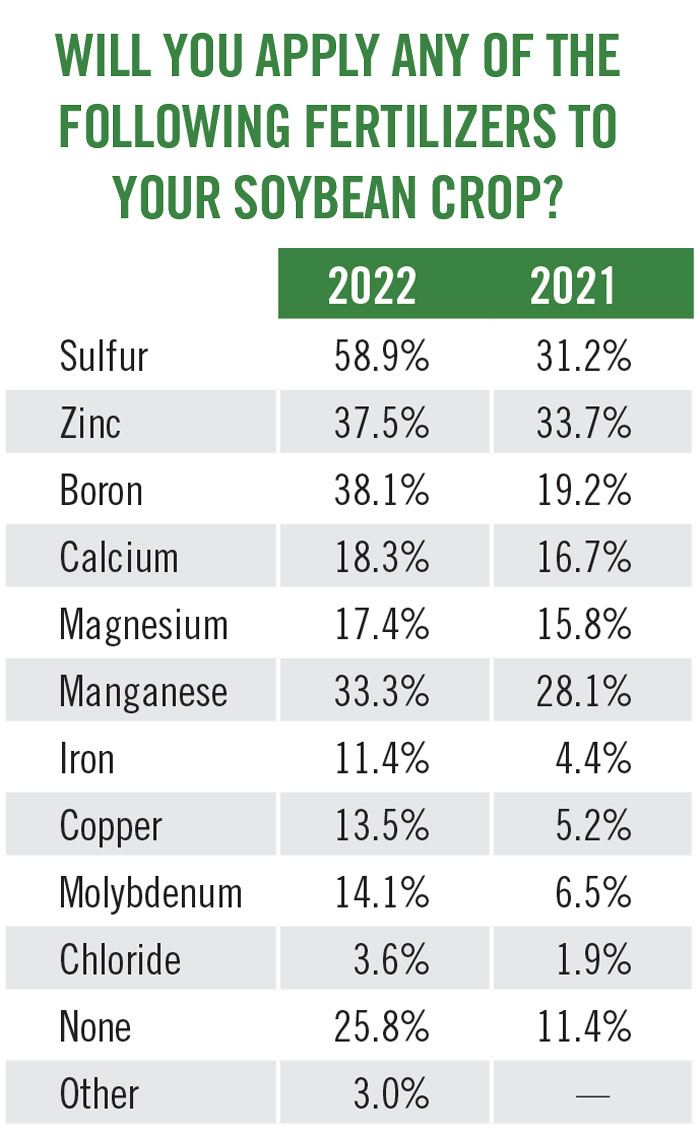 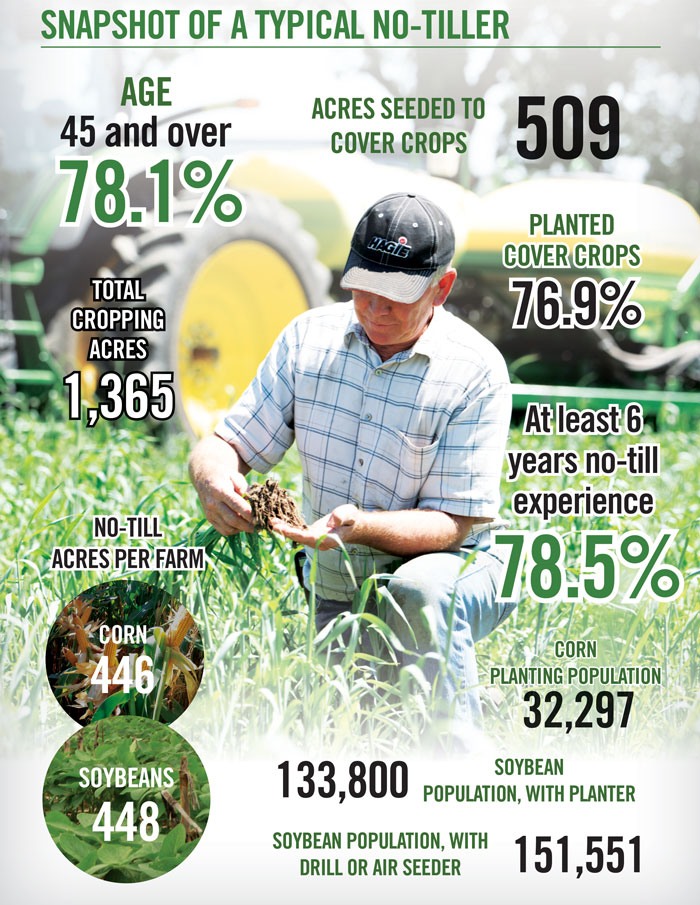 Cashing in with Cover Forages Between No-Till Wheat Crops