Who's Afraid of Regenerative Agriculture?

Through writing Upstream Ag Insights, I get a lot of in-bound questions and comments. Primarily from individuals within the industry, but also more regularly from individuals and groups on the edges and outside of '“upstream” agriculture.

One common question I get from this group is “What do you think of regenerative ag?”

Regenerative agriculture has been increasingly talked about, albeit this isn’t the first time it has been trending.

Looking at Google’s Ngram Viewer, we can see that it was frequently mentioned in books starting in the late 1970’s and peaking in the mid 80’s before gaining more mentions again in the early 2010’s:

We see the recent interest starting a bit later via Google Trends on a worldwide basis (Google search frequency):

It’s easy to understand why the interest has grown in the last 5 years: there is an ever increasing emphasis on environmental impact across all industries, including agriculture.

What got me thinking more on regenerative ag this week was this article:

SHOULD the term ‘regenerative agriculture’ be changed to encourage more growers to adopt the practices encompassed within the emerging industry?

“In the end, regenerative agriculture is quite a contentious term still,” Ms Loo said.

“It is getting more mainstream now… as we are moving into the early adopter phase.

“There are challenges in accepting that term.”

She said often the term implies that growers need to change their practices in order to consider themselves good land managers.

“I feel that our farmers, they love their land, and they are so connected to it.

“I think unfortunately we have talked about the narrative in the wrong way or a different way that challenges that value.

Re-naming something that is as a generalization poorly understood does very little to push any initiative forward in a productive way.

What is a better approach in my mind is to break down “regenerative ag” into its component parts and seek to better understand each of them and where a farmer can implement small changes by field or farm vs. wholesale telling farmers to “be regenerative” when what regenerative is a bundled system of practices.

Telling farmers to “become regenerative” is like telling a traditional hierarchal organization to become a holacracy over night - it’s likely a poorly understood term by most that is essentially a decentralized method of business management principles that requires a holistic understanding of the entirety of the business before it could be effectively implemented. Very difficult to do when a hierarchal approach is apart of the culture - just like farming and some of the regenerative practices.

So what exactly is “regenerative ag”?

It is defined as the below according to the Rodale Institute:

a system of farming principles and practices that seeks to rehabilitate and enhance the entire ecosystem of the farm by placing a heavy premium on soil health with attention also paid to water management, fertilizer use, and more. It is a method of farming that “improves the resources it uses, rather than destroying or depleting them

Essentially, it’s a bundle of practices, many of which are commonly practiced by “conventional” farmers already.

I’ll dive into them, but then the question arises: When does someone get to be considered “regenerative”? Is it doing 2 of the practices? 3? 4? How well do you have to do them? Does it matter?

What practices and principles actually make up “regenerative ag?”

There are generally 4-5 principles, depending on the source you want to reference. Here is one source, Climate Reality Project and another, Groundswell Ag. I opted to take their views along with other resources and recombine them together into the following:

For the most part, I can agree all of these can not only be a good thing for the environment and soil, but a good thing for yields and profitability of the farmer (caveat: they need to be implemented effectively).

When one looks at these, there are a lot of these that conventional farms already do, depending on geography.

Each of these layers can be put on a continuum with a scoring system in order to decipher Poor, Good and Excellent (1-3-5) across a field/farm to better assess (obviously this is all arbitrary and could be more precise, but for today’s purposes we will keep it simple):

Almost none of the above = 1

In this made up score card, 25 equates to a “perfectly regenerative farmer” and 5 essentially equals what I would say is a below average conventional farmer.

To assess this effectively is actually really nuanced as well, as we can see in bringing this score card to life below. I’ll break down a “conventional farmer” I used to work with when I was an agronomist in Saskatchewan, Canada who was considered an above average farmer in the area in terms of executing year to year and achieving high yields, but also would have been pretty typical in terms of practices used. Will use the fictitious name of Jack, but the assessment based on an actual farmer just with a different name.

What’s needed to consider here is the fact that in order to “move up” in score level for some of these segments require capital expenditure and a much more intense understanding of their operation and the level of support enabling it.

For example, if Jack wants to improve on crop diversity and implement intercropping there is a need (generally) to invest in sorting equipment. On top of this, he would need to do work to understand the best combinations (eg: maturity lines up for harvest or managed in some other way among many other things) of crops in his area along with other agronomic considerations like seeding rates, weed management, nutrition needs and more. In fact, something like seeding might require an extra pass with an RTK system to plant something like flax in between the rows of chickpeas. This would all have real economic implications for Jack on an annual basis meaning hesitancy to go down this route is justified in the short term even if there is economic and environmental upside long term.

It’s worth remembering, a broke farmer is unlikely to be a regenerative farmer. Some practices, like say fall seeded cover crops need to be assessed in the context of the most limiting factor to produce a profitable crop too: if rain is a significant constraint, a that might not be the place to start!

Personally, I am not sure it really matters (unless they have contracts in place for premiums, land management etc). Farmers should reap incrementally beneficial outcomes for their farm from each point progression along each continuum and they can tailor priorities to the agronomic needs or current economics realities of their operation. The goal shouldn’t be to appease a specific definition, it should be to optimize profits while having the least environmental impact. These principle practices allow for that while providing a guideline for those interested.

This is the benefit of breaking things down into their components: it changes the discussion from an “all or nothing” conversation to a “here’s a starting point and basic roadmap” which is much more palatable for everyone involved.

So what do I think of Regenerative Ag?

I think the components that make up regenerative agriculture bring a lot of value to North American farmers and beyond. The practices themselves each contribute tremendously to what the Soil Health Institute has deemed “healthy soil”; increasing soil organic carbon concentration, carbon mineralization potential, and increasing aggregate stability. In fact, farmers and most in the “conventional” industry already acknowledge this as we constantly see an emphasis towards better rotations, tillage management and diligence in using crop input products.

I also think the reason regenerative ag is “contentious” is because it’s poorly understood from a first principles perspective. Regenerative ag requires talking about the principle in practical, understandable terms, not marketing jargon. That is what will increase openness and adoption. It doesn’t require a re-naming, it requires groups attempting to shove the bundle of practices in every place to better consider where specific practices can benefit farmers and for those groups to emphasize the positive implications in ways that resonate with farmers, not what resonates with ESG investors.

Overall, the adoption of these practices has implications for the entire industry too. As we see more of these practices adopted it reinforces that we are likely to see growth in interesting areas of agriculture, including the biological space whether for increasing nutrient management, as an ancillary crop protection mechanism and even to aid in tillage management through “trash digesters”. It also means we may need more work done on some challenging areas, like intercropping. This could mean explicit scientific research, or it could be an opportunity for ambitious companies and agronomists to plant their flag and become the go-to experts in this space, like Scott Gillespie has done.

Whether regenerative ag continues to be a term talked about, or some other terms takes (eg: “biodynamic agriculture” or “climate smart agriculture”) its place, it’s useful to break down and understand not just the definition, but the principles that go into that definition.

It’s easy to emphasize the need to move away from synthetic crop protection products as a need to fit into the “regenerative” bucket. I think frequently of this data from Phillips McDougall that is good context on the progress that has been made: 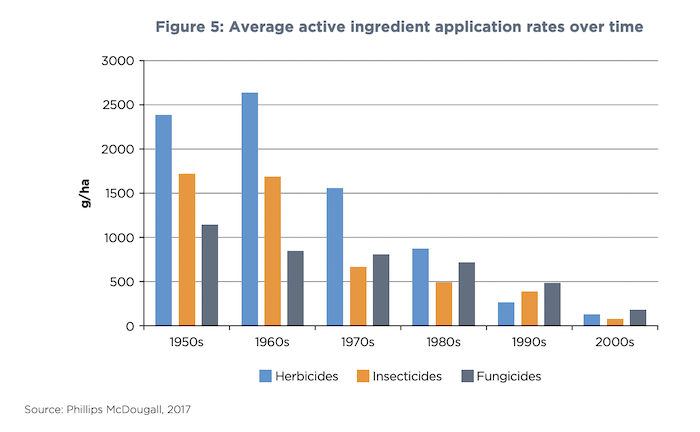 Average application rates in the 1950s were 1,200, 1,700, and 2,400 grams of active ingredient used per hectare for fungicides, insecticides, and herbicides respectively. By the 2000s the average use rates were reduced to 100, 40, and 75 g/ha. This technology evolution means the amount of active ingredient used by a farmer today is around 95% lower than the rate used in the 1950s.

The decline is palpable.

(Note: using corn as the default standard, obviously it will vary by crop)

Yields have nearly tripled on average, while crop protection usage as grams per hectare have reduced by 95%!

Not to mention, the relative safety of the active ingredients used has improved as well: 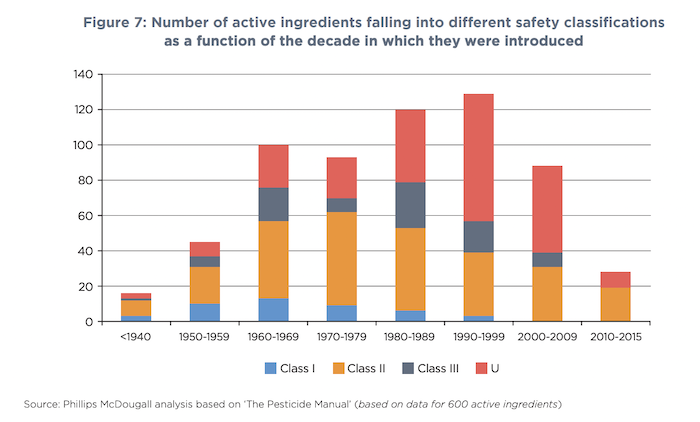 There will always be room to improve when it comes to environmental safety and crop protection products, but the improvements over the last ~60 years are impressive. This is likely to continue to increase with precision agriculture adoption and moves towards alternative ingredients to manage pests. Digging Into the Principles of Regenerative Ag

NextGen|ReGen Campaign Seeks to Grow Next Generation of Regenerative Farmers