If you're looking for help from the weather this year after planting, you might get it depending on your fields.

NOAA released their seasonal predictions for temperatures and precipitation through the bulk of the growing season on May 19.

The weather agency characterizes both scenarios as "Leaning Below" normal precipitation.

A narrow funnel-shaped alley from Minnesota to Maine, and south to the Gulf, will likely face normal precipitation rates from June to August.

The agency characterizes both scenarios as "Leaning Above" normal precipitation. 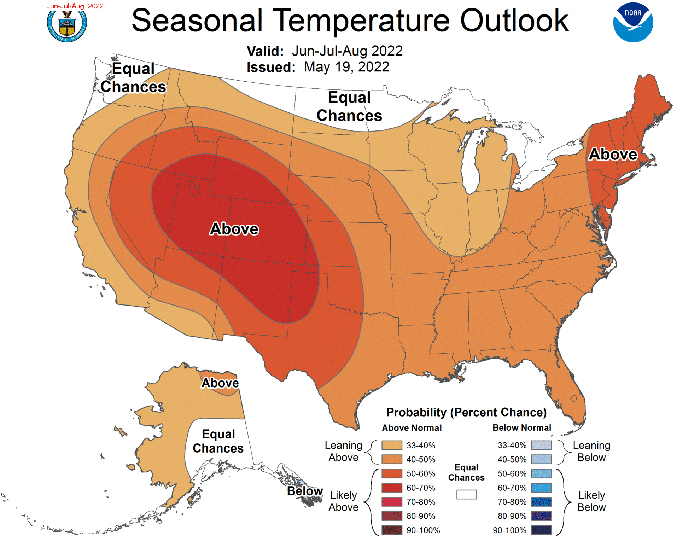 NOAA's seasonal temperature outlook for the climate during the June-July-August portion of the growing season, released May 19. Source: NOAA.


On the temperature side, almost all of the lower 48 are "Leaning Above." A kidney-bean-shaped region stretching roughly from Southern Idaho to Northern Texas is predicted to face temperatures "Likely Above," with a 50-60% chance of above-average temperatures.

This might explain why, out west, academics and officials are talking about drought conditions, while in the Midwest and East, rainfall and flooding has dominated the discussion and forced planting delays.

The next three-month outlook, covering the tail end of the growing season and the beginning of harvest — depending on crop — will be released in June.

Low precipitation is likely to make things more frantic this year, amid input prices and equipment delays. It always helps to keep one eye on the weather.

NOAA: Drought In Plains Will Persist This Spring