NOAA: Drought In Plains Will Persist This Spring 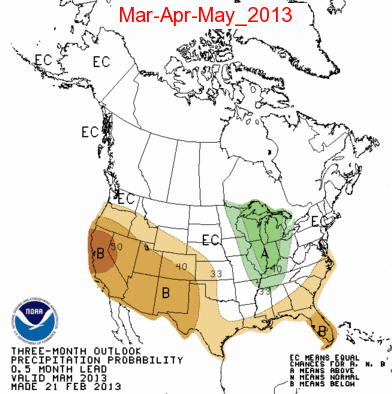 The latest NOAA drought outlook predicts that dry weather is expected to persist and even expand in parts of the central U.S., while some improvement is expected further east in the Corn Belt.

Drought is expected to improve at least somewhat across the northern half of the Mississippi Valley and the western Great Lakes region. Specifically, some improvement is forecast across most of Missouri and the central and western sections of Iowa and Minnesota, with more marked improvement anticipated farther east.

Forecast confidence in the Mississippi Valley and western Great Lakes is moderate.

Drought is expected to persist and expand across the southern half of the Plains, all but the northern tier of the Rockies, the Intermountain West, and the Far West. This includes those parts of the broad extreme to exceptional drought area that lie south and west of Nebraska, where forecasts on most time scales favor below-median precipitation.

Areas from Nebraska to the north and northwest can expect limited improvement. Moderate to heavy precipitation for this time of year is expected in Nebraska and surrounding areas on top of the significant precipitation observed recently. Some improvement was forecast farther north and northwest - in much of the Dakotas and in some areas near the Montana/Wyoming border - for one or more of the following reasons: Moisture deficits of shorter duration and/or smaller magnitude than farther south; near-normal precipitation since the start of the water year (Oct. 1, 2012); near-average mountain snowpack; an unremarkable Surface Water Supply Index (SWSI); and/or near-normal summer streamflow forecasts. All of these factors make it easier to mitigate impacts.

However, the majority of the large area of drought can expect conditions to persist, with no lasting, tangible improvement anticipated at least through the end of May. Even in the central Plains, normals are fairly low until May, and any significant, long-standing improvement is unlikely before then. Drought is expected to expand into most areas not currently in drought along the southern tier of the country from central Texas through southwestern California.

Also,  drought is expected to expand significantly across central and northern California and adjacent Oregon. The forecast expansion in the west-central Pacific Coast was motivated by a markedly dry February and forecasts for continued below-median precipitation on most time scales ranging from 5 days to 3 months. The 3-month precipitation outlook for northern and central California indicates chances exceeding 50 percent that spring precipitation totals will rank among the lower one-third of historic occurrences.

The one significant wild card through the Plains and adjacent Rockies is May - a wet month with sizeable precipitation normals as mentioned already. Moisture deficits could rise or fall quickly once the month gets underway if precipitation is significantly above or below normal.

For the large area of drought from the Plains westward to the Pacific Coast, forecast confidence is moderate to high, with less certainty along northern and eastern parts of the region, where the monthly and 3-month outlooks do not favor drier than normal conditions as they do elsewhere.

Across the interior Southeast, north of the Florida Peninsula, heavy rains have fallen since late February, with 10 to 20 inches reported in a stripe across the western Florida Panhandle and much of central and southern Georgia. The March - May 2013 precipitation outlook favors below normal precipitation in this same area while the updated March outlook is non-committal. Drought improvement is forecast because of the magnitude of the rainfall already observed and because relative confidence in the long-term outlooks is inherently relatively low. Still, marked dryness during the last half of the period could counteract recent rains, and this seems quite possible (though not likely) in light of the dry 3-month precipitation outlook.

Forecast confidence in the interior Southeast is moderate.

Farther south, the heaviest rains missed the Florida Peninsula. The three-month precipitation outlook favors below-median precipitation as it does farther north, but with higher probabilities. Shorter-term, below-median rainfall is expected, and this is a dry time of year there - only 15 to 20 percent of annual rainfall is recorded during March - May typically. This all implies continued surface moisture depletion, and the ongoing short-term drought should persist and expand through the end of May, with drought anticipated along the entire Peninsula by then. Forecast confidence along the Florida Peninsula is high.

Tools used in the U.S. Drought Outlook (USDO) included the official CPC temperature and precipitation outlooks for March 2013 and March through May 2013 (released Feb. 21), various short- and medium-range forecasts and models such as the 5-day and experimental 7-day HPC precipitation totals (released Feb. 20), 6-10 day and 8-14 day forecasts (released Feb. 20), the NAEFS precipitation outlooks, the soil moisture tools based on the Constructed Analog on Soil (CAS) moisture, dynamical models (CFSv2, NMME, and IMME), the 384-hour total precipitation forecasts from several runs of the GFS, the four-month Palmer drought termination and amelioration probabilities, climatology, and initial conditions. We are currently in ENSO Neutral conditions as of this forecast release date.

Preparing for Planting Winter Wheat in Land Not Planted this Spring

Will Corn And Soybean Prices Return To Pre-Drought Levels?