Preparing for Planting Winter Wheat in Land Not Planted this Spring

Impact of winter kill on selected varieties of winter wheat in a replicated trial at Carrington. The border row on the left was WB Matlock, and on the plot on the right was Jerry. Many varieties had few plants surviving. (Photo Courtesy of NDSU Extension)

Planting winter wheat is probably not a priority right now. However, for those that had prevented plant acres that are considering establishing a residue crop, now is the time to act. There are a number of reasons why growing winter wheat can be a good choice particularly for land not planted this spring.

However, as the past few winters have shown, winter injury can be a serious constraint to its production. Management practices this season that enhance the winter survival of winter wheat can pay big dividends next year. The following are practices to consider when establishing a winter wheat crop in prevent-plant acres.

The survival of winter wheat throughout winter is enhanced when it is planted into fields that catch and retain snow. Fields that still have standing stubble are ideal for direct seeded winter wheat. For fields that were previously tilled or that have little or no stubble, establishing an effective residue crop can significantly improve the probability that there will be adequate snow cover.

To be effective, a residue crop must remain erect during the fall and winter.  The most effective residue crop is flax. Flax can be established as a lightly seeded solid stand, in wide rows (i.e. 3-4 feet spacing) or as strips. Strips of flax 3 to 5 feet wide and 15 feet apart have been found to effectively trap snow while minimally depleting soil moisture. 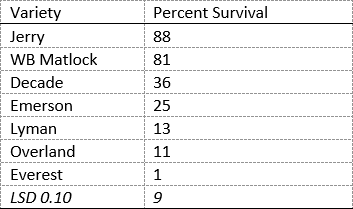 Effect of variety on winter survival of selected winter wheat varieties in Carrington, from 2014.

When seeding flax in strips or in wide row spacing, the drill should be set at a high seeding rate (40 pounds per acre) and drill spouts should be taped shut to obtain the desired spacing.  Strips of flax more than 20 feet apart can be risky as they do not catch sufficient snow in most years.

Flax should be seeded in mid- to late July or early August, depending on the region of the state. Though some additional weed management will be needed prior to planting, flax planted between mid-July and early August followed by winter wheat could be a viable and profitable option for dealing with land that was too wet to plant this spring.

Secondly, make sure that you plant the most winter hardy varieties, especially if you are not planting into an erect residue. The most recent winter wheat variety selection guide can help you identify the relative winter-hardiness of currently available varieties. The following table and photo illustrate the large difference that we observed in winter survival of a few varieties planted in Carrington in a legume residue (very little if any standing stubble) this past year.

Based on previous results, I would not have expected the very large difference between Jerry and Decade and Emerson, as previous ratings suggest that they have relatively good winter hardiness.