With a soil armor of residue, better water infiltration and diverse crops, Alan Mindemann is making no-till work in the most challenging of conditions.

Go to www.no-tillfarmer.com/mindemanngrazing to see how Mindemann is welcoming back commercial cows to his farm with some added help.

Alan Mindemann’s thirst for knowledge started at an early age. He was given a subscription to National Geographic when he was 6 years old, and his father always had lots of farm magazines around.

One day he read something about an Allis-Chalmers no-till planter. “I saw that and I thought, ‘You don’t have to plow,’” he recalls. “And I took it over to my Dad and said, ‘Can we do this?’ and he said, ‘Oh, it won’t work here.’ And I did that for the next 30 years, thinking it would never work.

“Then I got my chance to prove it works, and it does work really well — even in our area country, where it’s not the best farming country in the world.”

Mindemann farms near Apache in southwestern Oklahoma, an area that is susceptible to erratic weather patterns — especially in the last 10 years, he says. Average yearly rainfall is about 32 inches, but can range anywhere from 16-50 inches in just a year or two. So far this month, he’s seen 7 inches of rain, whereas August tends to be scorching hot and dry.

Pan evaporation averages about 60 inches a year and can easily go up to 100 inches during major drought periods, such as the one that occurred in 2011. 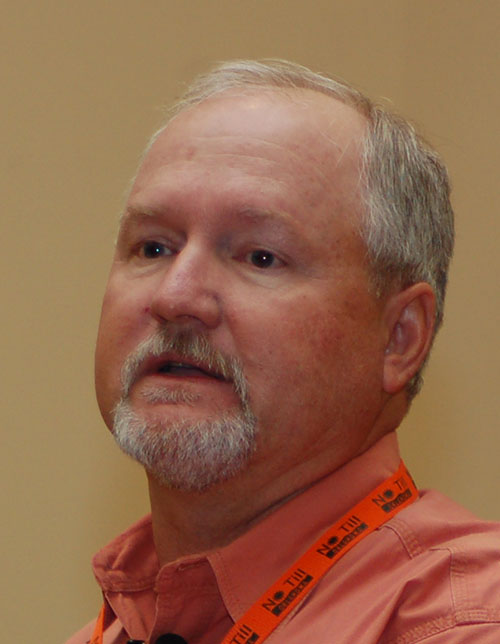 “We need those plants shaded and out of the wind, or they’re just not going to make it… And we’ve got to preserve all the moisture that we get…”

With plenty of frost-free days, Mindemann’s growing season is long enough that he can easily grow two crops a year, and nearly everything can be planted early or late. Despite that, he typically doesn’t have a set crop rotation, as precipitation and soil moisture often dictates what he can raise. He farms about 3,000 acres and plants 5,000 acres annually.

Cover crops and forage crops can be raised just about the entire year, and he also raises non-GMO soybeans and mung beans for seed. While this might seem like a scattershot approach, Mindemann notes that when he started farming 20 years ago it was tough competing against established growers, so he’d plant specialty crops other farmers wouldn’t bother with.

“I got the reputation of being able to grow about anything. I’ll try anything,” he says.

Mindemann estimates 80-90% of the farmers in his area are raising a winter wheat monoculture and livestock in conventional-tillage systems, leaving many fields in bad shape with very little soil organic matter and low pH levels.

He says low pH, in the high 4s sometimes, is almost an epidemic in his area. Mindemann purchased his own application rig to do variable-rate applications of lime and gypsum based on recommendations from zone sampling.

When asked how long it takes to build soils up with no-till practices, diverse rotations and cover crops, Mindemann says it depends on the starting point. Some fields he’s rented have had massive amounts of tillage in terrain that can’t support it, leaving hillsides as sand rock as the soil eroded to the bottom.

“When I was growing up, the farmers who were considered good at the time now have land that is absolutely the worst,” he says. “The poor farmers who went out, let their fields grow up in weeds and disc it 2 inches deep and plant their wheat — their fields are the best now, health-wise. Because back then, the good farmers were judged by how deep and how often they worked the ground.

“I’ve had a couple of those poorer fields for 6, 8 years and they’re better than they were, but still aren’t very good,” he adds. “I tell my landlords, ‘I have to have a long-term lease because I’m going to build these farms up to where I can make some money at it. I’ve got to get my money back somewhere down the line. But when I’m gone, you’ll have a good farm.’”

But on his own no-till operation, soil organic matter has increased by about 0.10% each year on most farms, with some of them reaching 2.5% after starting at 1% or less. 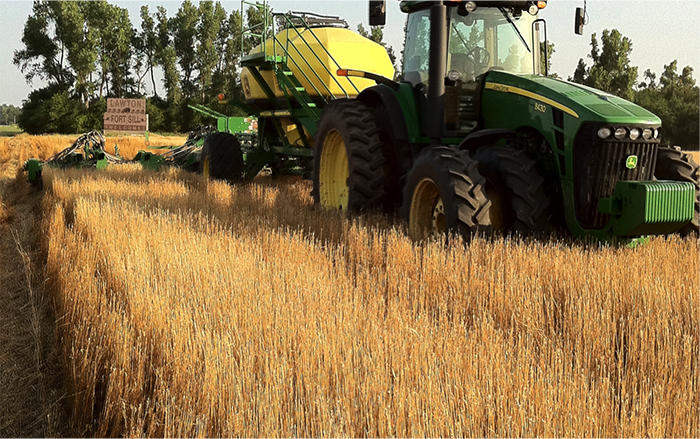 Apache, Okla., no-tiller Alan Mindemann double-crops mung beans after small grains in summer and has had good success, noting the crop grows quickly and yields well with timely rains but still provides something if it’s dry.

Mindemann says there’s no way he could be raising so many crops if he didn’t have no-till residue to shade plants from the elements.

Mindemann uses a Shelbourne Reynolds stripper head to harvest small grains and keep residue standing, which he says is critical to protecting his summer crops, planted form mid-June to Aug. 1. He drills crops directly into the standing wheat stubble as well, unless it’s canola, as that crop tends to favor less residue in its environment.

“We need those plants shaded and out of the wind, or they’re just not going to make it. And we’ve got to preserve all the moisture that we get,” he says. “When it rains, we need to catch it all because we never know when a rain might be our last one.

“My objective, on all these crops, is to keep them vegetative through August, the hot part of our year, and turn them reproductive in September when we start cooling off and actually getting some rains. And over the last 20 years that I’ve been doing this, it’s been a really successful plan.”

One example of Mindemann’s adaptations to weather challenges is with corn. Conventional wisdom in Mindemann’s area is that corn just can’t be grown, but he’s had success planting corn into killed bermudagrass, taking yields as high as 150 to 200 bushels an acre on some farms during favorable conditions.

“The trick to growing good corn in southwest Oklahoma on dryland is picking the right year to plant it,” he says. “We don’t rely on it for a crop every year.”

Mindemann raised non-GMO double-cropped soybeans after winter wheat in 2016 that yielded an average of about 40 bushels an acre, but some field areas hit 60-70 bushels. Typical yields in his county for dryland soybeans are about 8 bushels and 42 bushels for corn.

“So we get lucky once in a while. We plant low populations on corn and I only plant corn in a year that I think we might get some rain,” he say s. “And if it’s dry in the spring, we don’t plant corn. We just take advantage of the opportunities that present themselves to us.”

Mindemann also started seeding cover crops in 2005 as a means of keeping the ground covered so available soil moisture won’t evaporate and soil temperatures are kept at reasonable levels.