“Nothing motivates me quite like being told I can’t do something. They told me no-till doesn’t work here, and you’re not supposed to be able to grow any type of canola. Well, look around. Here we are.”

When Douglas Poole speaks, you can hear the passion in his voice for healthy soil and how it has helped his farm. Poole wasn’t always a soil health proponent; he used to be an accountant.

Poole is a dryland farmer of winter wheat in Mansfield, one of the driest parts of Washington State. The area receives seven to nine inches of rain per year, and with so little water, Poole needed to find a system more efficient than conventional farming for his crops to flourish.  He decided no-till was the way to go.

“In the beginning, it was more of an opportunity to see if I could save labor, overhead and everything else. The more I researched it, the more I saw that it wasn’t so much no-till as it was soil. That was really the driver,” said Poole.

But support for no-till in Poole’s community was lacking.

To get started with no-till and other soil health practices, Poole went to USDA’s Natural Resources Conservation Service (NRCS). In 2012, he was awarded one of the first Energy Initiative contracts through NRCS’ Environmental Quality Incentives Program (EQIP). This contract allowed him to partially convert his operation to no-till, implement cover crops and crop rotations. He was able to convert the remainder of his farm to no-till practices through the EQIP Air Quality Initiative in 2015.

Poole has implemented no-till practices, and now has crop rotations including canola, sunflowers and spring crops. 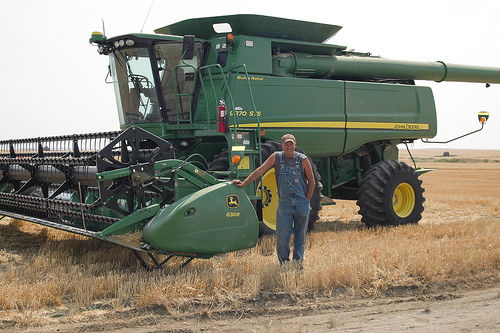 Douglas Poole is an evangelist who saved his own soil. Now he wants to help others save theirs.

However, it’s still a conservation practice combination that many conventional growers are hesitant to try, especially in 10-inch precipitation zones.

Poole’s soil health approach isn’t faith-based. He’s constantly researching soil health practices that improve his soil, and he has participated in several cover crop studies with his local conservation district, as well as some of his own.

Poole recently decided to let his last cover crop grow throughout the year, rather than terminating it.

“We found that if we could have that diversity of root growth in soil, we could actually gain moisture. Almost like we are farming moisture. And obviously, that enhances the soil.”

In the future, Poole’s vision is for his land to be completely covered at all times. Currently his land is roughly two-thirds of that. He plans to have no fallow land within ten years.

“I can’t even imagine being a conventional farmer and looking to the future. I feel like those of us that have made the conversion have a future.”

He’s an evangelist who saved his own soil. Now he wants to help others save others’.

To learn about the Environmental Quality Incentives Program and how NRCS can help you install conservation practices on your land, including information on soil health and conservation assistance, contact your local USDA service center or learn how to get started with NRCS online.

How Long Can Canola Seed Sit in Dry, Dusty Soil?