Oct. 24, 2013 — The University of Arkansas has been receiving numerous phone calls about Dectes stem borer in soybean this year.

For those unfamiliar with Dectes texanus, it is a native species and there are one to two generations of this pest for this year. The adult is a buff gray colored beetle (Fig. 1) of the cerambycid family of beetles, which are commonly referred to as longhorned borers because their antennae are often longer than the body, as in the case of Dectes.

The larva, which is the stage that damages soybeans, is an off-white color and is usually found in petioles or the main stem of the soybean plant usually in the months of July through September (Fig 2 and 3).

Dectes is found all thru the Mid-South, the Eastern Seaboard and the Midwest. Its host range includes cocklebur, giant ragweed and sunflower (preferred host). Most of the literature on this pest indicates that it is not a major pest and that damage is usually isolated to field edges and ditch banks where wild hosts are found.

It states in the ESA Soybean Insect Handbook that the importance of the pest may increase with increased no-till acreages. Certainly in recent years with the advent of Roundup Ready soybeans and increasing reduced and no-till acreage, it appears that the occurrence of this pest has increased significantly.

In recent years we have observed an extremely high larval population, where parts of the field were exhibiting symptomology associated with high infestation levels. Upon closer examination of these lighter colored areas, we observed leaf petioles dying as a result of larval tunneling. Many of the leaf petioles were dying from infestation, and upon removing them we could see where the larva had entered the main stem (Fig. 4) and had begun to bore in the main stem (Fig. 5). 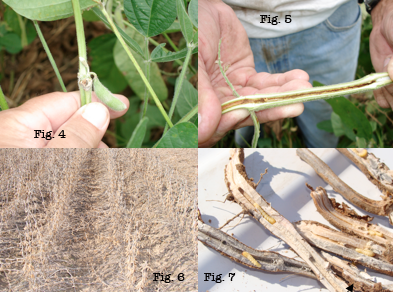 According to the literature, adults lay their eggs in the upper petioles of the plant in July and August — this year, I think it may have begun in mid- to late June. The larvae then begin to feed on the petiole and move quickly into the main stem. The damage shown in Figures 4 and 5 shows the damage to the leaf and petiole resulting in the petioles and leaves dying.

The trifoliate and damaged petiole where the small larva is tunneling in the petiole will cause the leaf to wilt, turn chlorotic, and it will eventually cause the petiole to drop from the plant.

Obviously this could easily be misdiagnosed as a disease or nutrient imbalance. Once the larva hits the main stem, it will tunnel up or down the main stem. As the larva develops it will eventually move down the main stem and girdle the inside of the plant 2 to 3 inches above the soil. This can result in lodging (Fig. 6) during high winds or heavy rain. Examination of lodged plants shows the larvae in the stubble of broken and lodged plants (Fig. 7).

This year I suspect the above average pod load is also increasing the lodging. Also, when the field is harvested, these girdled plants often break over and don’t make it into the header of the combine. We have documented as much as 25% to 30% yield loss in fields with severe infestations.

Literature sources and work we have done here in Arkansas, as well as Tennessee, Missouri, Kentucky and Kansas, indicate no impact by main stem tunneling. However, all the literature agrees that the yield loss does occur from lodging. Damage caused by adults is not a concern and is limited to light foliage feeding.

The female is reported to produce about 50 eggs. The great majority of these eggs are laid on the petioles. However, they can be laid on the main stem or other stems. Larvae overwinter in the soybean stem below the girdle they cause. They will pack the top of the tunnel at the girdle with a frass plug. The larvae pupate in May to July and adults will begin to emerge from June to September. They emerge from the stem by chewing their way out of the stem below the plug they formed below the girdle. Adults will mate within 5 days of emergence. There is a preovipositional period lasting 10 to 14 days. Males will survive 2 to 3 weeks and females 4 to 8 weeks.

Currently, the only recommendation for reducing populations is by tillage and burial of infested stubble to a depth of 2 inches or more. Crop rotation might reduce numbers, as it appears the worst infested fields are those that are in a monoculture of soybeans. However, as these are mobile insects, effectiveness of crop rotation could be reduced depending on surrounding fields and wild hosts in the area.

What the Grower Should Know About Dectes Stem Borer

Look Out For Green Stem Syndrome In Soybeans