Controlling Sunflower Stem Borer May Not Include Use of Insecticides

The ever increasing pest in sunflowers, the sunflower stem borer — also called the soybean stem borer — is causing more damage and harvest loss to fields across sunflower producing areas. Many times you’re not aware that you have a problem until you see plants lodging before harvest.

Sometimes the damage may be confused with the sunflower stem weevil. However the weevil will have multiple larvae per stem and the larvae will be smaller in size and C-shaped.

Both cause damage to the stalk of the plant as they feed on the pith.  When weevil levels are high enough to weaken the stalk, they will lodge, due to increased stalk rot. The damage of a stem borer is done from a single larvae feeding down the stalk and girdling the plant near the soil surface.

Adult stem borer emerge in June and early July and may continue emerging through August.  Adults lay eggs on leaf petioles and eggs hatch in six to ten days with larvae tunneling into stalk. They will feed in the pith and finally move to the base of the plant to overwinter. When the larvae mature, they will then move up to girdle the plant above soil surface to form a plug for their overwintering chamber, therefore causing plants to break over and lodge. 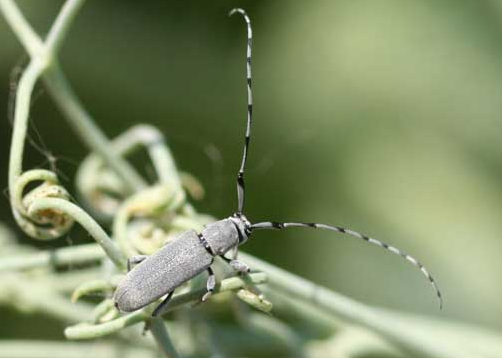 Photo of a sunflower stem borer. In many situations, the best way to deal with this pest is awareness of infestation levels, as well as considering desiccation of the sunflower plant at proper seed moisture to speed up harvest, says CropQuest’s Grant Havel.

Insecticide treatments on sunflowers are ineffective against the larvae since they reside within the stalks. Treatments for the adults are variable since they have a long emergence period.  And many products that are available aren’t effective for control, since residual is too short to cover the period of emergence.

So in many situations, the best way to deal with this pest is awareness of infestation levels, as well as considering desiccation of the sunflower plant at proper seed moisture to speed up harvest. This will allow you to harvest sooner and minimize the amount of lodging that will occur.

The desiccation products that would be used will in many cases be cheaper than applying insecticide multiple times. Later planting will help to limit some damage. When planting adjacent to fields with standing sunflower stalks that had high infestations of borer the year before, a fall or winter tillage of the sunflower residue will help, as well.

You can also look at planting thinner populations to increase the girth of the stalks to better withstand the girdling of the stalks.

There are perennial sunflower species that are resistant to stalk borer, which may lead to some new sunflower varieties with some resistance in the future. Until then, scouting is best method to determine the amount of lodging that could occur before harvest.  Based on the level of infestation, there should be time to plan accordingly.