Many soybean growers have had problems with lodging at harvest this year. The primary culprit for this (as for many of our woes this fall) was the extended period of unfavorable weather that we have suffered. However, in parts of southern Illinois damage by the dectes stem borer contributed to this problem.

The adult dectes stem borer (Figure 1) is a “long-horned” beetle that can often be found in soybean and on other plants. The adult female chews a hole into the surface of the plant (usually at the petiole), and lays her eggs in the pith. This often results in individual petioles wilting or falling completely off of the plant, which is usually the first sign of an infestation. Upon hatching, the larva (Figure 2) tunnels throughout the stem and feeds on the pith.

As the plant nears maturity, the larva moves into the base of the stem where it will spend the winter. As awful as the bored-out stem of a soybean plant looks after being attacked by dectes stem borer, economic losses only occur if this damage leads to lodging.

When preparing to overwinter, larvae will often girdle the base of the stem, causing the plant to break off and leading to harvest difficulties and reduced yield. This insect has one generation per year, with the adults usually emerging from soybean residue beginning in late June in Illinois to start the cycle again. 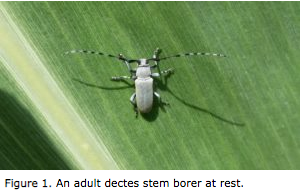 Insecticides are generally not recommended for control because the larvae are protected within the stem and the adults lay eggs over a long period of time in the summer (approximately mid-July through August in Illinois).

While there appear to be some differences in varietal susceptibility, these differences are not well documented, and to my knowledge no soybean varieties have been characterized as resistant to dectes stem borer. However, there are some cultural management options available to producers:

Controlling Sunflower Stem Borer May Not Include Use of Insecticides