More Peril for the Ogallala Aquifer

By John Dobberstein posted on August 26, 2015 | Posted in Water Management

More bad news emerged this week for the beleaguered Ogallala Aquifer, as a University of Nebraska research team found uranium contamination was present in wells throughout the aquifer’s footprint in Great Plains.

Contamination was also found in the agriculture-rich Central Valley aquifer in California. The research included sampling 275,000 groundwater sources in both aquifers, and natural uranium was found to be the contaminant.

Karrie Weber, assistant professor of biological sciences and earth sciences at the University of Nebraska, led the research and says nitrates were likely leading to the breakdown of naturally occurring uranium.

Since uranium is a toxic heavy metal, there are health risks associated with consuming it above levels recommended by the EPA. Uranium above 30 micrograms per liter has been linked to kidney toxicity and bone toxicity, and some studies have indicated an increased risk of cancer.

Weber says the nitrates linked to the uranium may be coming from fertilizers, animal waste or industrial waste, and that farmers who draw water from the Ogallala aquifer should keep a close eye on what’s in the soil and irrigation. 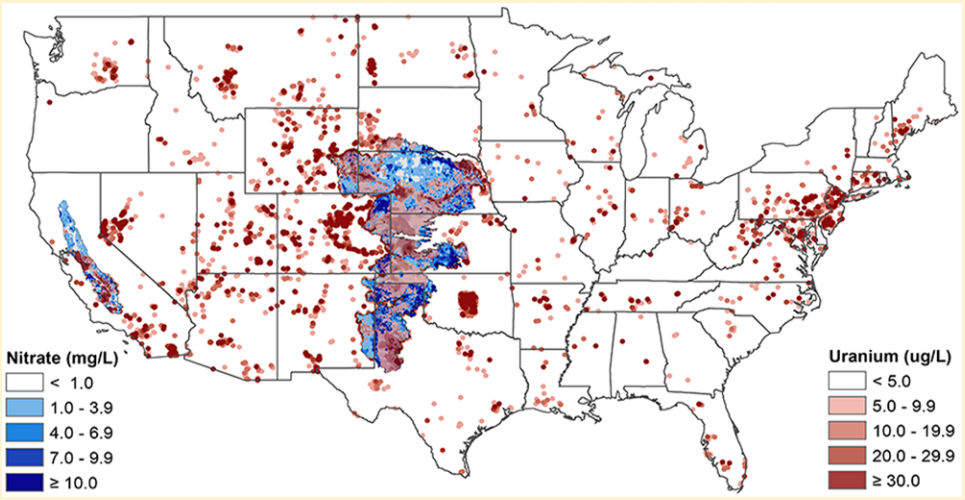 David Weindorf, who researches soil science at Texas Tech University, told the Lubbock TV station KAMC that he doesn’t feel there’s an imminent threat to the public, but when drilling a new well, the water should be tested to make sure the water quality is acceptable. The water should also be tested once or twice a year to make sure there are no increasing levels, he says.

Windorf’s colleague at Texas Tech, Sanjit Deb, told KAMC that the uranium present in the field after irrigation will eventually will be taken up by plants, leaving to question how this affects the food chain.

This is no small issue, given that these two aquifers combined provide water for one-sixth of U.S. agricultural output by value. The Ogallala, or High Plains Aquifer, covers some 174,000 square miles in parts of South Dakota, Nebraska, Wyoming, Colorado, Kansas, Oklahoma, New Mexico and Texas.

While the imminent threat to the majority of the public due to this contamination seems to be debatable, I don’t have to remind you that we’re farming in a culture today where there is heightened consumer awareness of issues surrounding food production, and sometimes perception gets far ahead of reality.

Yes, it’s just another reason to point the finger at farmers. But it’s probably best, even if you’re skeptical of the threat, to get the best handle you can on how nitrates might be leaving your farm, and to test your irrigation water.

In addition the effect of uranium on crops, I’m curious about how the presence of uranium might affect soil biological activity — if it does at all — or nutrient availability.

I’ve reached out to Weber and a few other industry experts, but anyone has insight on this, they’re free to contact me.

Bright Spot for the Ogallala Aquifer