A variety of tillage practices have been used since the beginning of agriculture. Proper tillage warms and dries the soil, kills weeds, incorporates fertilizers, and breaks up compacted layers. On the down side, tillage breaks apart soil aggregates, creating smaller-sized particles that leads to soil erosion, crusting of the soil surface, hard pans, water quality issues, and over time, a decrease in soil organic matter.

One hundred years ago, there were few choices of tillage tools. However, in the past 25 years, there has been an upsurge in the configurations of shanks, disks, and shovels that till the soil at different depths and aggressiveness levels. These new tools impact soil warming and drying and may ultimately affect crop yield.

Less tillage on cropland allows the soil to take in more intense rainfall before runoff begins, thereby reducing soil loss. Advantages to the crop producer include:

However, concern about yield reductions due to cool and wet soil conditions may limit adoption of reduced-tillage systems for corn-soybean rotations on the poorly-drained soils that dominate much of western Minnesota and North Dakota.

In 2014, studies on two farms near Barney, ND and Fergus Falls, MN, and a third in 2015 near Mooreton, ND were established. These farms ranged in soil series with sandy, loamy, and clayey textures, providing local farmers with a realistic picture of low-tillage impacts on their own acreage. Full scale equipment was used in farmers’ fields. 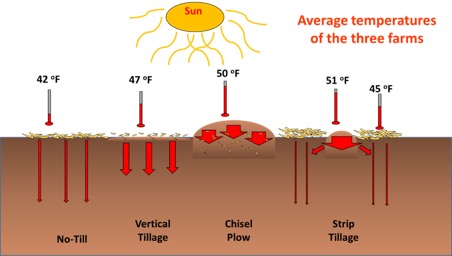 Differences due to soil types 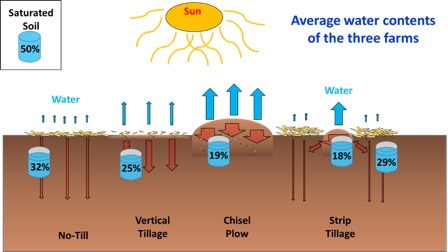 As the surface of these clay soils dry, it is likely that moisture is more readily replaced by the capillary rise of deeper water than what would occur in the sandy soils.

The trends in soil moisture and temperatures did not cause any differences in soybean or corn plant populations, growth, or yields. Soybean yield was not affected by tillage at any of the farms during the four growing seasons, except on the farm with sandy soils near Barney in 2018 (Table 1). At that farm, both strip tills - with shanks or coulters - yielded 3.7 bushels per acre more on average than the chisel plowing and shallow vertical till.

Yield difference trends were observed in corn in some years, but these differences were not consistent year-to-year, farm-to-farm, or among the tillage practices. Instead, benefits or consequences to corn yields were explained by whether timely fertilizer application and placement was done or whether soil conditions were too wet for proper tillage operations.

This data from this research shows that crop producers can do less tillage, leave more residue on the soil surface, while maintaining their yields.

Table 1. Impact of tillage on yield. Corn and soybean yields at two locations over four years, 2015 - 2018. Note: Yields followed by the same letter at the same location in the same year are not significantly different.

Dicamba and Temperature Inversions: Lessons Learned from 4 Years of Research