We have received a few questions this winter and spring about ammonium sulfate (AMS) rates to use with postemergence herbicides and how much is needed to overcome hard water issues.  Because of lower commodity prices and grower interest in keeping input expenses as low as possible, I thought it would be a good time to review this topic and the AMS equation to help applicators and farmers plan for spring and summer herbicide applications.

First, we would like to review the reasons for using ammonium sulfate with postemergence herbicide treatments.  It is fairly well-known that the weed control efficacy of many weak acid herbicides like glyphosate, 2,4-D, clethodim (Select and others), glufosinate (Liberty and others) can be reduced when water sources contain hard water cations like calcium (Ca+2), iron (Fe+3), magnesium (Mg+2), and sodium (Na+).  The hard water cations, which have a positive charge, will bind to the negatively charged herbicide molecule and reduce the herbicide’s ability to be absorbed into the plant.  Sometimes we call this process chelating and it is well known that glyphosate can chelate Ca2+ ions, and that calcium can tie up multiple glyphosate molecules (Figure 1). 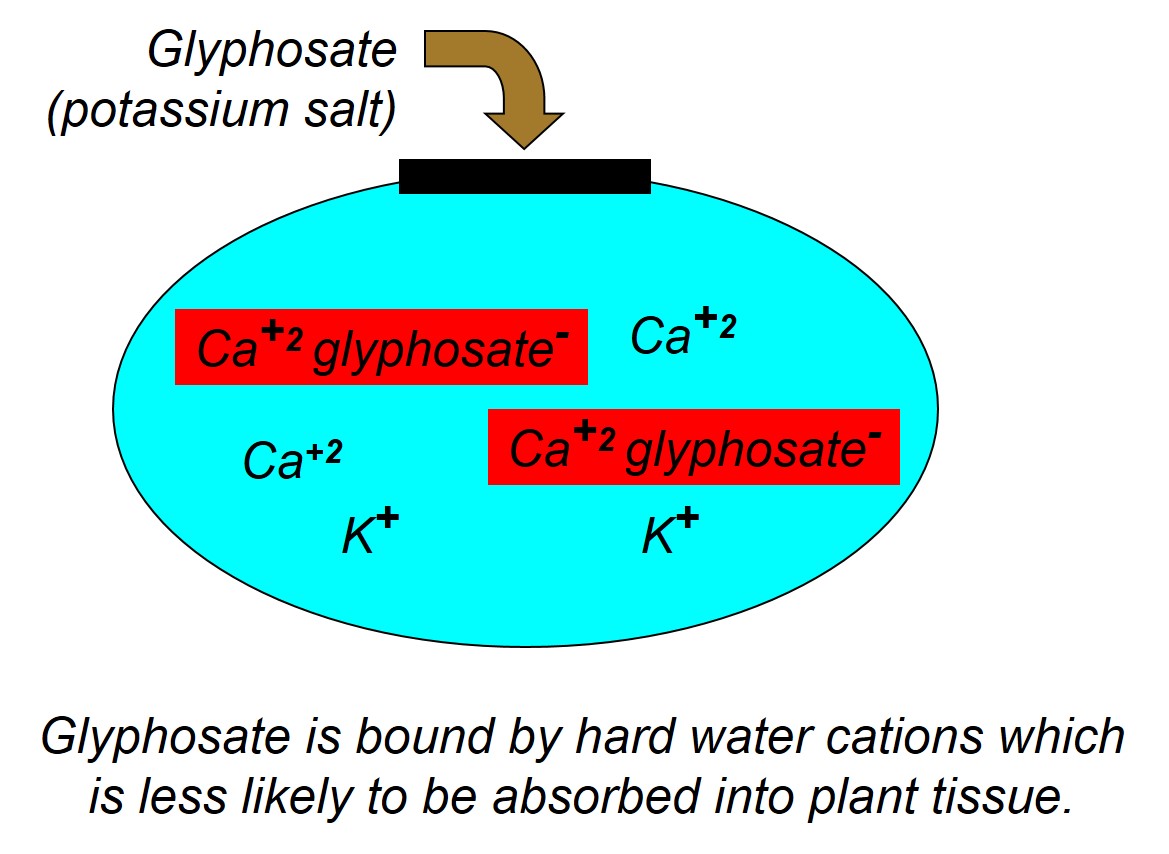 To correct this problem, when you add AMS (NH4)2SO4 to the tank, the ammonium (NH4+) disassociates from the sulfate (SO4-2) and the sulfate preferentially binds to the positively charged hard water cations.  The sulfate essentially sequesters the hard water cations and prevents them from binding to the herbicide(Figures 2 and 3). 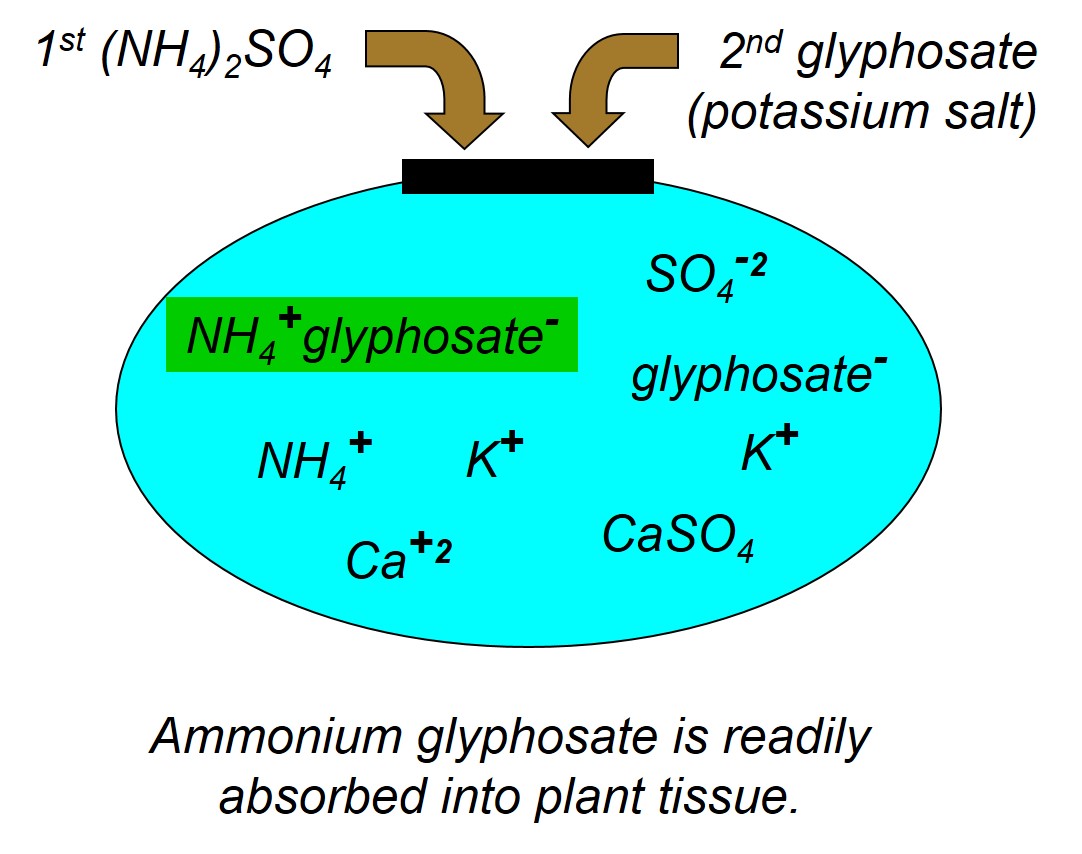 Additionally, after antagonistic minerals are neutralized by the sulfate, the ammonium can bind with the herbicide to form the ammonium herbicide salt, which can more effectively pass through the plant cuticle resulting in greater herbicide absorption, in some cases increased herbicide translocation, and overall greater herbicide efficacy.  This ‘physiological’ effect of AMS enhancing foliar herbicide activity even in the absence of hard water is important to keep in mind when considering adjuvant products that contain less ammonium, yet claim to be a replacement for AMS. 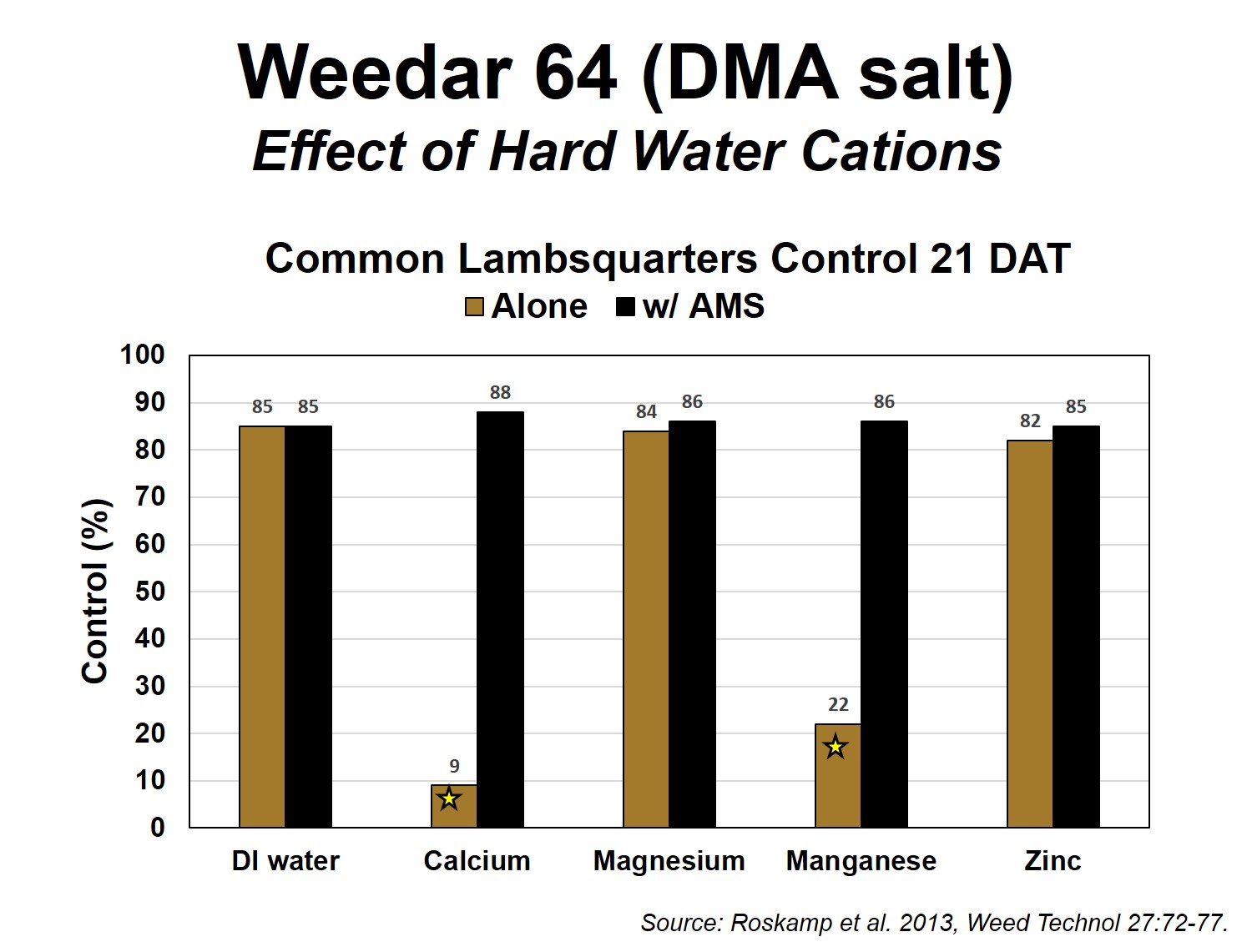 The minimum amount of AMS needed to tie up hard water cations is calculated with this formula:

While this formula can be used to overcome the hard water cations in the spray solution (spray tank), the formula does not take into account hard water cations on plant leaf surfaces, which are fairly prevalent.  Many plants, such as velvetleaf (Figures 4 and 5), contain Ca on the leaf surface, and additional sulfate is needed to overcome the antagonism which can occur after the spray solution leaves the nozzle. 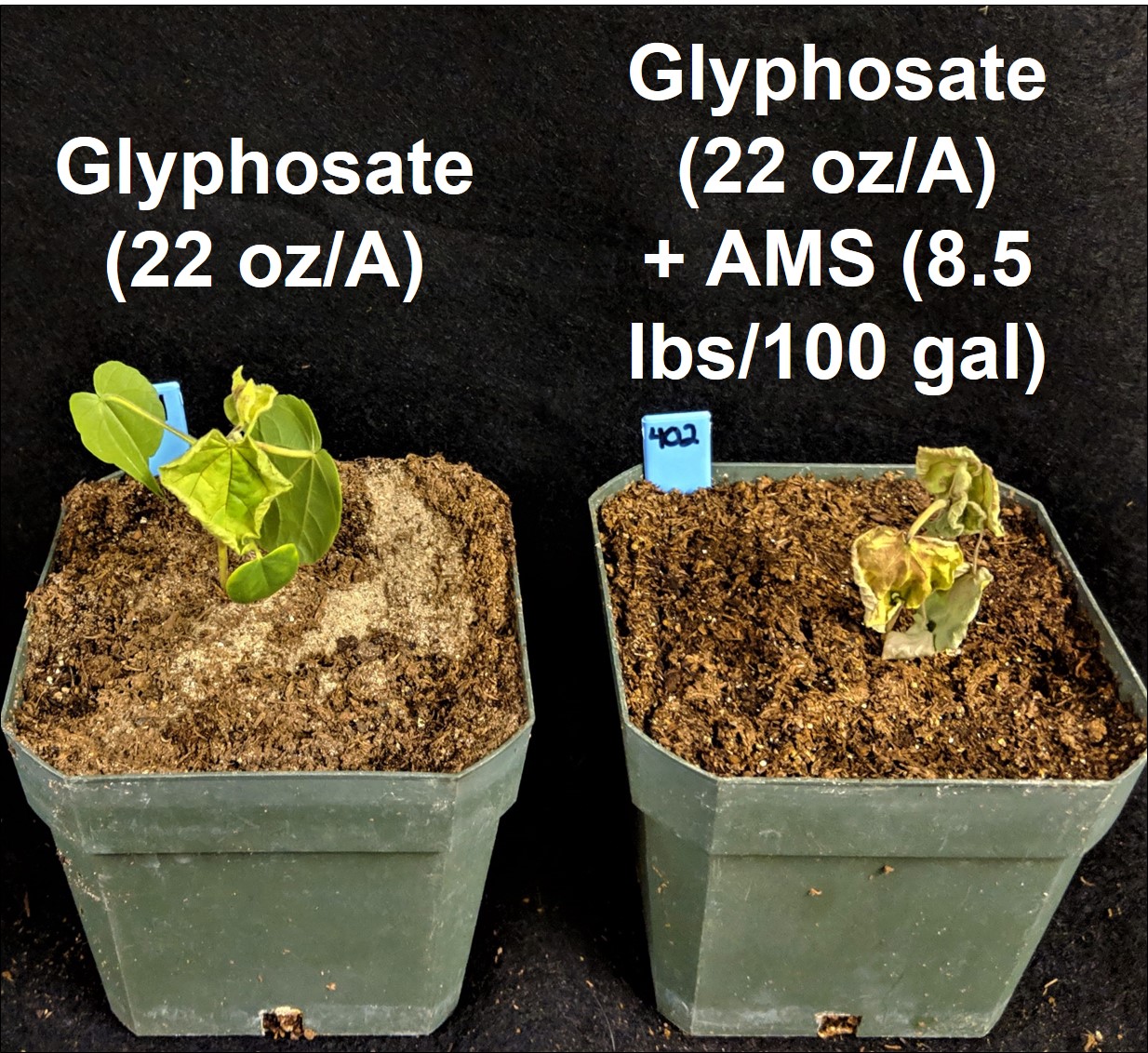 Figure 4. Effect of Ammonium Sulfate (AMS) on velvetleaf control with glyphosate in the greenhouse.

It is difficult to calculate the amount of ammonium sulfate needed to overcome Ca on the leaf surface.  This is the reason why herbicide labels typically contain statements that indicate that rates of AMS, 8 ½ to 17 pounds of AMS per hundred gallons of water, are recommended on many glyphosate labels.  Since AMS has typically been a low cost spray water conditioner, the additional amount added to a spray tank has not been viewed as a major expense.  However, in this era of low commodity prices and pressure on farmers to reduce input expenses, there may be an opportunity to reduce the amount of AMS applied and not compromise herbicide activity.  It is highly likely that AMS rates can be reduced to the lower end of the recommended rate and herbicide activity will not be compromised.  However, we would advise that it will be important to understand your water hardness test levels before severely reducing AMS rates. 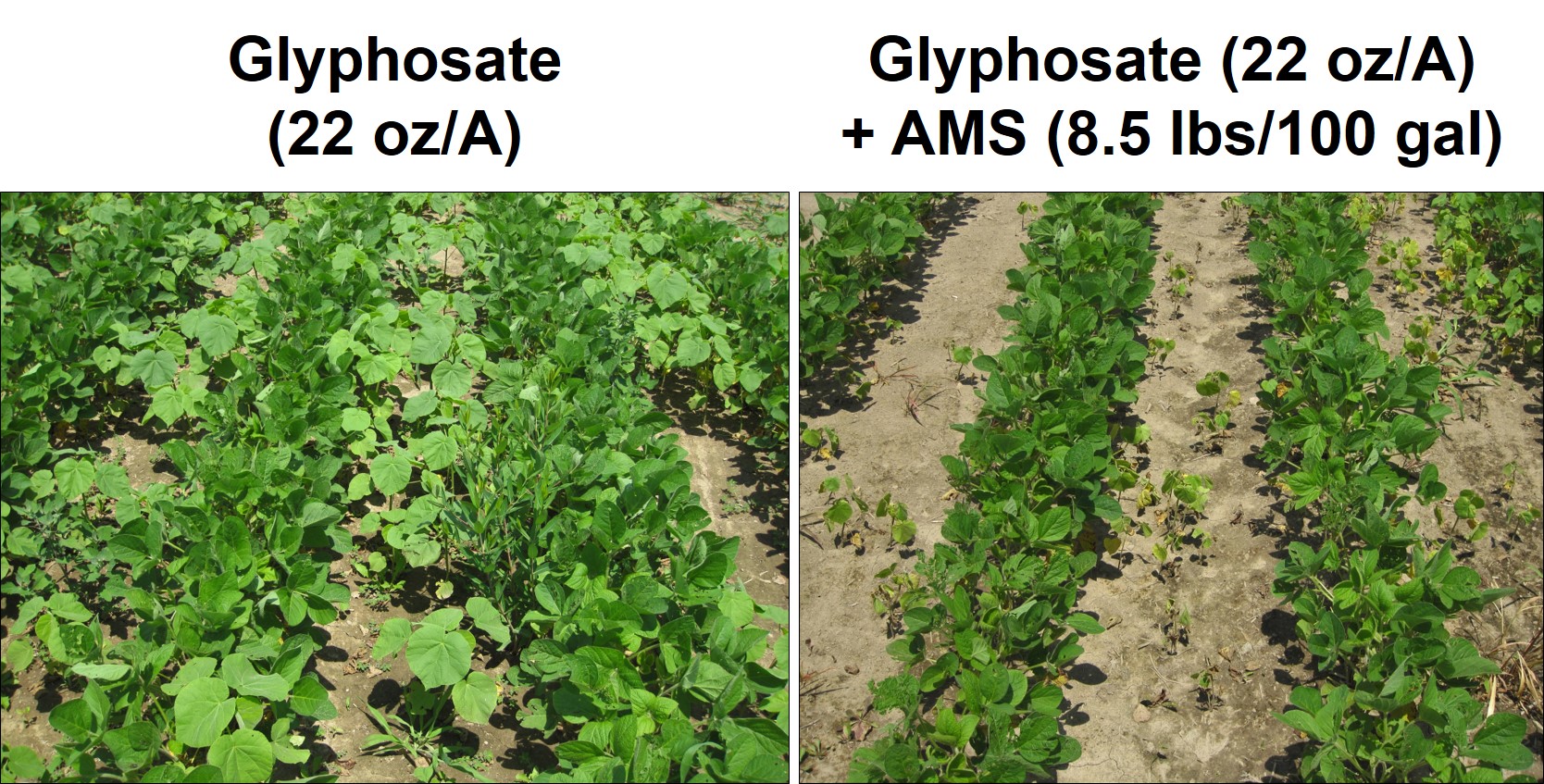 Figure 5. Effect of Ammonium Sulfate (AMS) on velvetleaf control with glyphosate in the field.

Please keep in mind that the benefit of AMS goes beyond conditioning hard water since improved weed control with herbicides and AMS can even be observed when using de-ionized (distilled) water.  Thus, a good rule of thumb would be to add more AMS to your spray solution than what is specifically calculated above for your hard water to account for this ‘physiological’ benefit and fall within the herbicide label requirements for AMS.