Augustian Farms LLC, of Kewaunee County in Wisconsin, is owned and operated by Aaron, Todd and Ginanne Augustian. Brothers, Aaron and Todd, wanted to continue the dairy farming legacy their grandparents started. Todd took ownership of the farm from his parents in 2001, milking 60 cows in a stanchion barn. In 2005, a devastating barn fire destroyed the farm facilities and the entire milking herd.

“We went to a neighbor’s farm for four years to build our equity back up. We rented a barn and started building the dairy herd once again,” explained Aaron.

In 2007, Aaron joined his brother Todd, bringing 100 animals to the farm, officially starting a farm partnership. In 2009, the brothers started an LLC and came home to the original farmland to build a new dairy, accommodating 400 cows. The farm continued to grow to what it is today, with 1,200 cows and some young stock raised off-site by custom growers. The Augustians also farm 1,100 acres to grow feed for their livestock.

Both brothers worked off the farm after completing school, but the farm always called them home.

“I worked off the farm for 10 years after technical school and realized that wasn’t what I wanted to do. I wanted to farm and work for myself. Once it’s in your blood, it doesn’t leave. There’s something about being out on the land every day and working with employees. We all share the same passion and we enjoy seeing each other grow,” explained Aaron.

When rebuilding after the fire, the brothers had an opportunity to improve the farm, building new dairy barns and a milking parlor. Along with building new structures, the brothers wanted to increase conservation efforts on their farm to make it truly regenerative for the future.

“The waterways were narrowed due to tillage practices in the past; we widened the water-ways to 30 feet and straightened them back out. Now, we trim them a few times each summer. This has really kept the water flowing well,” explained Aaron. The Augustians also planted conservation cover with native grasses to benefit wildlife and honey bee habitat on the acreage.

The Augustians grow corn, alfalfa and wheat, all used as forage for the cows.

“All the corn gets chopped and we also buy some alfalfa, dry corn and corn silage from our neighbors. We have manure agreements with our neighbors and they buy nutrients back from us to apply on their land; the partnership works very well,” said Aaron.

Because of their conservation efforts, the Augustians were approached to join the Door-Kewaunee Watershed Demonstration Farm Network. The Network features four farms that demonstrate the best conservation practices to protect the Great Lakes. The USDA-NRCS and the Wisconsin Department of Agriculture, Trade and Consumer Protection, are guiding this effort in cooperation with Peninsula Pride Farms, a farmer-led organization.

“The Network also has two demonstration farm managers, Nick Guilette and Nate Nysee; these key people help the partnership succeed,” said Barry Bubolz, NRCS Area GLRI Coordinator. “I enjoy working directly with the Augustians and the partners through the demo farms. This partnership fosters beneficial conservation management decisions on these demo farms, and subsequently, on many area farms, that help keep our natural resources sustainable for future generations,” said Guilette.

Through the demo farms, the Augustians are focusing on interseeding cover crops, applying manure to a growing crop, using management practices to handle leachate water and managing cover crops and manure application. Working through EQIP funding and the network collaboration, the Augustians tried multi-species cover crops. 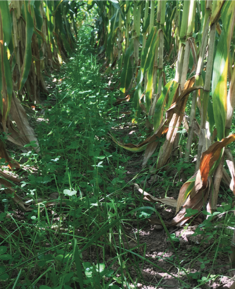 “We started small. We have done some no-till in the past but never incorporated cover crops before. We planted 23 acres of cover crops and had success. The following year we planted 100 acres. Between alfalfa, rye and multi-species cover crops, we now have half the farm in cover over winter,” said Aaron.

The demo farms have enabled the Augustians to partner with NRCS and the other participating farmers to learn and network. “We all put our heads together to see what works and learn from each other’s successes and failures,” explained Aaron.

“That mix ended up growing knee high and I thought we were going to have an issue with a thick mat on the ground come spring. I was amazed in the spring, when all that biomass had decom-posed, and the field was bare; it just disappeared over winter. The soil biology is working, and it really did what NRCS said it was going to do. It was hard to believe at first, but I’ve seen it works,” explained Aaron. “Growing the cover crops, we’re not sacrificing yield, while changing and updating our practices.”

When the Augustians joined the Demo Farm Network, soil tests were done on the farm for baseline data. A soil sensor electrical conductivity test was also completed to map potential bedrock and further see different soils and pH levels. “We will come back at the end of the initial five-year contract and do the same tests again to see how much we built organic matter and lowered phosphorus,” added Barry.

“I know the soil health numbers will go up because I can already tell, with the increased no-till and cover crops, the ground is much more mellow now compared with the conventionally tilled fields,” added Aaron.

The Augustians have also seen a decrease in erosion. “If we can get that cover crop established well in the fall, it really helps in the spring to give protection,” said Aaron.

“Conservation is very important to me. With the economy of farming right now and the tight margins, the less passes we can do with tillage and heavy equipment are going to make us more profitable and we are also building the soil health at the same time. I don’t know how we put a price on that but it’s going to be huge,” added Aaron.

Improvements for the Future

Through conservation efforts, the Augustians want to leave their land better for the next generation. “We were doing things the way we had been taught and now we realize there is a much better way. I would like to get to 100% no-till and cover crops. We are working on figuring out our nutrient applications and I know we can get to that goal,” added Aaron.

The brothers are proud of building their dairy back after the fire. “The Augustians have an openness to try new ideas, think outside the box and hold field days to share ideas as part of the Network. This forward thinking makes it a pleasure for NRCS to partner and see their success,” explained Bubolz.

The Augustians tried interseeding alfalfa for the first time, at the same time the corn was planted. This attempt worked successfully, and they are going to try more acres in the future.

“This was an out of the box idea that was successfully implemented in 2018 and they have since had some good success with interseeding into growing corn with rye grass and clovers too,” said Bubolz.

The Augustians have agreed to try more acres because it worked so well the first time. “When we chopped the corn off, the cover crop was already established and really took off,” said Aaron. “Getting the diversity into the system was what the soil needed,” added Barry.

In December 2018, through a University of Wisconsin Discovery Farms partnership, the Augustians placed a surface water monitoring station on their farm. Baseline data was already recorded with conventional tillage from an earlier study in the county, now, the brothers are doing a no-till cover crop system with low disturbance manure to see how surface water data changes. 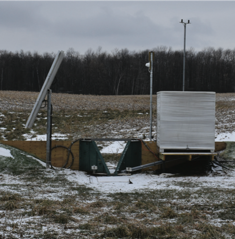 “We’re 100% committed to the Demo Farms; technology is rapidly changing, and the Demo Farms Network provides an avenue to learn about those advances, try them and gives us the support we need to succeed,” said Aaron.

The Augustians are happy their farm is part of a greater purpose and helps farming communities learn and progress. “The Augustians have been a pleasure to work with over the years and are leading the way in demonstrating the latest technologies on their farm. They strive to teach other farmers the benefits of soil health and cover crop practices. NRCS can help farmers try these proven methods on their farm; they just need to stop into their local USDA Service Center to get started,” added Joe Johnson, NRCS Kewaunee County District Conservationist.

“So many good things are coming out of this partnership. Farmers are generally concerned about the land and we’re all working to adapt our best practices; we feel like the Network partnership has given us an avenue to make a difference. It’s also nice to be on the cutting edge of technology at the same time,” said Aaron.

Getting Out of a No-Till Rut with Cover Crops