When Matt Griggs decided to embark on no-till practices more than a decade ago he was already dealing with a degraded soil resource. More than 100 years of conventional tillage and a monoculture of cotton on his family’s rolling farm ground had caused erosion and stripped soils of organic matter.

Whenever it rained, the ground turned to sugar and washed off. And even after shifting to no-till, a drought in 2007 that was exacerbated by a lack of water infiltration caused him to lose $100,000 in net income.

The emergence of herbicide-resistant Palmer amaranth was another hit.

“I knew tillage wasn’t going to be the answer. I saw what 100-plus years of tillage did to the farm. I knew we couldn’t go back to that. But I also knew chemicals weren’t going to be a long-term sustainable solution,” Griggs told attendees at the National No-Tillage Conference last January. 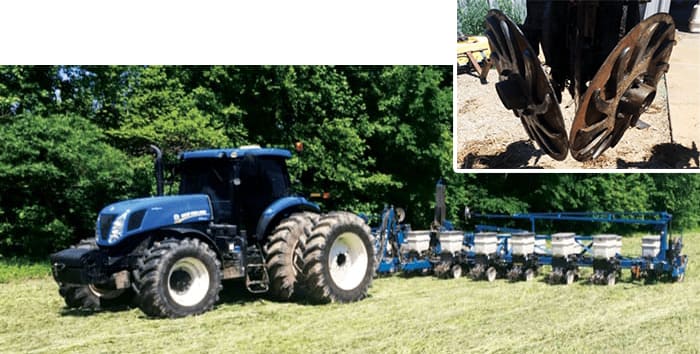 PARTING THE ROW. Matt Griggs no-tills corn and cotton into living cover crops with a Kinze 3600 planter, using row cleaners (inset) that he designed himself out of old disc openers to create a path for seeding and keep the vegetation from wrapping around planter components.

Put Down the Jug

Griggs no-tills cotton, cereal grains, corn and soybeans on 1,600 rolling acres near Humboldt, Tenn., on a farm that’s been in business since 1882. The era of conventional tillage ended in the early1990s when the family shifted to minimum tillage. Griggs started implementing no-till in 1998 and he started dabbling in cover crops after that.

The 2014 crop year convinced him it was necessary to go all-in on cover crops rather than dipping in his toe. Despite perfect growing-season weather and a 188-bushel average for corn, he only logged net income of $55 an acre due to hefty spending on various inputs.

“That was my last year of what I like to call ‘farming out of a jug,’” he says. “If that’s the best year you’ve ever had, the returns ought to better than that.”

During a hot, dry growing season in 2016, Griggs went to cover crops on a large scale, planting cotton and soybeans into “green” cover crops. He accepted some emergence problems early on with cash crops as a compromise to starting to improve soil biology more quickly.

Even with poor corn prices and subpar yields, Griggs says leaning more on cover crops that year reduced his expenses enough to double his per-acre profits.

It wasn’t easy. His Kinze 3600 12/23-row planter wasn’t set up for planting green. During his first year, cover crop vegetation wrapped around the planter’s shafts, sprockets, row cleaners and closing wheels only 10 feet after starting his first pass.

“I took row cleaners on and off. I took my coulters on and off, I changed closing wheels. I got absolutely nothing done. It took me 10 days to get 500 acres planted,” he says.

So last year he made his own row cleaners out of old disc openers on his scrap iron pile. Using a plasma torch he cut them down to the right diameter and bolted them to the backside of his Kinsey floating row cleaners to make a solid row cleaner.

“I made the disc a little bit larger than the teeth on the row cleaner to keep the teeth from actually grabbing the cover crop and wrapping up,” he recalls. “They worked great the first year, but I lost a lot of them in the field because that plate put a lot of extra stress on the mounting bolt, even after I upgraded to Grade 8 bolts. But I was able to part the cover crop just enough, removing any interference to the seed falling in the slot.

“They don’t move a lot of residue, but they part the cover crop just enough to where you don’t have to fight all of it getting the seed in the ground. I’ll be the first one to say if I didn’t have them last year, I don’t think I would have got an acre of cotton up.”

He also installed heavier down-pressure springs and adjusted the frame and transport wheels on his planter to increase down pressure.

Finding Your ‘ROI’ with Cover Crops in No-Till Systems

Study farmer-proven ways to implement cover crops into your daily field management. Hear from a cover crop skeptic and his included descriptive data derived from a trial-run period with cover-crop mixes! No matter what side of the fence you land on, download this special cover-crop report and find information-packed farmer testimonials, data and advice suitable for both the experienced and possibly unconvinced farmer. Download now »

Ahead of corn, he seeds 10 pounds each of cereal rye, oats and winter pea, 2 pounds annual ryegrass, 8 pounds crimson clover and 6 pounds vetch. The same mixes are used in his NRCS experimental plots.

To terminate cover crops, Griggs sprays paraquat and follows within a couple of hours with a roller-crimper. This flattens the vegetation to make it easier to plant into, helps with weed control and allows seedlings to get more sunlight, he says. That’s followed immediately by the planter.

Griggs pays special attention to how the laid-down covers will affect planting. During his first two years rolling covers it didn’t matter which direction he went because he had less biomass, but last year he rolled them going with the grain.

One change was made for this year, as Griggs rigged up his hooded sprayer to apply Roundup in March in 10-inch-wide bands so he could plant into a clean seedbed. The hoods protected his cover crops and he followed the herbicide with paraquat, rolling and planting. “Planting was phenomenal and I should get the best stand of cotton I’ve ever had,” he says.

Griggs’ area of western Tennessee typically gets an average of 52 inches of rainfall per year, but he doesn’t always get the rain when he needs it. 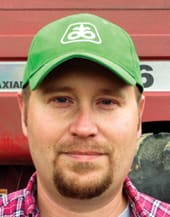 “If I didn’t have those row cleaners last year, I don’t think I would have got an acre of cotton up.”— Matt Griggs

And although many no-tilled soils can infiltrate rainfall at a rate of 1-2 inches per hour, Griggs believes that’s the limit on what no-till alone can deliver, depending on soil types. He notes many of the spring storms in his area can drop that amount of rain in 15 minutes.

Griggs is in the third year of using one of his fields to study adaptive management. One experiment, in a partnership with NRCS, is using long-term, side-by-side strips to measure water infiltration improvements with no-till alone vs. no-till and cover crops. They’re measuring infiltration as well as crop yields.

Last spring, no-tilled ground with no covers infiltrated at 2 inches an hour, but they noted it took 30 minutes to get the first inch soaked in and the second inch of water barely got into the soil. In the strip with cover crops seeded previously, “the first inch went in basically as fast as we could pour it in, at a rate of 62 inches an hour,” Griggs says.

The second inch infiltrated at a rate of 12 inches an hour, he says.

In a drought, Griggs says those enhanced infiltration rates provide enough soil moisture to cover him for 2-3 weeks, where with no-till only or conventional tillage it might help for 2-3 days or even less than that.

“This is going to allow me to capture what the good Lord gives me. I don’t have any fields that I’m capable of irrigating. They’re just not big enough, plus the cost is prohibitive. This is the way I’m going to irrigate my fields,” he says.

In 2017, the plots with no-till alone averaged 1,186 pounds per acre, while cotton following warm-season covers yielded 1,287 pounds an acre and cotton after warm- and cool-season covers averaged 1,221 pounds. Griggs says it was the first time he’s been able to show a yield increase due to preceding cover crops.

“Cotton brings about 70 cents a pound, so that’s almost an extra $30 an acre,” Griggs says.

READY TO GO. Matt Griggs rigged his hooded sprayer this year to band Roundup in a 10-inch wide path into no-till cotton while protecting his cover crops. He says the setup worked well this spring and he expects excellent cotton stands.

He expected different results because it was a good growing season that year. “I expected the extra moisture, and hopefully extra nitrogen that the cover crop would provide for extra yield, but for corn it didn’t happen,” he says.

The strips with no applied N yielded 136 bushels an acre of corn in no-till alone vs. 119 bushels after cover crops, which Griggs believes shows that N was being tied up to decompose residue. Corn with 85 pounds of N applied yielded 169 bushels with no-till alone vs. 146 bushels with cover crops, and with 200 pounds of N those numbers were 229 and 226 bushels, respectively.

“I’m getting there with soil biology, but I don’t have enough to overcome this nitrogen penalty,” he says.

Griggs has increased the legume component of his cover-crop mix and reduced the grass component to shoot for a more favorable carbon-to-N ratio. He’s also pushed up sidedressing to V5 instead of V8 or V9.

But he does see some progress with soil biology after taking weekly tissue tests in 2017 from the cotton plots from 45 days to 116 days after planting. He found no-tilled ground tested higher in sulfur, calcium and manganese. Cover-cropped ground only 40 feet away tested higher with other nutrients in the presence of cover crops. He went to the same sampling spots every week.

“The soil type’s the same, the fertility’s the same, so why does the cover crop plot test higher? I believe it’s because I’m starting to boost microbial populations,” he says. “It’s taken all these nutrients I’ve got in the soil and it’s starting to release them and make them in plant-available form.”

Leaving the Comfort Zone for a Greener No-Till Future