If you ask about Asiatic garden beetles, most Michigan corn growers will tell you they have never seen them or maybe they saw just a couple of them buzzing around their lights last summer. However, when we asked about corn stands that seemed to go backwards in terms of plant height uniformity last season, a whole lot more folks raised their hands at Michigan State University Extension winter meetings.

Some attributed the challenges to planting depth. Others cited phosphorus deficiencies (purpling corn). Still, others blamed sandhill cranes for missing plants, which is still a very real possibility. However, the real culprit may have been Asiatic garden beetle white grubs, says Extension educator Bruce MacKellar.

Asiatic garden beetles are very hard to detect. The adults are nocturnal and often feed, mate and lay eggs during the nighttime hours. They also like to bury themselves under the soil surface during the day. It is likely the beetles move from the corn fields where they emerge to thick, dense canopy crops such as soybeans or potatoes to lay their eggs. Peak emergence in 2017 in southwest Michigan was in the third to early fourth week in June. Eggs hatch in about a week to 10 days.

The larvae—C-shaped white grubs—feed happily on soybean and potato roots. When they are small, even large numbers of the pests are not likely to cause visible above-ground symptoms of damage to these crops. As the larvae get larger—late second or early third instar—they have been found to feed on potato tubers, causing pock mark feeding injury symptoms on the potatoes. These larvae burrow back down in the soil to overwinter.

The real challenge from the Asiatic garden beetles occurs the next season. The white grubs move back up towards the surface as the soils begin to warm. These larger grubs are voracious feeders on corn seedling root systems. In early-planted corn where there are high numbers of Asiatic garden beetle white grubs, the plants often appear stunted with a purplish color visible in the leaves followed by tissue browning or seedling death. This usually occurs in irregular-shaped patches in the field. 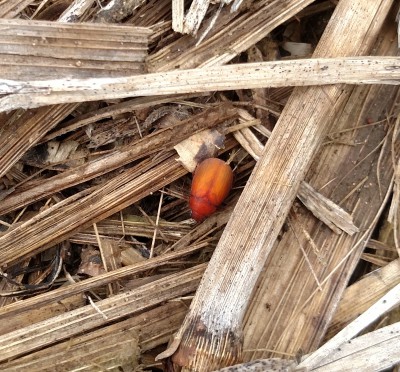 Newly emerged Asiatic garden beetles on June 23, 2017, in northern Kalamazoo County, Mich. Grubs, pupae and adults were found in the same areas in this field on this date.

Asiatic garden beetle damage was first noticed in northern Indiana in 2007. The acres impacted by Asiatic garden beetles and the number of insects observed in infested fields and around lights have increased in Michigan over the last couple of years. Initially, we found only a few fields across the region with stand reduction, some which were significant enough to force replanting. In 2017, there was a significant increase in damage.

Around the time of pupation, we began scouting for grubs near marestail in southwest Michigan. Early in the season, we found elevated numbers of grubs around marestail. To our surprise, however, as pupation progressed into emergence, we began to find adult beetles around the base of the plants, and we found a lot of them—as many as 40-50 beetles per marestail plant.