Exactly a month ago, I wrote a Michigan State University Extension article about grubs that included a handy field identification sheet for grubs to assist in identifying different species, says Christina DiFonzo. It’s time to pull out that sheet if you are in the Mich., Ind. and Ohio region.

Planting in the region was delayed in many locations due to cold, then extremely wet conditions, says the Michigan State University entomologist. Crummy stands were being attributed to standing water, weed competition or herbicide injury.

But if the stand is poor on the top of a rise in the field (i.e., an area that did not have standing water) or in locations you know have sandy soil, take another look. 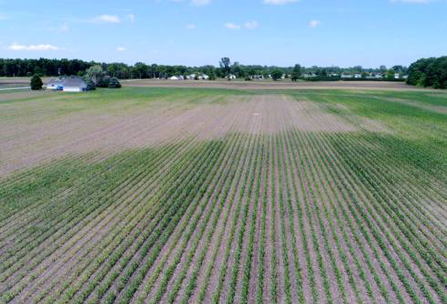 Aerial view of a field in Monroe County, Mich. showing thin stand and yellowing (the thin, yellow areas are a replant). There were an average of two grubs per cup cutter, but hot spots with six to seven per cutter. Pupae were found this week. Photo by Ricardo Costa, MSU Extension.

However, I confirmed several damaged soybean fields in northern Indiana. I have visited fields from Decatur, Michigan, in Van Buren County, east to Dundee, Michigan, in Monroe County, and my lab is following several fields on a weekly basis.

What we learned so far:

Many people are experiencing this insect for the first time as populations slowly push northward.

I don’t have many answers, but I am cooperating with the field crops entomology program at Ohio State University to pool data and get a better understanding of the life cycle and damage period for this vicious little insect.

In the fall, we will be looking for infested locations to sample next spring, so keep the locations of bad fields in mind or report them to me at difonzo@msu.edu.

Fall is a Good Time to Attack Weeds, Disease

Atrazine Back Under Attack From Environmental Group