Soil gets tired. After years of supporting a rotating cast of crops, the soil’s nutrient supply is often exhausted. The tilling, turning, and planting also degrade the organic matter in the soil and its ability to stay hydrated.

“All that moving and disturbing of the soil really beats it up,” says Eugenia M. Pena-Yewtukhiw, a plant and soil scientist at the University of West Virginia. “So it’s helpful to let it rest, let it wait. The question is, how long?” 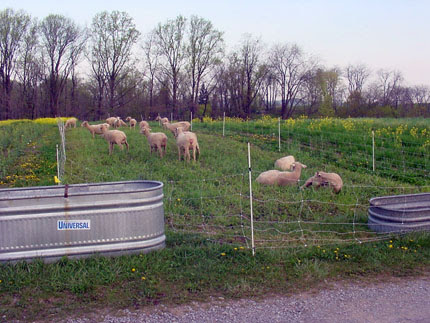 Researchers brought sheep to the grass fields. The sheep get a meal and the soil gets a fresh coating of nutrients from the sheep manure. Photo courtesy of William Bryan.

Letting the soil rest can be difficult economically for farmers, so Pena-Yewtukhiw wanted to discover the least possible amount of time it would take to allow the soil to heal from intensive crop rotation.

To answer that question, Pena-Yewtukhiw planted sod—or grasses—in a field that had been cycled through four consecutive years of row crops. Row crops like corn, soybeans, wheat, and kale are grown in rows wide enough to be tilled with tractors.

Pena-Yewtukhiw replaced the row crops with a combination of perennial grasses and legumes, which only needed to be planted once. The soil got a break from tilling, which disrupts soil clumps and compacts the soil, making it more vulnerable to erosion and dehydration. Compacted soils also don’t allow roots to penetrate easily, making it difficult for plants to thrive.

During this break from activity, the grasses and legumes flourished. When the grasses were mature, Pena-Yewtukhiw brought sheep to the field, letting them graze and spread their manure on the soil. The sheep were crucial because their manure restored organic matter to the soil. Organic matter is like vitamins for soil: it gives it a nutrient boost, helps it retain water, and feeds helpful bacteria. In addition to feeding the sheep, the grasses can be harvested for hay.

After three years, Pena-Yewtukhiw found signs of health returning to the soil. There were more organic matter and nutrients in the soil. The soil’s ability to clump also improved, making the soil porous enough to allow roots to infiltrate. Root systems break up the soil, improving the structure and adding nutrients when the roots decompose.

“Three years is not bad,” said Pena-Yewtukhiw. “It’s not too long, and there are some big differences.”

But Pena-Yewtukhiw was quick to say that there’s no magic number. Local conditions, like weather and soil type, matter. Some soils may take longer to recover, and some soil characteristics, like pH, take longer to improve. “The soil is constantly changing,” she said. “We can improve it only to a point. But we can make it better.”  She also said there are some important management lessons to take away. For example, allowing the sheep to overgraze will damage the grasses and the soil.

But giving the soil a break is a time-honored tradition. Europeans have used this method for hundreds of years. The practice didn’t catch on in the United States. Pena-Yewtukhiw hypothesizes that Europeans had to be thrifty with their soil because they didn’t have a lot of space. “In the U.S., you have so much land, so you can just move on when soil stops being productive,” she said.

However, restoring soil health is an important part of sustaining the planet’s population. Pena-Yewtukhiw wants to find ways for farmers to feed people and heal their soil. “We can’t produce food from thin air,” she said. “It always starts with the soil.” And even three little years of rest will make a difference.

Read more about this work in Soil Science Society of America Journal.

What Crop Rotation Can Do for Soil Biology