What Crop Rotation Can Do for Soil Biology

A soil biologist explains how a high ‘diversity index’ of cash crops and covers unlocks soil biology potential and increases the viability of no-till systems.

If you’re no-tilling, soil biological activity in your fields is most likely better than your conventional tillage neighbors.

But to really increase the robustness of soil microbial life — and potentially increase nutrient cycling and crop yields — a more intensive crop rotation and diverse species of cover crops will do a better job than simply no-tilling monocultures, says Lisa Tiemann.

With a team of researchers, the Michigan State University Extension soil biologist recently studied the effects above ground plants have on below ground processes.

“A diverse community of soil organisms is going to help control plant disease, insects and weed pests, help form beneficial symbiotic relationships with plants, and there’s going to be recycling of nutrients and improvement in soil structure, as well as better water and nutrient-holding capacity,” says Tiemann.

A teaspoon of soil has plenty of microorganisms that aren’t visible to the naked eye — more than 1 billion cells of bacteria and at least 10,000 different species, Tiemann says. There may also be up to 1 million different cells of fungi and up to 20 meters of fungal hyphae.

Predators of the soil underground, like protozoa, amoeba, flagellates, ciliates and nematodes, eat fungi and bacteria and release nitrogen (N) in a plant-available form. And larger organisms that are visible to the naked eye, such as mites and springtails, as well as moles and earthworms, are part of the soil scene and help complete the soil food web. 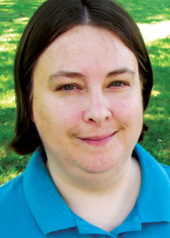 “Eighty to 90% of your microbial communities can be dormant, just sitting there waiting for the carbon they need for energy and the nutrients they need to build their

Microbes dominate nearly every system on Earth, but can be disturbed when there’s a change in climate, temperature or precipitation regimes, resulting in a loss of certain functions, Tiemann says.

But in more diverse soil microbial communities, there’s a better chance another microbe can survive the changes and perform the same function, she notes.

Faster and more efficient nutrient cycling is another benefit to soil biodiversity, Tiemann says. She cites a 1982 study where researchers sterilized soils and put back bacteria and other microorganisms, and notes higher levels of plant-available N in soils with a complete soil food web, such as where amoebas ate bacteria and nematodes consumed amoebas.

In a similar study with disease suppression in the root and shoot biomass of barley, researchers found 90% disease prevalence when fungi only were introduced to the crop and 75% prevalence when collembolan were added to consume the disease-carrying fungi.

Even though this was a controlled system, “it’s just a way to highlight if you have a really diverse soil community, there’s more chance that you’re going to have a collembola that’s going to feed on that pathogen and help suppress disease,” Tiemann says.

Tiemann and other researchers have been interested in the subject of plant diversity in agriculture — from monocultures and multi-crop rotations to rotations with diverse cover crops — and how that affects soil properties below ground.

They mined data from 367 different studies in different kinds of soils, climates and management conditions, and found that soil carbon, organic matter and N were increased where there was some kind of crop rotation, and there was an even bigger increase in microbial biomass needed to create organic matter.

Tiemann and the group also sorted the 367 studies by conventional tillage or no-till systems and found there was an increase in soil N and soil carbon (C) by changing from a monoculture to crop rotation in both systems, although the increase was higher for conventional tillage due to improvements already being realized through no-till. 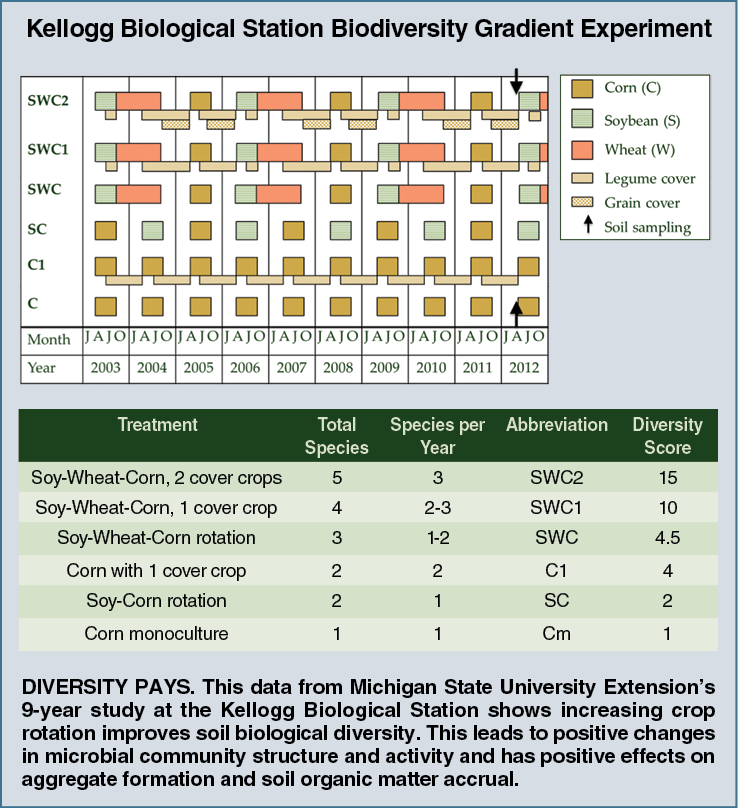 Tiemann oversaw another 9-year study at the Kellogg Biological Station in Hickory Corners, Mich., where researchers wanted to isolate rotational diversity from all other management factors and look at how it impacted below ground biological processes.

To do this, they added crops sequentially into a rotation to examine the effects of diversity.

They started with a monoculture of corn, then added soybeans, wheat and one or two cover-crop species to the rotations, one at a time. They also assigned a diversity score to the different research blocks.

Here’s a sampling of what they found:

“What we’re finding is that when you increase your rotational diversity, you’re increasing the quantity, quality and complexity of the residues that are going into that system,” Tiemann says. “So that’s going to stimulate your microbial community.”

Soil organic matter is absolutely crucial in this above ground/below ground relationship, Tiemann says, as it acts as a nutrient reservoir, supports biological activity and is the base of food webs and food chains. 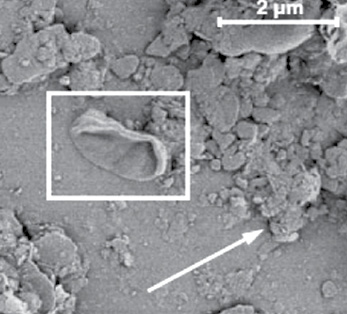 UP CLOSE. The lysed bacterial cell (square) is in the first stages of becoming soil organic matter (arrow). All residue and organic material must go through the microbial biomass before it can end up as soil organic matter, says Lisa Tiemann. Photo © MILTNER ET AL (2012), BIOGEOCHEMISTRY

One might ask, “Where does organic matter come from?” Tiemann says newer equipment available to soil scientists now gives them a better idea of what the chemistry of organic matter is and how it’s developed.

By using scanning electronic micrographs, Tiemann says she’s observed that soil microbes are in intimate contact with soil mineral surfaces and their dead bodies, and by-products of decomposition reactions are the primary constituents of soil organic matter.

So how do you activate your soil microbes and get them to form soil organic matter?

“Well, you may be surprised to hear this, but you have to actually wake up your microbes,” Tiemann says. “When we’re talking about soils outside of direct contact with plant roots, they’re like a desert to microbes and most of them are dormant.

“Eighty to 90% of your microbial communities can be dormant, just sitting there waiting for the carbon they need for energy and the nutrients they need to build their biomass.”

One way no-tillers can wake up their microbes is by adding organic amendments, Tiemann says.

A colleague of hers recently performed a meta-analysis of 224 different studies and found adding some kind of organic amendment to soil produces an average increase in microbial biomass of 36%. This would include crop residue or farmyard, livestock, poultry or swine manure.

“If you look at how many years it takes to get this increase in microbial biomass, it doesn’t take long at all,” Tiemann says. “Where you have less than 2 years of amendments happening, you’re still going to get roughly the same 36% increase that you might see after 25 years.

“So if you can add these amendments to the point where you’ve increased your microbial biomass and maintained that, eventually you’re going to start seeing increases in soil organic matter as well.”

What Cover Crops Can Do for Your Grain Sorghum