Continuous Cropping with 13-15 Inches of Precipitation?

Producers in semi-arid regions like western Nebraska are often faced with a shortage of water for crop production, and use fallow to store precipitation for future crop use. Producers believe that fallow reduces yield variability and crop loss due to drought.

However, fallow degrades soil by increasing soil erosion and favoring decomposition of organic matter. To minimize this damage, some producers adopted no-till to preserve crop residue on the soil surface, which also improves precipitation storage during fallow.

Consequently, some changes in rotations have occurred, such as adding corn or proso millet to the winter wheat-fallow rotation.

Long-term rotation studies in the Great Plains have shown that soil health can be regenerated with no-till and more intensive cropping. But a striking trend in these studies is that fallow suppresses restoration of soil health, even in rotations where fallow occurs only once every 4 years (such as the winter wheat-corn-proso millet-fallow rotation). Fallow minimizes the benefits gained with no-till and more intensive cropping.

Thus, a paradox exists with fallow: it increases water supply but damages soil health. Some producers in higher-rainfall areas of the Great Plains have used no-till for 20 or more years. An intriguing trend with these no-till systems is that crop yields often exceed expectations based on water and nutrient supply. These producers attribute this yield gain to improved soil health, alleviating the impact of water shortage on crop yield.

This trend is being demonstrated by the Lerwick family farms near Harrisburg, Neb. They have continuously cropped with no-till for 20 years in a precipitation zone of 13-15 inches a year. The prevalent system in this area is winter wheat-fallow with tillage, but the Lerwicks’ rotation is winter wheat-corn-sunflower-proso.

To understand why the Lerwick’s system is successful, we examined yield trends in their system and the conventional wheat-fallow system. 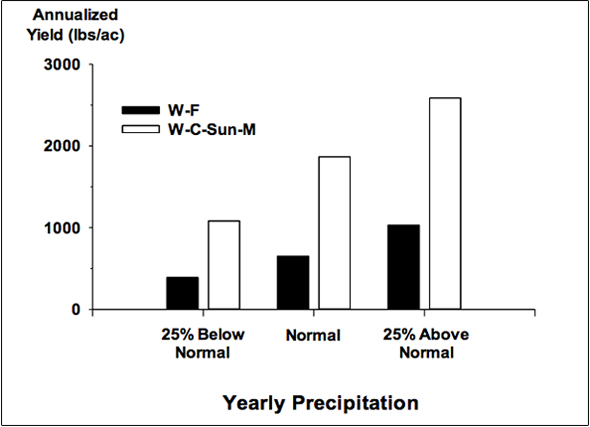 Winter wheat yield in 1996-2000 was similar to wheat after fallow because no-till maintains crop residue upright to increase snow catch and water supply.

The increase in yields across time is due to improved soil health.  In 1996, sandy loam soil on the Lerwick farm had an organic matter (OM) level of 0.9%. By 2007, OM had increased to 2.6% with no-till, continuous cropping. Increased OM along with higher fungi density due to no-till leads to greater stability of soil aggregates, thus improving water infiltration.

A study at Mandan, N.D. showed that after 18 years of no-till and continuous cropping, water infiltration was 3 times higher than in a tillage-based wheat-fallow rotation. Presently, winter wheat yields more in the Lerwick system without fallow than in the winter wheat-fallow system.

A second reason producers use fallow in this area is the belief that precipitation stored during fallow will reduce yield variability. To examine this belief, we calculated the standard deviation (SD) of winter wheat yields across the 20 years.

Land productivity is more than doubled with no-till, continuous cropping.

To compare land productivity between continuous cropping on the Lerwick farm and winter wheat-fallow in Scottsbluff County, we calculated annualized yield by adding yields of all crops in a rotation for a given year, and then dividing by the number of years in the rotation.  Annualized yield for winter wheat includes the investment of fallow in crop production, as winter wheat yield were divided by 2. 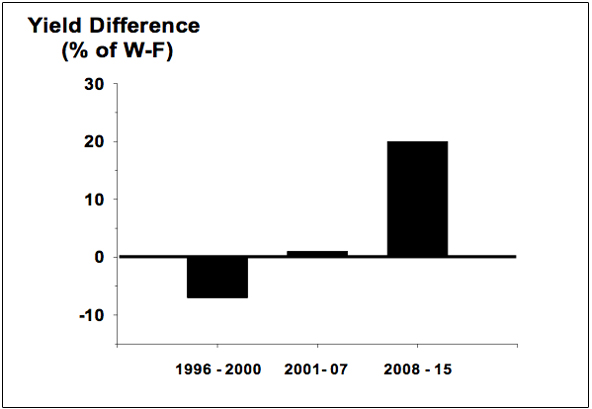 Winter wheat yield after fallow in Scottsbluff County averaged 24 bushels. Precipitation varied widely in these years, so we grouped years by precipitation levels: 3 years were considered normal, 2 years were 25% below normal and 3 years 25% above normal.

Even though annualized yield does not include an economic component, it does show that potential land production is higher with continuous cropping in this semiarid climate. Similar trends has been shown with long-term rotation studies in northeastern Colorado and western South Dakota: land productivity is more than doubled with continuous cropping and no-till compared with a tilled, wheat-fallow rotation.

A recent observation has stimulated the Lerwicks to consider strategies to further improve soil health. An area of pasture was converted to cropland with no-till. The pasture was adjacent to cropland that had been in continuous cropping and no-till for 20 years, yet they noted that sunflower growth was 15 to 20% higher in the former pasture land. 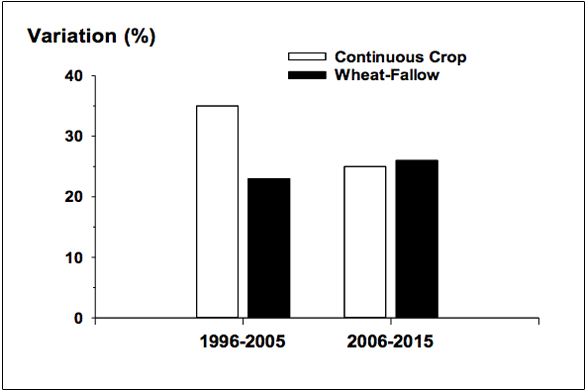 Figure 3. Annualized yield in the continuous cropping system on the Lerwick farm compared with winter wheat-fallow from 2008 to 2015.  Data were grouped by precipitation levels, normal and 25% above or below normal.  Data for winter wheat-fallow are from Scottsbluff County, NE.

They attribute improved growth to more favorable physical and biological functioning of soil, and believe that their croplands can still improve with no-till and continuous cropping.

They also would like to expand their crop diversity by adding a legume, such as dry pea, to their rotation. If successful, this practice may improve yield by enhancing microbial diversity in soil.

Adding a legume to the rotation would be especially favorable for rhizobacteria, a microbial species that associates with crop roots. Higher rhizobacteria density on roots increases crop yield by improving photosynthesis efficiency, nutrient uptake, and drought tolerance. Rhizobacteria also synergistically interacts with mycorrhizae to increase crop yields, even when adequate water and nutrients are available.

The Lerwicks are concerned that dry pea or other legumes may not produce sufficient after-harvest residue to protect the soil. A possible option may be to grow dry pea as a cover crop, as even with shorter growth intervals, dry pea still favorably affects the microbial community. Dry pea could be grown as a cover crop in the fall after winter wheat harvest.

Insight for semiarid producers, based on 20 years of continuous cropping.

The Lerwicks have not only eliminated fallow with their no-till, continuous cropping system, but also have developed a financially successful operation.  To achieve this goal, they followed these principles.

First, they designed a rotation comprised of a diversity of crops. Second, they preserve crop residue on the soil surface and use a stripper header to maintain residue upright, thus increasing snowcatch and water storage in soil.

A third principle relates to sunflower, which is one of their most profitable crops.