By Mark Moore posted on April 1, 2010 | Posted in Strip-Till Farming

When it comes to equipment, Eric Larson is all about maximizing his investment, no matter what the season. So when he began researching strip-till units, he wanted one that could run in both the spring and fall, and adapt to changing conditions.

Larson and his brother, Carl, farm near Fullerton, N.D. Farming on the Corn Belt’s northern edge can subject them to some challenging growing conditions, from delayed spring planting to fall harvests that can last until the next spring.

“The past two fall seasons, we had about 10 to 15 days to get the fall strips done,” Eric Larson says. “The weather and other harvest duties can spread that over 3 to 4 weeks. We can freeze up any time after mid-October. When we go, we go hard.”

Spring tasks can begin between April 1 and May 1, depending on field conditions. And flooding is always a concern, which also delays spring planting.

They raise a crop rotation of corn, soybeans and pinto beans.

“We basically got into using a strip-till unit to accurately place fertilizer in the row where the corn is growing,” Larson says. “There were two reasons for that.

“We apply a lot of fertilizer in the fall while we are harvesting, because that saves time in the spring. We also have load restrictions on our roads in the spring, so we can’t always haul a lot of liquid fertilizer.”

He’s been incorporating strips into his farming operation for more than a decade.

During the fall, Larson’s 24-row, 30-inch Blu-Jet strip-till toolbar, which is outfitted with Raven anhydrous controls and ground-driven liquid pumps, applies 80 to 100 pounds of nitrogen per acre. 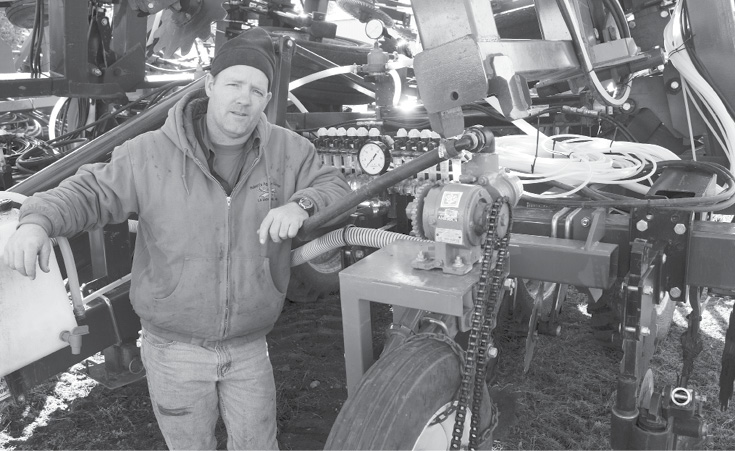 The ground-driven pumps apply 10-34-0 in separate tubes behind the anhydrous tubes. Larson has modified the unit by adding a separate tank that injects N-Serve.

“We inject the N-Serve directly into the anhydrous stream to help keep the nitrogen from volatilizing,” he says.

While Larson has noticed the benefits of strip-tilling — mainly an improvement in soil tilth — the past two planting seasons have tested the unit.

“We wanted to use strip-till to conserve moisture, but the last 2 years have been exceedingly wet during planting,” he says.

So he’s modified the unit to be able to strip-till in the spring.

He’s experimenting with applying liquid fertilizer during the spring with the Blu-Jet strip-till rig.

“That is one nice thing about having the strip-till rig set up for liquid fertilizer,” Larson says. “If we freeze up before finishing, we can still strip-till in the spring prior to planting.

“We put the remaining nitrogen and phosphorus on in the spring depending on what our soil test tells us. In the spring, it can be up to 45 gallons of a mix of 28-0-0 and 10-34-0, along with micronutrients if the soil test shows a need.”

This puts a lot of pressure on the planting operation in terms of productivity.

“I like having the fertilizer near the root zone versus just spreading it,” Larson says. “We have not seen any substantial gains in yield over conventional tillage, but we have in the past saved a tillage pass in the spring.”

Larson is contemplating a pass over last fall’s strips to fluff them up and place liquid fertilizer where they normally would with the 2-by-2 system on the planter.

“It’s just an experiment, and that would add in the pass I was saving in the past,” Larson says. ”But then the planter is not having to fertilize as much.

“Every year it seems we are trying something different.”

Larson estimates that all his modifications to the Blu-Jet unit cost about $12,000.

“Many of the pieces we mounted on the strip-till rig were taken off of other implements,” he says.

Larson is looking at moving his spring fertilizer application away from the planter for one reason: simplicity. Concentrating on the planter alone can be difficult, and Larson wants to ensure that an operator has only one thing on his mind while planting.

“Running a planter is tough enough, and you need to make sure everything is being done right,” he says. “I want this unit to stand alone and apply fertilizer ahead of the planter.”

It also gets some of the weight off his planter. Meanwhile, a GPS unit ensures that the planter accurately places the seed directly into the strips.

“I think that will help with seed placement,” Larson says. “Liquid fertilizer adds a tremendous amount of weight and that can impact seed depth.”

The modifications to the strip till unit include two ground-driven wheels that power two pumps.

Fertilizer runs from tanks mounted on the tractor and through the system. Each mole knife is metered with Redball units.

“It’s looking more and more like a spaceship,” Larson says. “But each piece serves a specific purpose, and it seems to work very well.

“It’s a heavy unit, and we’ve had little breakage other than standard wear to points, disc coulters and mole knives.

“If you think about it, it’s simply a bunch of small systems that all work together for a specific purpose. One system delivers the liquid fertilizer, still another delivers the N-Serve and still another is used for anhydrous. It works real well.”

Larson is running his strip-till anhydrous and 10-34-0 at a 7-inch depth in the fall, and he is placing seed 1.75 to 2 inches deep directly above the fertilizer band.

“That’s allowing the roots to get to the nutrients early,” he says.

Larson says it’s difficult to estimate the number of acres he covers in a day, since the unit is used during harvest and planting.

“In the fall, we’re running the unit at the same time we are harvesting corn,” he says. “So we’re not always sitting in the tractor at one time.

“When we get a break from harvest, we roll with the strip-till unit. But if we keep our nose to the grindstone, we can cover 300 acres on a good day.” 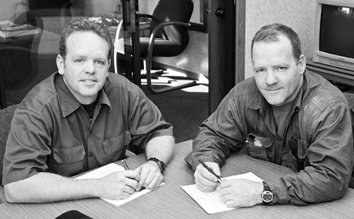 “We run the strips right between the standing corn stalks,” Larson says. “The pinto beans love the tilled strips, and seem to burst out.

“We run over the ground with a Summers Supercoulter to chop up and size the residue, add the strips and plant. After the planter, a roller-packer flattens the ground and trash, making it easier to harvest the pinto beans with a flex head.”

Larson admits that he’s still tweaking his system, but is encouraged that the versatility he’s adding to his operation will serve him well.

“In a dry year, we think we will have a leg up on conventional tillage by maintaining moisture in the soil,” he says. “But we also have a unit we can use during wet periods to help get our soil ready for planting.”

Larson also is seeing an improvement in his soil’s health, and he will continue to study that this summer.

“We’re not tearing up the soil all the time,” he says. “We’re considering coming in with a backhoe this summer to dig some pits and see what’s going on in the soil profile.”

And he’s also ensuring his fertilizer dollar is going where it’s needed.

“We are placing fertilizer right where the plant needs it, in the root zone,” Larson says. “The mole knives are breaking ground, the seed is placed precisely, and the roots don’t have to go far to find nutrients.”