Four years ago Kevin Elmy wasn’t happy with the rate of return he was getting on his canola crop.

Inputs had gone through the roof to around $350 an acre when he factored in seed, fertilizer, chemicals and overhead.

At $10-per-bushel canola he needed 35 bushels an acre just to break even. He realized there were other crops he could grow without having to spend $350 an acre — and one of them was cover crops.

Elmy, owner of Friendly Acres Seed Farm near Saltcoats, Saskatchewan, had been experimenting with cover crop mixes for a few years before he decided to fully implement them as part of his long term rotation.

He started by replacing canola with a cover crop, at around $25 an acre for seed, that he harvested as green feed, and then seeded winter triticale into better-quality soil and a better seedbed with less inputs. 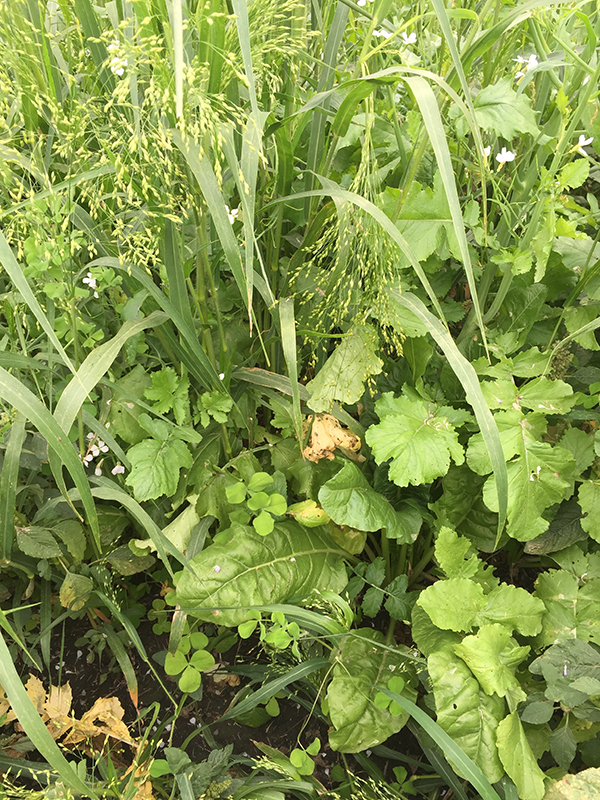 No-tiller Kevin Elmy has experimented with different cover-crop mixes that include radish, Japanese millet, proso millet, sugarbeet, chicory, crimson clover and sunflower, using them to replace some canola acreage. The Saltcoats, Saskatchewan grower hasn’t bought nitrogen (N) fertilizer for 6 years, and his total fertilizer bill has gone from $60-$70 an acre down to $10 per acre, on average.

The mixes Elmy has experimented with have included radish, Japanese millet, proso millet, sugarbeet, chicory, crimson clover and sunflower. Elmy uses cover crops to achieve a number of goals, besides just saving input costs — which he has definitely done.

He hasn’t bought nitrogen (N) fertilizer for 6 years, and his total fertilizer bill has gone from $60-$70 an acre down to $10 per acre, on average. At the same time, he’s improved the health of his soils and created a dynamic, holistic system that is self-supporting.

“I’m building up organic forms of plant nutrients that are staying in the soil longer, and I don’t have to worry about it gassing off or leaching out because it’s in a plant-available form,” Elmy says.

Elmy grows cover crops for green feed and grazing for his neighbour’s cattle, and also as a weed suppressant and nutrient builder for subsequent cereal and pulse crops, including soybeans,  winter triticale, corn, alfalfa and sainfoin.

He’s also improved the water-holding capacity of his land by increasing soil organic matter (SOM), which is vitally important to a farmer living in dry southern Saskatchewan.

“We’ve had wetter-than-average conditions over the past 5 years, but we’re undoubtedly going to get back to drought at some point,” Elmy says. “Every percentage of soil organic matter in the top 6 inches of soil holds an extra 27,000 gallons of water per acre.

“As I build quality soil organic matter, everything returns to a homeostasis state and is more resilient to stress.”

At a recent cover-crop workshop in Brandon, Manitoba, last spring, Elmy explained he manages annual cover crops and perennials to help him maintain the health of his soils, but that requires a well-planned, long-term rotation over his 1,500 acres.

“This is a long-term process, not a quick-fix pill,” says Elmy, who went on to give an example. “If someone seeded a blend of annuals and perennials — timothy, orchardgrass, tall fescue, birdsfoot trefoil, red clover, sweet clover and winter triticale — in the fall, it acts as a snow trap that keeps the ground temperature warm so the triticale overwinters.

“Next year they can take a cut of green feed and come back to graze it later in the season. Within 3 years, the perennials are established and will take over the stand. You can graze and hay it for a couple of years and then terminate it and grow a cash crop to capture all the free nutrients that have built up, and then go back to a cover crop again. It’s a 5- or 6-year rotation in total.”

He uses a Bourgault 8800 air seeder from 1986, with packers attached, and either a 1¾-inch hoe opener or 2-inch spike, depending on what his goals are and how much residue he’s seeding into.

He says 2015 was another unusually wet year in Saskatchewan, so Elmy experimented with aerial seeding some radish into a standing winter triticale crop in early August, partly as a demonstration for growers attending a field tour at the farm, and partly to see how it would work out.

An airplane with a drop-tube seeder calibrated to corn was used to seed radish at 5 pounds an acre with a 75-foot spread and seeded a lot of acres in a short period of time at a cost of only $9 an acre, he says.

When Elmy harvested the cereal crop in late August, the radish had established well and was doing its job of improving the soil by scavenging nutrients and building soil quality. Once frost killed off the aboveground green vegetation, it rotted back into the ground to feed soil microbes.

Elmy says radish is also one of Elmy’s best weapons against weeds.

“When the radish leaves grow larger they droop and touch the soil surface, and as they rot they give off an organic acid which kills anything trying to grow underneath it,” he says. “I can get 100% ground cover if I seed at the right rate.

“When I go in and direct seed next year’s crop, the seeding shank or knife moves the soil and leaves away so the cereal seed comes up with no problems And the weeds in between, under those rotting leaves, will all be dead by the end of the fall.”

Cover crops have also helped Elmy control volunteer canola, which was a persistent problem in his Roundup Ready soybeans.

“The easiest way to get rid of Roundup Ready volunteer canola is to grow a cover crop, and when it’s almost at full flower cut it for green feed, which decreases the weed seed bank,” Elmy says. 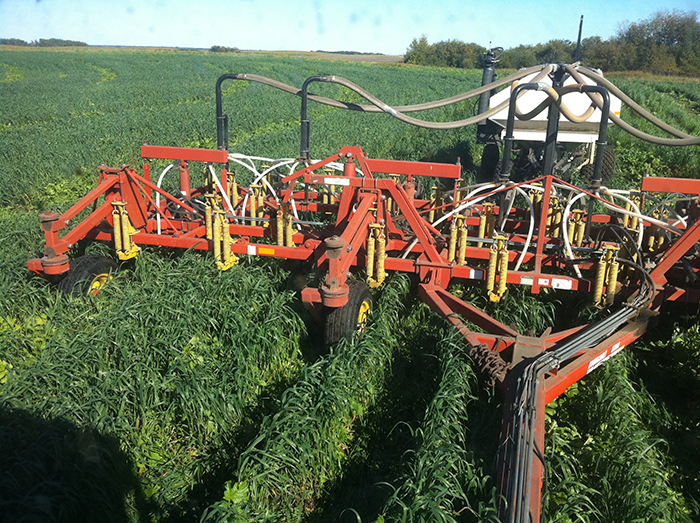 To seed covers, Kevin Elmy uses a Bourgault 8800 air seeder from 1986, with packers attached and either a 1¾-inch hoe opener or 2-inch spike, depending on what his goals are and how much residue he’s seeding into. He’s also doing some aerial seeding.

An ideal cover-crop mix contains the three main plant groups – grasses, broadleafs and legumes — and has at least one warm- and one cool-season variety of each throughout the rotation, Elmy says.

As a base, growers should have an idea of what plant species from each of these groups grow best in their area.

Determining the right blend of cover crops depends on what the goal is. Different plants can do different things, so the starting point is deciding what the grower wants to achieve and what crops are going to follow in the rotation.

Cover crops provide a lot of options. They can provide animal feed, and soil cover to feed microbes and earthworms – both essential soil builders. They can address physical issues such as soil compaction or erosion, or chemical issues like salinity or low N, phosphorus (P) or potassium (K). They can replace summer or chemical fallow, provide a cover for winter cereals or smother weeds.

Once a grower decides what his goals are, then it’s a question of understanding the above- and belowground biology, and how each plant plays a role to help reach those goals in each situation, Elmy says.

Grasses build soil organic matter and produce lots of biomass and are good for green feed or grazing, and to provide soil armour against erosion and weather extremes.

Bacteria recycle nutrients fast and feed on the carbon and proteins provided by green material.  Fungi feed on straw and humus in the soil that breaks down more slowly.

Fungi have fine filaments — hyphae — that reach places plant roots can’t and access micronutrients in the soil. They are the preferred food source for other soil life such as earthworms, which are another important indicator of soil health.

As a rule of thumb soil is healthy if there are at least five earthworms present in a shovelful of soil taken from the top 6 inches during warm, moist conditions.

Earthworms recycle nutrients that provide food for bacteria and fungi, which keep the system in balance. Tillage practices, growing brassicas such as canola in the rotation, and fungicides can all have an adverse effect on earthworm populations, some experts say.

Mycorrhizae are a type of fungi that is one of the most important microbes for healthy soils. Legumes and grasses are both dependent on the mycorrhizae, which will link the roots of these two types of plants and exchange N and phosphates between them. In exchange, the mycorrhizae receive sugars from both plants.

One of the quickest ways to build mycorrhizae in the soil is through zero-till and legumes such as alfalfa, Elmy says.

“Alfalfa plants will bring nutrients up from down deep, break up hardpan, build soil organic matter, fix N and increase mycorrhizae populations,” he says. “As part of my rotation I take a first cut of alfalfa as hay, then I do a second mow down, and then the third cut I let it stand.

“The rule of thumb is for every cut of alfalfa you take you remove 30 pounds of phosphate. So with my first cut I take 30 pounds out, and with the second cut I replace that 30 pounds I took off by leaving the residue on the land.

“The third cut is adding another 20 to 25 pounds because it’s not a full cut. After one year I’m up 20-25 lbs of P, and the second year I’m up 50 pounds and the third year 75 pounds. After 4 years the N fixation starts dropping off, and instead of fixing N it starts using N. But when I break up the alfalfa in year four my mycorrhizae is high, soil organic matter has increased, the soil isn’t burnt out and the microbes are still alive.”

Elmy believes a lot more growers could be exploring opportunities to reduce their costs and improve their existing land with cover crops.

“If you’re harvesting winter wheat the first part of August, you have 6 weeks to get something growing. In that 6 weeks you could be fixing 50-60 pounds of N, or bringing up phosphate, breaking up hardpan or addressing salinity issues,” Elmy says.

“If you’re growing wheat and canola and you harvest in September, maybe that’s when you look at some aerial seeding in July to add some diversity under that crop.”

He adds, “If you can get to the point where everything is pulling its own weight or more, you can take 5-10% of your acres out of production, put them into a cover crop to make them more productive, and then get those acres back into the rotation. Then you’re way ahead financially.”

What ‘Corporate No-Till’ Could Mean for Your Bottom Line