Scientists from the University of Nebraska-Lincoln (UNL) have begun a multi-year study into whether high-carbon char, a fine, powdery coal dust left over from sugarbeet processing, can improve crop fields.

Each year Western Sugar Cooperative produces 35,000 tons of char byproduct at its sugar manufacturing plant in Scottsbluff. Western Sugar has other sugarbeet facilities in Nebraska, Wyoming, Colorado, and Montana.

Researchers from UNL’s Panhandle Research and Extension Center and the Lincoln campus of UNL’s Institute of Agriculture and Natural Resources are beginning a three-year study in which they will apply high-carbon char to research plots near Scottsbluff. The char will be applied at several rates (0 to 25 tons per acre), incorporated into the soil, and then crops will be planted in a four-year rotation that includes sugarbeets, corn, and dry edible beans. 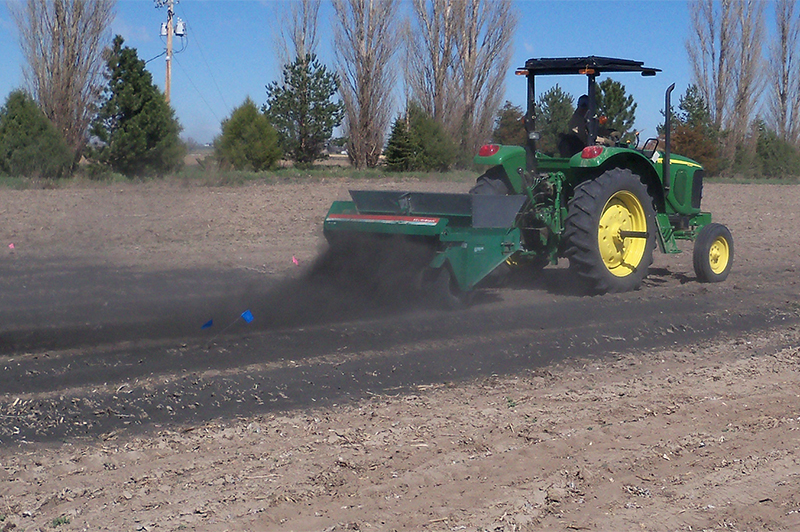 Figure 1. Char is spread onto research plots at the Mitchell Ag Lab, several miles north of the University of Nebraska Panhandle Research and Extension Center. The fine power is spread with a golf-course spreader.

The potential soil-quality benefits include an increase in organic matter and soil carbon. Higher concentrations of carbon in the soil reduce crusting, rapid soil-surface drying, and compaction and improve soil structure, water infiltration, water-holding capacity, and microbial activity. Decades of crop production have depleted organic matter and soil carbon from many fields in western Nebraska, according to Gary Hergert, retired soils specialist at the Panhandle Center. Hergert is advising the research.

This is one of a very few, and possibly the only, large field-plot-scale project in the United States to study the effects of biochar, Hergert said.

Research into biofuel alternatives to ethanol had been on the increase since growth in ethanol was capped in the new Renewable Fuel Standard by the Energy Independence and Security Act of 2007 (EISA). The new Renewable Fuel Standard capped production of corn ethanol, but called for increases in other types of biofuels that had a greater reduction in greenhouse gases. Hergert said this led to the expectation that other biofuel sources, such as cellulosic materials like irrigated grasses, would grow in importance.

One potential ethanol addition is second-generation biofuels created by pyrolysis, the heating of cellulosic substances to create an oil-like substance. Biochar is a leftover remain of pyrolysis. Research conducted elsewhere on its agronomic effects has been on small-scale, greenhouse-size plots, due to lack of federal funding and congressional follow-through that would support second-generation biofuels, according to Hergert.

To date there are no commercial-scale pyrolysis plants in the United Sates. Little, if any, of the research has been conducted on field plots. But there are large piles of char, which is very similar to the biochar, near the region’s beet sugar refineries. And there are field plots at the Panhandle Research and Extension Center. And now, thanks to funding from the Western Sugar Cooperative Research Committee, there is a multi-year project to see if char applications will benefit the soil.

Getting the char from Western Sugar’s piles onto research plots takes several steps. A contractor, Paul Reed, hauls away the char and screens it into various particle sizes. Reed uses the larger particles for road aggregate; the finer particles go to UNL for application in test plots at the Mitchell Agricultural Laboratory north of Scottsbluff. Finding an implement to apply char was a challenge, Hergert says. Manure and fertilizer spreaders did not work, but the sand spreader did, as long as the char is first screened to eliminate larger pebbles.

The char has current commercial use as a road material and the potential future use for improving soil properties and crop production could point to future demand for the byproduct, Hergert said.

Humberto Blanco, associate professor of soil management in the UNL Agronomy and Horticulture Department, is the principal investigator. Blanco, in Lincoln, has been collecting soil samples measuring the soil’s physical properties.

In addition to the irrigated plots at Mitchell, char is being applied on dryland research plots at the High Plains Ag Lab under Creech's supervision.

This project is in its first year and is scheduled to continue through 2018.

“If it takes off, the demand will be much greater than the supply.”

What Is Soil Health And How Can We Improve It?