Soil carbon (C) is an important indicator of soil health and an integral part of the physical, chemical, and biological properties of the soil. Loss of soil carbon can lead to soil degradation and loss of productivity.

The Terra Preta soils are deep, dark brown, rich in nutrients, and contain significantly large amounts of soil organic matter compared to the surrounding soils. In addition, these soils have higher water-holding capacity; all of which make the soil highly valuable and productive. The Terra Preta soils are an excellent case study illustrating the long-term success of using high-carbon materials as soil amendments.

What Is High-Carbon Char?

Another potential carbon-enriched soil amendment with properties similar to biochar is char, also known as high-carbon char. High-carbon char is a residue from incomplete burning of coal such as during sugarbeet processing at the Western Sugar Cooperative near Scottsbluff. 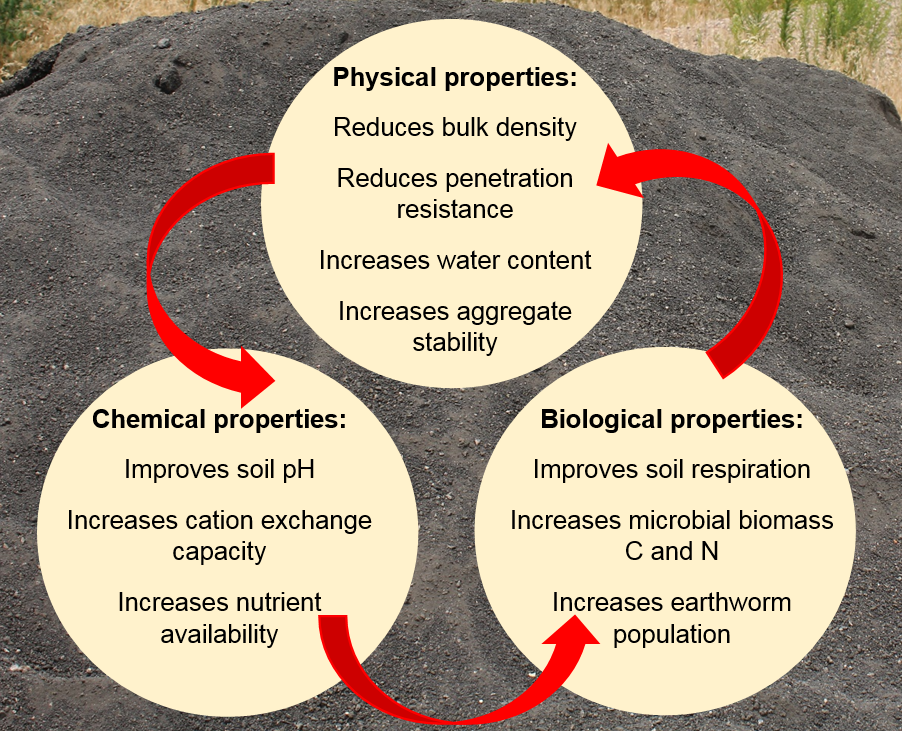 The plant produces 35,500 tons of high-carbon char per year from their sugar manufacturing process (Figure 2). High-carbon char from the Western Sugar Cooperative in Scottsbluff contains 30% carbon, 0.37% nitrogen, 0.22% phosphorus, 4.76% potassium, 4.76% calcium, 1.08% magnesium, and 0.51% sulfur in addition to many plant essential nutrients. Like other by-products recycled as soil amendments, including bio-solids and manure, potential contaminants need to be considered when using high-carbon char.

Researchers at the University of Nebraska–Lincoln are investigating the use of high-carbon char from Western Sugar Cooperative as a soil amendment to increase soil carbon, improve soil physicochemical properties and enhance crop productivity. Studies are being conducted on sandy loam soils near Sidney and Scottsbluff.

High-carbon char was applied in spring 2016 and roto-tilled into the top 6 inches of soil at both sites (Figure 3). Soil was sampled at the 0-4 inch depth in spring 2017. The impact of high-carbon char on crop yield and soil physical and chemical properties including soil compaction properties (soil bulk density, penetration resistance, and shear strength), soil water content, cation exchange capacity, total carbon, and macro- and micronutrients was studied.

However, the degraded site in Sidney showed a trend of reduced penetration resistance, indicating that roots could more easily penetrate through the soil where high-carbon char had been added. In addition, results from one of the fields near Scottsbluff (W2 field) showed a significant increase in soil water content. At the degraded site near Sidney, total carbon content increased by 90% with 9,000 lbs per acre and 149% with 18,000 lbs per acre of high-carbon char application compared with control (no high-carbon char) plots.