Using cover crops to improve soil quality in the semi-arid environment of western Nebraska, where water is the main yield-limiting factor, may not be economically justified.

Over the past 30 years many farmers have adopted no-till summer fallow and no residue removal as important water conservation practices under wheat-corn-fallow or wheat-fallow rotations.

However, evolution of herbicide-resistant weeds and absence of new herbicide Modes of Action (MOA) in the past 25 years have prevented many farmers in western Nebraska from controlling weeds during summer fallow and avoiding excessive soil water extraction. This soil moisture loss can severely impact the succeeding crop.

Replacing no-till summer fallow with a cool season legume crop such as grain-type field peas may:

The trade-offs are that field peas may deplete soil water and potentially reduce the yield of the succeeding wheat crop (yield penalty = 5-6 bu/ac-inch of water loss), especially in dry years.

The objective of this two-year rotational study was to compare impact of field peas vs no-till summer fallow on water use, soil fertility, beneficial insects and soil microorganisms, yield of succeeding wheat crop, and profitability. 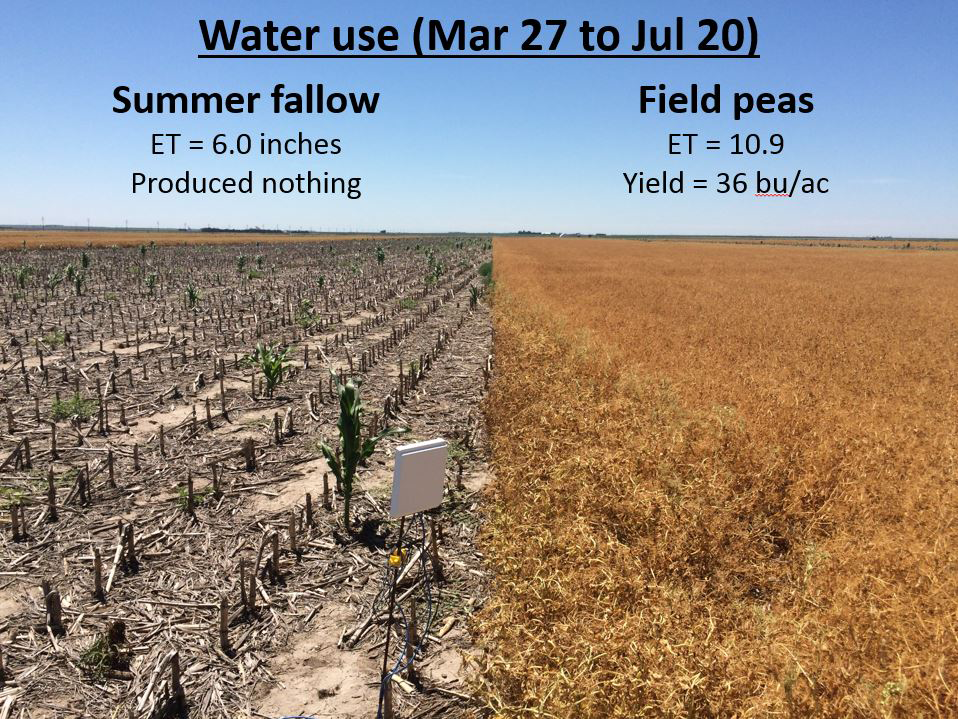 Figure 2. Water use (ET) in the summer fallow field was 6.0 inches compared to 10.9 inches in the field peas. For the difference in moisture the field peas yielded 36 bu/ac. 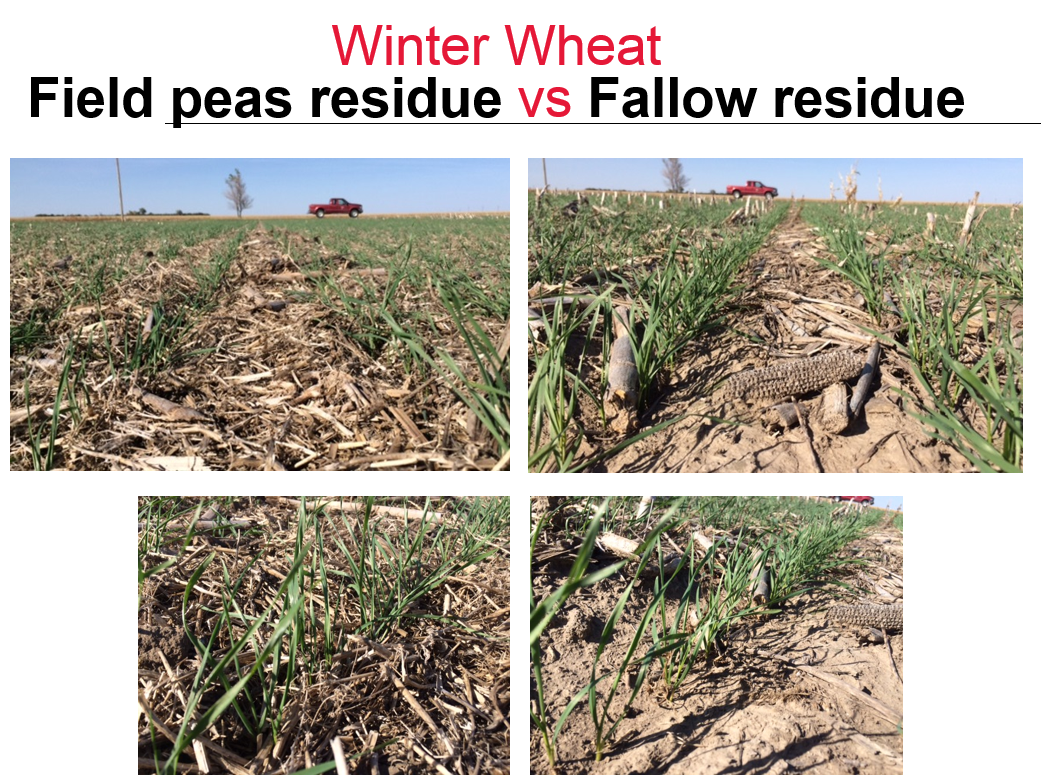 The study was initiated in spring 2015 on a cooperator's field in Chase County near Enders. The field site was historically operated under a no-till system in a wheat-corn-fallow crop rotation. The predominant soil type was Blackwood loam. The strip trial was a pairwise (side-by-side) comparison of field peas vs summer fallow with nine replications (total of 18 strips, each 60 ft x 2,650 ft).

The field pea cultivar Salamanca was inoculated (Cell Tech liquid inoculate) and drilled (10-inch drill) in strips at 180 lb/ac seeding rate on March 20, 2015. There was good establishment and nodulation (Figure 1), and the crop was harvested July 20, 2015. Winter wheat was planted across the whole field on Sep 14, 2015 and it will be harvested in strips in summer 2016 to evaluate rotational effects of treatments on wheat yield.

Soil water status was measured every 12 inches to a depth of 36 inches using Watermark® granular matrix sensors (Irrometer Co., Inc., Riverside, Calif.), which were installed in representative areas of the field pea and fallow plots. Crop water productivity was calculated for field peas by dividing grain yield by seasonal ET.

Soil fertility was evaluated by taking one soil sample for each treatment at different times and depths and having them tested for nitrate (NO3-N), phosphorous (P), potassium (K), organic matter (OM), and microbial activity (Solvita® test). Potential biological control Bacillus were targeted for isolation from the roots of mid-season pea samples. The isolates of the microbial biocontrol agents were identified through 16S rDNA.

Quantification and diversity of beneficial insects and potential pests were measured by collecting insects from pitfall traps capturing insects moving along the ground and sweep nets used twice during the growing season to capture insects on plant foliage during the growing period. Profitability was calculated for both treatments based on:

Treatment effects on wheat yield are yet to be evaluated. Soil fertility, water use, and profitability data will be shown in this report. 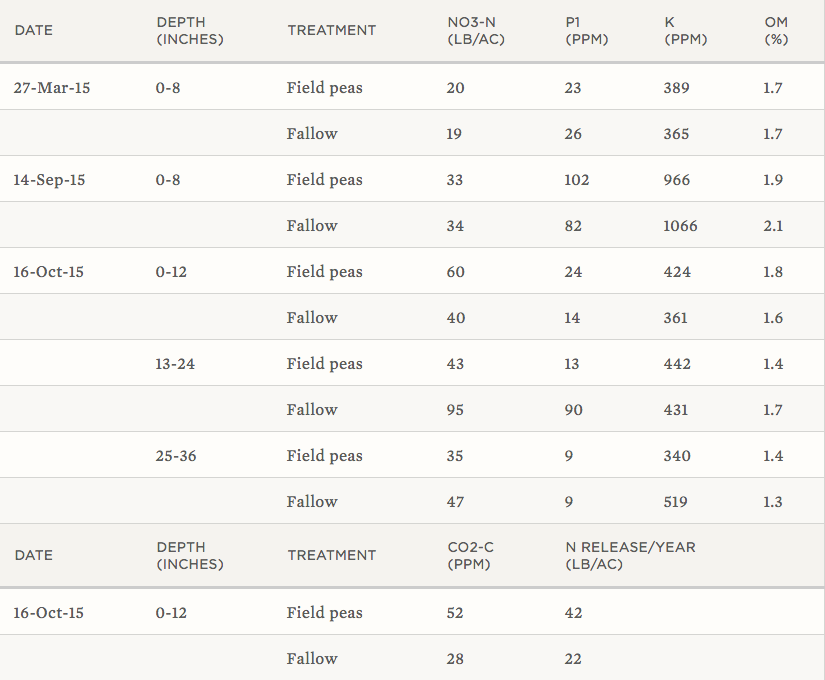 Soil samples showed that organic matter (OM) and concentrations of actual soil nutrients did not differ between field peas and summer fallow (Table 1). A Solvita® test taken one month after wheat planting indicated higher soil-microbial activity and annual N release in areas of the field where field peas were grown (Table 1).

Water Use and Water Utilization

Water use data indicated that field peas used 10.9 inches of water to produce 36 bu/ac yield, which resulted in crop water productivity of 3.3 bushels per acre-inch. Whereas, fallow used 6.0 inches of water without producing any grain. At time of harvest, the field peas had 6.9 inches of available water in the top 36 inches of soil, which was 2.9 inches less than fallow (Figure 2). However, 5.3 inches of soil water recharge occurred from July 20 to November 15 (Table 2), which resulted in good winter wheat crop establishment.  On the other hand, fallow remained near field capacity (i.e., full soil water profile) and did not have the ability to store the 5.3 inches of rainfall (Table 2). Differences in residue cover were also evident (Figure 3). 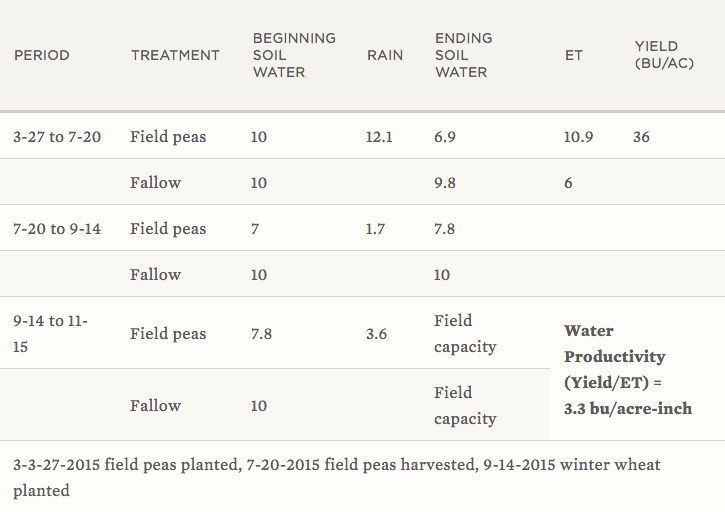 The pitfall trap data showed that field pea plots supported more insects living along the ground than the fallow plots; in particular, there were a greater number of beneficial predators (wolf spiders and rove beetles), parasitoid wasps, and decomposers (dung beetles and carrion beetles).

However, there were also a greater number of potential pests (click beetles and leafhoppers). These insects did not cause harm to the field peas, and we will investigate whether there are any effects on the winter wheat crop growing in 2016. The sweep net data showed that there were a greater number of beneficial predators (several types of spiders and hoverflies) in the field pea plots compared to the fallow plots.

When field peas are flowering, they are particularly able to provide resources for beneficial insects. If these insects stay in the field, this could have positive effects on pest control for the following winter wheat crop. In general, field peas supported a higher number of beneficial and potentially pest insects when compared to fallow, but the impact that this has on the following wheat crop is not yet known and will be studied this year.

Analysis in the laboratory showed that the root of field pea supported high bacterial growth. Two bacteria isolates from pea root samples were identified as Lysinibacillus sphaericus and Bacillus cereus and they are both microbial biological control agents.

Samples will be taken in spring 2016 to clarify whether these organisms persist and affect specific microbial populations in the following winter wheat roots compared to the winter wheat crops after fallow. This year, we will study how this may affect root colonization by specific microorganisms such as mycorrhiza, beneficial Bacillus but also soilborne plant pathogens. 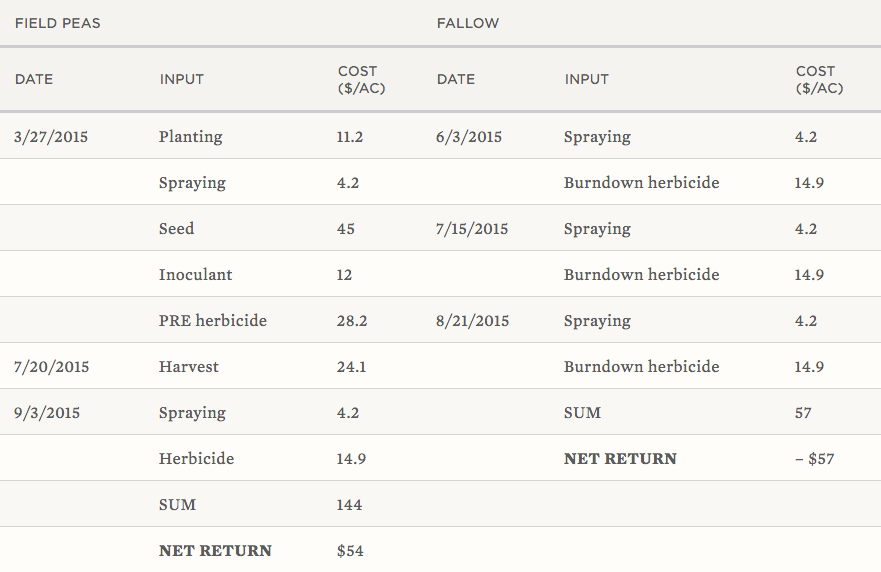 Table 3. Profitability per acre of field peas vs. fallow.

Profitability analysis showed that raising 36 bu/ac field peas and selling them at $5.50/bu market price generated profit of $54/ac, while cost of managing summer fallow was $57, making $111/ac difference in farmers’ net return (Table 3). Further economic analysis will be performed after wheat harvest and taking into account benefits that may come from higher microbial activity and N release rate that was observed in areas of the field where field peas were grown.

Field peas have potential to be used as alternative to no-till summer fallow in wheat-fallow and wheat-corn-fallow rotations to increase sustainability of crop production in western Nebraska. Although, effects on wheat yield are yet to be evaluated, this years’ preliminary results showed that field peas had

It is also important to mention that this year’s weather conditions (i.e. wet year) favored growth and production of field peas, and that research needs to be replicated in dry years to capture worst case scenarios. No-till summer fallow remains an important water conservation practice in western Nebraska.

Thank you to Chris Pursley and his family of Enders for their hard work and dedication to this on-farm research study which generated information to benefit our farming community.