Over the past 30 years, many dryland farmers throughout western Nebraska have replaced conventional tillage fallow with no-till chem-fallow to improve water conservation practices under wheat-corn-fallow or wheat-fallow rotations. However, sustainability of fallow is becoming a major challenge due to:

What are the alternatives?

Switching to continuous corn or replacing fallow with shorter season crops such as soybean, field peas, chickpeas, or proso millet eliminates the expenses associated with the fallow period. Unlike fallow, each year crops are harvested for grain with hopes of generating economic return. However, intensification of crop rotations often leads to less water being available to the subsequent crop in the rotation, often causing lower crop yield and reduced profit (Nelson et al., 2015).

The objective of this project was to compare fallow to field peas, chickpeas, and soybeans in terms of water balance, impact on next year’s wheat crop and profitability.

The demonstration plot was conducted at the Henry J. Stumpf International Wheat Research Center at Grant. The predominant soil type in the study was Kuma silt loam and the previous crop in rotation was corn. The demonstration plot included side-by-side comparison of field peas, chickpeas, soybeans, and fallow planted in 40-by-400 foot strips. Seeding dates for field peas, chickpeas and soybeans were March 14, March 24 and May 17, respectively. Harvest was conducted on July 16, August 17, and October 23 for field peas, chickpeas and soybeans, respectively. Other cultural and agronomic practices were completed following university-based recommendations. The winter wheat crop was planted on October 23 across all four strips following soybean harvest.

Soil water balance (DSW), the difference in soil water profile (inches per 5-foot depth) at the beginning and end of the growing season. Water losses in fallow due to runoff (0.6 inches), deep percolation (11.5 inches), and evaporation (8.0 inches) were much greater compared to fallow replacements, resulting in total of 20.1 inches of total water loss (Table 1). However, fallow was also the only rotation that increased soil profile (5 feet) water storage by 1.9 inches over the course of the season (Table 1).

Deep percolation (DP). Substantial DP losses were observed in all evaluated cropping systems due to above-average spring precipitation (6.5 inches higher than the 30-year average; Table 1). Among cropping systems, the largest DP was observed in fallow (11 inches) followed by chickpeas, soybeans and field peas which had 6.7, 6.0, and 5.0 inches of DP, respectively. Growing field peas led to better utilization of spring precipitation and consequently, reduced water losses due to DP.

Crop Water Use Efficiency (CWUE). Among the fallow replacements, field peas were the most water-use efficient crop, producing 30 bu/ac yield with 11.9 inches of water (2.5 bu/ac-inch). Next were chickpeas with a CWUE of 1.9 bu/ac-inch, followed by soybeans, which produced only 18 bu/ac using 18.6 inches of water (CWUE of 1.0 bu/ac-inch).

Figure 1 summarizes the differences in soil water extraction patterns. Although field peas, chickpeas, and soybeans had similar amounts of total available soil water at wheat planting, the soil water extraction patterns were quite different between fallow replacements (Figure 1). Field peas utilized water from soil depths below 3 feet during the grain-fill period in June and July, but allowed for greater precipitation storage in the top 3 feet during the three-month post-harvest fallow period. Conversely, chickpeas and soybeans used most of the available water in the top 3 feet of the soil profile finishing off the crop during the summer months, thereby not reaching for water at depths greater than 3 feet and not allowing enough time for precipitation storage in the top soil. Soil water storage in fallow was greater than any fallow replacements, except in the top 6 inches where water retention was reduced due to lack of residue cover. 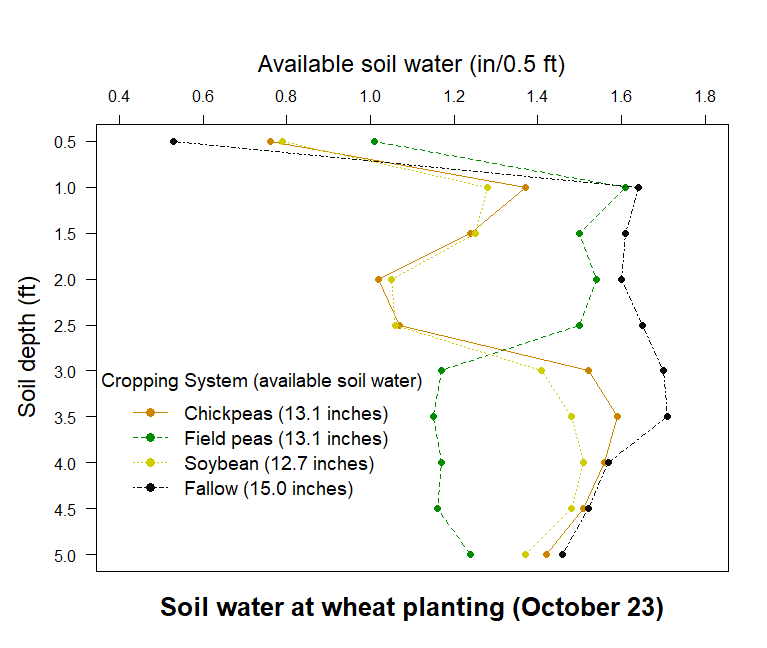 Previous research has suggested that for every inch of water removed from the soil water profile by a crop and not replenished before wheat planting, a yield penalty of 4-6 bu/ac may occur in the following wheat crop (Nielsen et al., 2016; Stone and Schlegel, 2006). Compared to fallow, field peas, chickpeas and soybeans had 1.9, 1.9, and 2.3 inches less water, respectively, in the soil profile at wheat planting (Figure 1). Therefore, if such water deficit is not narrowed or eliminated during the winter, yield penalties of 8-12 bu/ac can be expected in next year’s wheat crop.

Final evaluations on the system’s water balance and profitability will be completed after the winter wheat crop is harvested in July 2019.