This study, funded by the United Soybean Board (USB), was conducted to understand the potential for cover crops to perform in a corn and soybean rotation, and to collect data on the performance of cover crops in those rotations in relation to the timing of termination.

The research showed winter cereal rye that grew an extra three weeks prior to soybeans produced about 300-400% more biomass (Fig. 1) with a 100% increase in nitrogen retention (Fig. 2), when compared with early terminated cover crops. 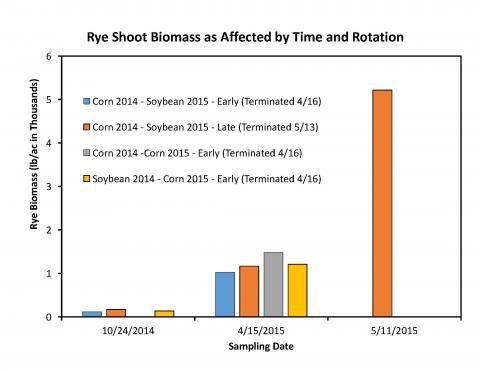 In the second termination timing treatment, the cover crop was terminated the day before soybean planting, resulting in about 21 days of extra growth.

1) Soybeans are planted on average three weeks after corn.

2) Cover crops can be terminated as little as one day before soybean planting without impacting soybean yield whereas, cover crops must killed at least 10 days before corn planting to avoid corn yield loss. 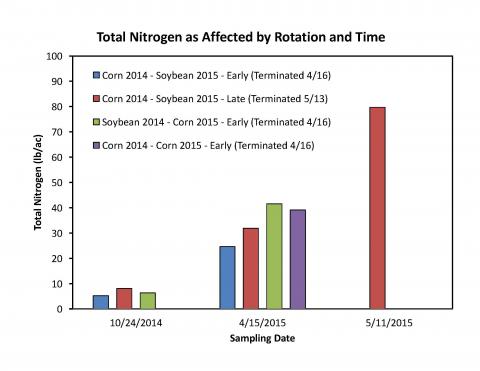 Conclusion
Short-term economic benefit: Despite letting the cover crop grow an extra three weeks, the data showed no negative effect on soybean yields. By increasing biomass production and retaining nitrogen, the system will build soil health and have a positive impact on water quality challenges.

Long-term economic benefit: In this study, leaving cover crops in the ground three weeks longer resulted in a 300-400% increase in biomass production.