Of all the soil-related problems for crop production in Kansas, one of the most potentially damaging for crops is high salinity. Fortunately, salinity problems affect a relatively small percentage of the total acres. The Arkansas River floodplain has the greatest concentration of salt-affected soils in Kansas.

In some cases, salinity problems occur because of a shallow water table and poor quality of the river water, as is the case with the Arkansas River floodplain. Other causes include soil formation from parent material high in soluble salts, poor quality irrigation water, excessive application rates of manure or other waste products, and spillage of brine water associated with oil production.

Some degree of salinity in the soil is normal, and even necessary because essential nutrients exist in the soil as part of the soluble salts. If soluble salt levels are too high, however, salt can reduce seed germination and plant growth.

The key factors used to diagnose whether a soil is saline, sodic, or saline-sodic are: electrical conductivity of the soil; soil pH; and percent sodium saturation of the cation exchange capacity. The following table summarizes the important differences between saline, sodic and saline-sodic soils.

Saline and saline-sodic soils often have a white crust on the soil surface. Sodic soils usually have a brownish-black crust from the dispersion of organic matter.

When salt levels in the soil become too high, the osmotic pressure within the soil is increased to the point that soil water is held too tightly for plant roots to be able to absorb it. Most plants become stressed or die from lack of water uptake in a saline soil. Plant species vary markedly in their tolerance to salinity levels. Some species are quite tolerant, such as salt marsh grasses. Unfortunately, the major agronomic crops grown in Kansas are only moderately tolerant to salinity. Soybeans are slightly more sensitive than sorghum, corn, and wheat to salinity.

Measurement of soluble salt concentrations is normally made on a saturation paste by mixing just enough distilled water with the soil to totally saturate it. The specific conductance is then measured on either the mixture directly or a vacuum extraction of the mixture.

A specific conductance of 4 millisiemens per centimeter (mS/cm) or greater is defined as saline or saline-sodic. Sometimes this is reported as decisiemens per m (dS/m) or millimhos per cm (mmhos/cm). All are numerically equivalent.

Reclamation of salt-affected soils is possible. The first step is to assess the situation through a salt-alkali soil test to verify that a salinity problem exists. Find out whether it is only a salinity problem, or if excess exchangeable sodium also is present. 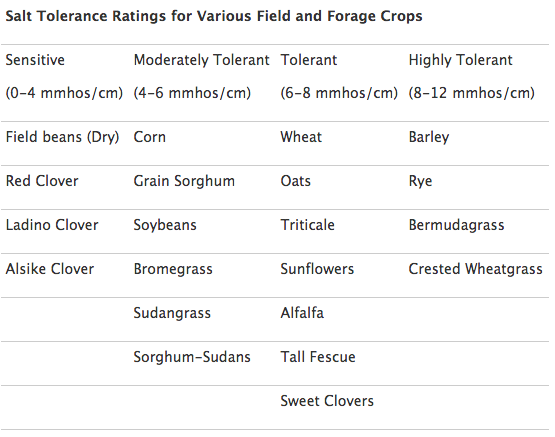 Crops differ in the ability to tolerate salt accumulation in soils, but if levels are high enough (more than 16 mmhos/cm) only tolerant plants will survive. As salts accumulate in soil, the soil solution osmotic pressure increases. When this happens, the amount of water available for plant uptake decreases and plants exhibit poor growth and wilting even though the soil isn’t dry.

Crop selection can be a good management tool for moderately saline soils. The table below serves as a general guide of salt tolerance ratings for crops, realizing that management practices, irrigation water quality, environment, and crop variety also affect tolerance.

Just as crops differ in tolerance to high salt concentrations, they also differ in their ability to withstand high sodium concentrations. Crop growth and development problems on sodic soils can be nutritional (sodium accumulation by plants), associated with poor soil physical conditions, or both.

Plants on sodic soils usually show a burning or drying of tissue at leaf edges, progressing inward between veins. General stunting is also common. If sodium levels are high enough, all crops can be affected.