This looks to be a record soybean planting year in North Dakota. One of the challenges in greater soybean acreage is the inherent and wet-period development of soil salinity on soils that already have high soil carbonate levels. Any soil salinity will produce lower yield than no salinity. Although there are a few soils in the state that have no appreciable salinity (Sioux sands and Arvilla loamy sand series for instance), most have some salinity.

Given the soybean price, it is reasonable that growers want to seed more soybeans. However, choosing the correct fields to place soybean for the greatest profit is important in our region. Just because a grower WANTS to harvest 40 bushels per acre of soybean or more, does not guarantee that this is remotely possible in some fields.

Successful soybean production begins with prudent soybean seed selection. The savvy grower might be able to utilize satellite imagery from a previous soybean iron deficiency chlorosis (IDC) year to map areas in the field that had IDC, and seed an IDC-tolerant variety in those areas and a higher yielding non-IDC tolerant variety in the areas not susceptible to IDC. This would be an ideal seeding decision and is based on work that Ted Helms, Jay Goos, myself and others conducted several years ago. It is important to choose an IDC-tolerant variety based on NDSU research, and not on a web-based or booklet-based company seed chart. See in-state ratings published in ND Soybean Variety Trial NDSU Publication A843-16.

The degree of risk of IDC is related first to soil carbonate level, which is the causal foundational factor that can result in IDC, then the soluble salt level (EC) that is a major contributor to the presence and severity of IDC in soybeans due to its stress on soybean plant physiology. Environmental factors that make IDC more severe are wet soil conditions and cooler temperatures. Any additional stress on growing soybean will make IDC more severe, including application of herbicide (any herbicide). In addition, high soil nitrates can increase the severity of IDC due to physiological process within the soybean tissue after iron uptake. Soil with nitrate-N levels greater than 80 pounds per acre 2-feet would benefit from a barley cover crop that will help dry out the soil and take up some of the N.

Foundating data from Franzen and Richardson, Journal of Plant Nutrition, 2000. 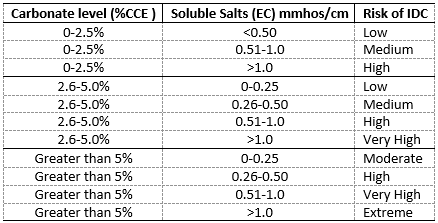 4 Things to Consider When Buying Seed for Fall Planting