A one-pass seeding system and protective residue cover has led to improved wheat yields and reduced soil erosion on the Galbraith farm near Basswood, Manitoba.

From left to right, Neil Galbraith, his wife Roberta and son Ryan have boosted yields through no-till despite a short growing season on their farm near Basswood in western Manitoba.

When Neil Galbraith first tried no-till 25 years ago, he had some challenges that he hoped it would help him overcome.

First was a lack of moisture that limited yields most years. Second was the cooler, shorter growing season on his farm near Basswood, close to the Riding Mountains in western Manitoba, which averages only 100 to 110 frost-free days a year and 1,300-1,400 growing-degree days.

After 2 consecutive years of severe drought in 1988 and 1989, Galbraith — who was farming part-time with his father-in-law at the time — followed the example of some early no-till pioneers in his area and stopped tilling.

“The main reason we went to no-till was because we wanted to trap more snow so we’d have more moisture at seeding time,” says Galbraith. “With more stubble and residue on the land after the crop germinates, we also had less evaporation from the soil and less transpiration loss of moisture from the plants, because it creates a cooler micro-climate down there.”

The first few years Galbraith knifed in nitrogen (N) in the fall or spring, and then direct seeded using a narrow opener in the spring and saw immediate, positive results.

“Our germination was earlier and better because we were always seeding shallow into moisture, so the germinating seeds didn’t have to go searching for moisture,” says Galbraith. “And the biggest thing we saw right away — and this is what helped us convert permanently to no-till — was we didn’t see any yield penalty with leaving the stubble standing.”

In fact, over the years, Galbraith has increased yields from an average 30 to 40 bushels an acre on wheat to 50 to 60 bushels per acre. Although he says improved genetics of the varieties, better fertilizer management and the use of fungicides has also contributed to the higher yields, he believes no-till has improved organic matter in the soil and pushed higher productivity.

“The organic matter, particularly in the top 2 inches of the soil, has increased from an average of 4% to 5% when I started to around 6% to 7% now,” says Galbraith. “I feel that’s giving us more N release because it’s been well documented by researchers that the higher the organic matter, the more N you get every year.”

What Galbraith is most happy about is that he has increased productivity in all areas of the farm.

“We have rolling topography, and from 100 years of cultivation before 1990, the soil was eroded from the hilly areas and moved down to the low areas,” Galbraith says. “What I’m finding now is that we’ve had a major increase in productivity on the hilltops and side slopes.

“There’s been more yield increase there than in the low areas, to a point where they’ve narrowed the gap. Before 1990, the high areas yielded half of the low areas. Now our high areas yield 75-80% of our low areas because we’ve stopped soil erosion and have built up the organic matter.” 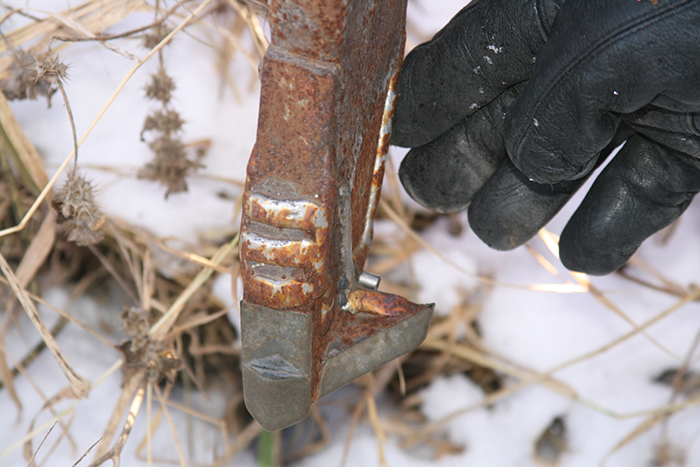 No-tiller Neil Galbraith points to the carbide wings on the Atom-Jet openers that he uses to sideband liquid nitrogen and sulfur as he seeds and applies dry phosphate in-furrow through the tip.

Another plus in his short growing season, was that after the first 5-or-so years of no-till Galbraith was often able to seed earlier.

“On our clay loam soil, about 3-5 years after we switched from tilling, we were getting a one-inch layer of mulch on top. That allows us to get out before people with black fields because our tractor tires aren’t on mud, we’re driving on straw,” he says. “The mulch also acts like a sponge, and the water soaks down faster into the soil when the snow melts.”

The only drawback with a mulch layer is making sure it’s out of the way to place the seed, says Galbraith. He uses a hoe opener to part the mulch, and packing wheels to ensure a shallow seeding depth.

“We aim for a seeding depth of half to one inch, but the opener is down 2 inches, so we have on-row packer wheels that pack the soil so the seed is ½ to 1 inch deep,” says Galbraith.

Galbraith admits that direct-seeding does require more management, including getting off the seeder to check the seeding depth across the seeder side to side, and front to back.

“On every field my son and I are on our hands and knees checking the depths, and you have to know your fields,” says Galbraith. “For example, we have some hills on the edge of a valley that have been badly eroded. So if I go into a field like that, I’ll make sure I check it on those hills because I know that’s going to be where my seed is going to be shallowest.”

Several years ago, Galbraith went to a one-pass air-seeding system, with a 225-bushel air cart and a tow-behind liquid fertilizer caddy, which has saved a lot of time and fuel.

Currently, he’s using a 40-foot Bourgault 8810 floating hitch air cultivator with 48 carbide-tipped, Atom-Jet openers on 10-inch spacings. The openers have carbide wings that band liquid N (28-0-0) and sulfur (15-0-0-20) 1½ inches to the side of the seed row. He applies granular starter phosphate (11-52-0) in the seed row though the opener tips.

Wheat straw management can be a problem, especially in higher-yielding wheat crops. Usually he uses a 70-foot Brandt heavy harrow in the fall to break up the tough straw, which works well.

But occasionally Galbraith has to resort to burning if the yields are exceptionally high, as they were in 2013.

“We were over 80 bushels an acre on some of our wheat — wheat yields that we never thought we could grow, and I had to put a match to it in the spring, but I hate having to do that because I don’t like burning up organic matter,” says Galbraith.

Another factor is that Galbraith straight cuts his wheat, so he’s also recently switched to John Deere 9860 and 9770 rotary combines from conventional ones because the rotor and better choppers help manage the straw in the less than perfect conditions he is often harvesting in.

“With straight cutting, we’re putting through a lot more tough straw,” says Galbraith. “With our short growing season we do very little combining in August, most of it is in September and October in tougher conditions and heavy dews, so that makes tougher straw. The rotary combines chop it better and don’t leave as many long straws to contend with.”

Galbraith grows mainly wheat and canola, but stopped growing malt barley a few years ago because the increased N release he’s getting under a zero-till system was pushing the protein levels too high to achieve malting grade — although it’s meant better quality wheat crops.

He’s trying to widen the rotation and tried soybeans and faba beans last year. The zero-till system worked well for the faba beans as long as he chose the smaller-seeded varieties that still required the highest rate he could go with his existing air tank.

But he had to till the soil for the soybeans to warm it up because he’s on the outer fringe of the growing area for them, and the yields weren’t as good as the faba beans. Whether he’ll keep them as part of the rotation will depend on the overall profitability of each crop. 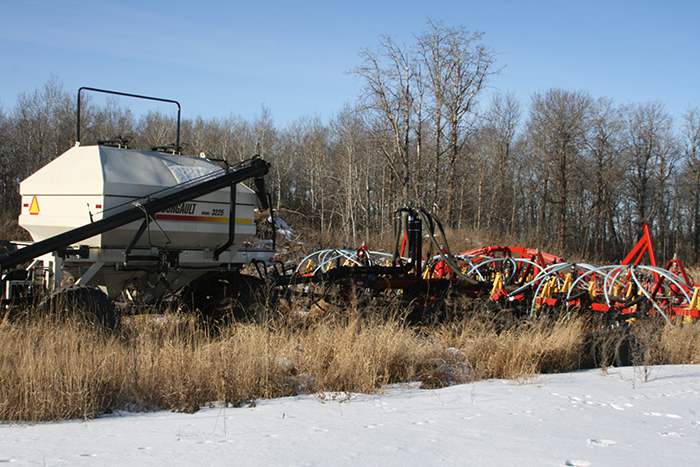 Galbraith says in the long run he’s saved money by going to a chemical burnoff for pre-seed weed control as opposed to cultivating in the fall or spring, which was tying up more manpower and time and increasing fuel costs.

But it did take patience and good management to get the winter annual weeds under control in the early days.

“When you switch from cultivating in the fall the weeds that are going to cause you a problem in those first few years are winter annuals like dandelion, stinkweed, shepherd’s purse, cleavers and chickweed,” says Galbraith, who prefers to do a burnoff after seeding and found pre-emergence has taken a lot of practice. “You need to know your soil temperature and how quick your crop will likely be out of the ground.

“If you don’t take care of those winter annuals one of three times — in the fall, before seeding, or after seeding, pre-emergence, they’ll come back to hurt you. The mindset of using herbicides instead of cultivator shovels is probably the biggest thing you have to learn when you transition to no-till.”

Because Galbraith uses glyphosate for weed burndown he generally grows In-Vigor canola to mix up the herbicide actions and try to prevent the development of resistant weeds. But he does have to be careful about his herbicide rotations.

“Cleavers, hemp nettle, wild buckwheat and lady’s thumb are our biggest broadleaf weeds, and so we can take care of those really well in-crop with a Group 2 herbicide in our cereal crop, but then we can’t use a Group 2 in our burndown before canola because it would kill it,” he says. “There are many things that come into it from a management point of view.”

Galbraith has manual, single-depth adjustment on the frame of the seeder that adjusts all the openers across the frame, but he’d like to move to a seeder with independent depth controls for each opener shank that will ride over his uneven ground and maintain an even seeding depth at each opener.

His 25-year old son, Ryan, who is now farming with Neil full-time, also has some ideas and they’re hoping to add variable-rate fertilization capability and yield mapping on the combines.

“I think the future of farming will be about big data, and that’s going to come from yield monitors and variable-rate prescription maps, which will make us more efficient,” Galbraith says. “Right now we’re putting the same N rate — about 100 pounds per acre — across the whole field.

“Well, I’m on rolling ground. I know it needs 40 pounds more here than there, so I think variable rate will pay for itself and complement our existing no-till system to improve our productivity and sustainability across the whole farm.”