Establishing a canola stand at the optimum planting date is the most critical step to achieving plant-to-plant uniformity and consequently, high yield. Timely planting, at an even planting depth, and in good soil moisture has the greatest potential to result in rapid establishment and greatest ability to achieve the desired amount of above- and below-ground biomass for overwintering. If planting is too late, the chances of having a non-uniform stand are increased.

Canola overwinters -- and is the most tolerant to cold temperatures -- in the rosette growth stage. At this stage, the crown develops at the soil surface with larger, older leaves at the base and smaller, newer leaves at the center. The stem thickens but its length remains unchanged.

For optimum winter survival, a winter canola plant needs 5 to 8 true leaves, 6 to 12 inches of fall growth, a root collar diameter of ¼ to ½ inch, and an extensive root system. Hardened winter canola can withstand temperatures below 0 degrees Fahrenheit for short periods of time.

On the other hand, canola that has too much top growth (typically 20 inches or more) can succumb to winterkill for a number of reasons, including overuse of available soil water and nutrients and stem elongation above the soil surface.

Stem elongation in the fall -- not to be confused with bolting, i.e. stem elongation with visible flowering structures -- may occur because:

For example, closely spaced and crowded canola plants increase early plant-to-plant competition for light. This “reaching” for light may lead to an extension of the growing point above the soil surface. Any time the growing point (rosette) is elevated, the chances for winterkill are increased because overwintering plant parts are located at an unprotected position above the soil surface.

Another factor in stem elongation and winter survival is the amount of surface residue present in the seed row. Kansas State research has shown that residue removal from the seed row is important for keeping the rosette, or crown, close to the soil surface, especially in no-till cropping systems. This residue management (related to quantity and evenness of distribution) greatly benefits winter survival.

Beware of the effects of residue blowing back into the seed row following planting into heavy corn residue. The canola hypocotyl is etiolated, or overextended, and thus vulnerable to freezing temperatures and other biotic stresses.

Etiolation results from the cotyledons growing through the residue to the point where light is intercepted. This is where the crown is established. As a result, the crop easily succumbed to cold temperatures and the field was lost because of poor residue management. 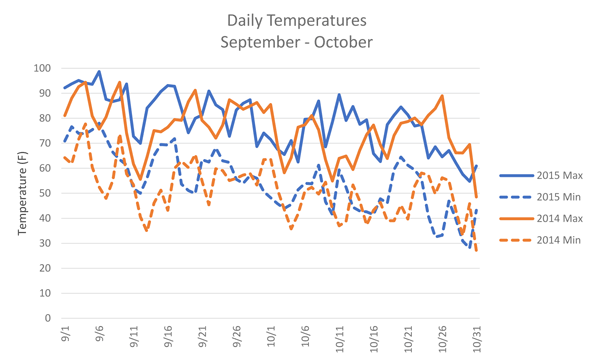 Soil moisture conditions dictated planting dates for winter canola in 2015. Through late August and early September, rainfall was sporadic throughout much of the area so some producers had to wait for rain in order to plant. Some producers planted later than they had planned. But with warm temperatures and adequate precipitation this fall, there is less concern that the crop will be too small going into the winter months (Figure 6).

Figure 7 shows that the high and low temperature trends for 2014 and 2015 are similar. Mid-September and mid-October were very warm in 2015. A slow decline in temperatures is occurring now. This is important as the canola crop should begin to winter harden this time of year. Low temperatures at or below 30 degrees F are essential for winter hardening. 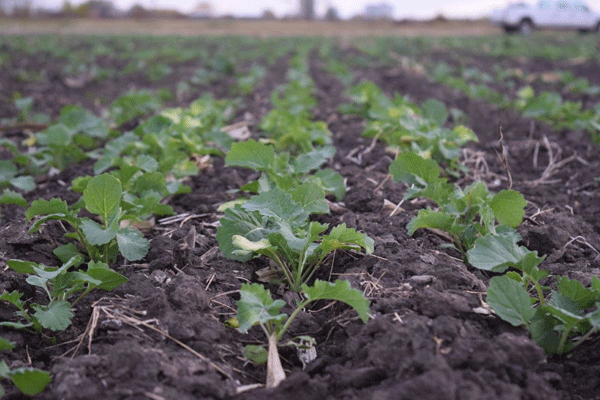 Figure 7. High and low temperatures from 2014 and 2015 at Manhattan. Mid-October temperatures were very warm in 2015.

Varietal differences exist for traits such as fall vigor, the ability to avoid fall stem elongation, and winter survival. More hybrids are being grown each year and the industry will one day switch from being dominated by open-pollinated (OP) varieties to hybrids.

Hybrids tend to have greater fall vigor because of larger seed size. Fall vigor is important because it results in rapid establishment and root growth. However, with hybrids and certain OP varieties, there can be a tradeoff between fall vigor and too much fall growth, and this usually has to be managed by agronomic practices such as planting date and seeding rate.

Planting hybrids later to take advantage of improved vigor may present some challenges in terms of winter survival if weather conditions are not favorable for fall growth.

The Kansas State canola breeding program has been selecting for lines that avoid fall stem elongation regardless of the planting date or seeding rate. These lines have prostrate fall growth and this often translates into better winter survival.

This trait could be especially useful in years when soil moisture conditions are ideal for planting but the calendar indicates it is too early to plant. In addition, we hope to broaden the optimum planting window by planting these lines earlier while avoiding the risk of too much fall growth.

Another tool under development by private industry and being evaluated by the Kansas State canola breeding program is the semi-dwarfing trait, or low-biomass-producing trait.

The semi-dwarfing trait also helps to keep the crown closer to the soil surface regardless of planting date or seeding rate. We have seen enhanced winter survival in hybrids that possess this trait. 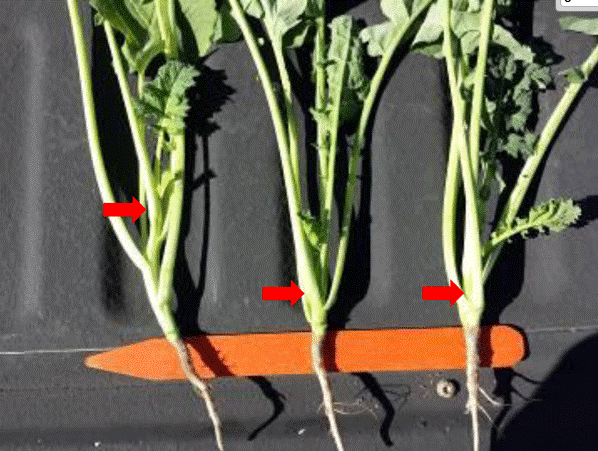 Figure 8 shows three entries from the National Winter Canola Variety Trial. The stake represents the soil surface while the red arrows point to the canola plant’s growing point. The hybrid on the left was developed in the European Union (EU) and is exhibiting about 2 to 3 inches of fall stem elongation.

The variety in the center is an experimental line from the Kansas State canola breeding program, showing no stem elongation. The hybrid on the right was developed in the EU and it possesses the semi-dwarfing trait. We would expect the hybrid on the left to be more susceptible to winterkill because of the elevated crown.

We have studies evaluating seeding rate by variety (OP vs. hybrid) in narrow and wide row spacing (9-in, 20-in, and 30-in). In collaboration with private industry, we are evaluating plant growth regulators and their ability to help manage fall growth.

Using plant growth regulators in winter canola is a common practice in the EU.

Other questions we want to address through these studies include: How far can we reduce seeding rates and remain profitable? Does reducing the seeding rate enhance winter survival? How do varieties respond to different seeding rates? What is the optimum seeding rate for a given row spacing by variety interaction?

Having too much or too little fall growth in winter canola depends on an interaction of the variety chosen, management practices (primarily related to planting date, seeding rate, and row spacing), and the weather.

Predicting the weather is challenging enough and this can be stressful on canola producers. Through breeding and production research at Kansas State, we hope to find improved ways to manage these risks.