The University of Tennessee Institute of Agriculture recently received several calls concerning nitrogen (N) applications on wheat. Although this cold front has made it easier to get across wet fields, it is still early for the first split in a late winter/early spring split-N application approach.

To make the most of the first split, target 'spring greenup,' or the period in which wheat breaks dormancy and begins to grow rapidly (typically Feekes 3 or Zadoks 25). Delaying applications until this point can help ensure the applied N is available to the developing crop by reducing the potential for N loss. The current N demand of the dormant crop is very low. As such, a N application made prior to ‘greenup’ will be susceptible to multiple N loss mechanisms with no agronomic benefit to the crop.

The graph shows a typical N uptake curve for winter wheat in Tennessee, where uptake is presented as a percentage of total. Keep in mind applications should be based on growth stage and not calendar date, as growth stage at a given date varies with season.

Ideally the N fertilizer would be applied just in time for the nutrient to move into the root zone and be utilized by the plant. From the curve, it is evident that large applications in early January are months away from peak demand and therefore will increase the potential for loss.

Two other things should be mentioned with respect to N applications following the 2014 season . . .

Most states which border Tennessee currently recommend little to no fall N (with exception of late planting, following rice, following corn which yielded better than expected, etc). The University of Tennessee’s recommendation is currently 15-30 pounds N depending upon the prior crop and planting date. This is due to the small N demand of wheat during establishment and through the winter months.

With that said, 2014 was an exceptionally wet year and many observed higher-than-expected yields. Given those conditions, I suspect many fields have less residual N than they would if following a more normal crop year. 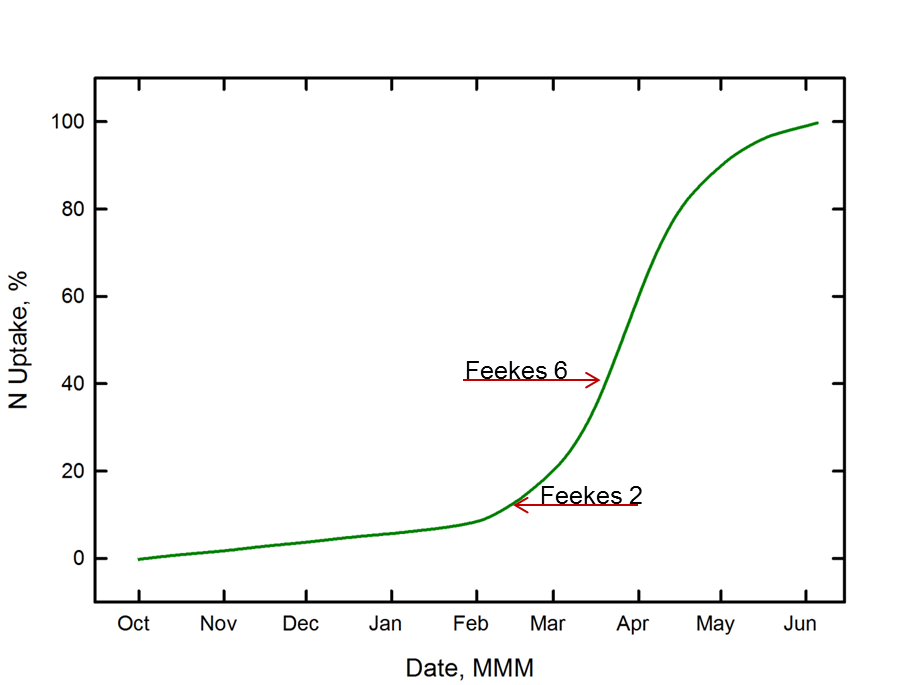 Even so, it would still be preferred (at this point in the season) to wait until ‘greenup’ is about to occur and then apply the first SPLIT of your target rate. Although a split application does force you to deal with another trip across the field during a typically wet part of the year and is taxing on equipment and man-hours, this split should:

For acres which received fall N or are following beans…

A split still has several potential benefits for these acres. Still, you may decide a single application of spring N is the preferred method. If applying all late winter/early spring N in a single shot, this application should be applied prior to jointing with a target near Feekes 4-5.