Thanks to direct seeding, Washington landowners spend more dollars, but end up with higher returns.

Having been 100 percent no-till for 7 years on 3,500 acres, Glenn and Bryan Dobbins are among only a few area farmers who don’t rely to some extent on summer fallow to conserve limited moisture.

The father and son team at Cheney, Wash., has utilized direct seeding for residue and moisture management for a dozen years. (No-till is known as direct seeding in the Pacific Northwest.) In a dry spring, direct seeding saves considerable soil moisture and results in higher yields compared to a highly intensive tillage, summer fallow system.

The Dobbins rotations include fall-seeded wheat and triticale along with spring-seeded wheat, mustard and barley. Ideally, the Dobbins seed half of their crops in the fall and half in the spring to spread the workload.

The Dobbins later direct seeded winter triticale. “We did this when barley and field pea prices were low,” says Bryan. “It boils down to whether you want to grow barley that will average 1 ton per acre or fall-seeded triticale at 2 to 2.5 tons per acre.

“Winter canola and triticale are new hopes for our direct seeded rotations because of the demand for high lysine levels in poultry and hog rations. Spring canola didn’t do well for us in dry years because early frosts held up planting and then the crop got hit with hot weather. Most winter canola in this area is seeded in late August into summer-fallowed ground. We tried lentils, but they didn’t grow tall enough on the steep slopes to allow for effective harvest.”

Their no-till equipment includes one drill, a sprayer and a heavy harrow. “The two of us can farm 3,500 acres alone because of direct seeding,” says Glenn. “We’re usually done seeding a few days ahead of neighbors who summer fallow.”

They direct seed with a 33-foot Concord air seeder that handles 40 rows with a 10-inch spacing where seed is scattered over a 3-inch wide area.

“With 10-inch rows, we keep the residue shorter than the row spacing,” says Bryan. “We work our way through heavy stubble when it is still attached to the ground, but this is often a problem when seeding in a wet fall.”

“We’re still learning about properly managing our residue,” says Bryan. “The key is to spread residue over the full width of your combine header and use a chaff spreader.

“Straw management is still our biggest problem. We run a Brandt heavy harrow to scatter chaff and break up standing stubble, but it’s critical to run the heavy harrow fast enough to break down the stubble.

“Residue management with each crop will be different every year. The amount of residue and how it is handled will make a significant difference in how much moisture the soil can absorb.” 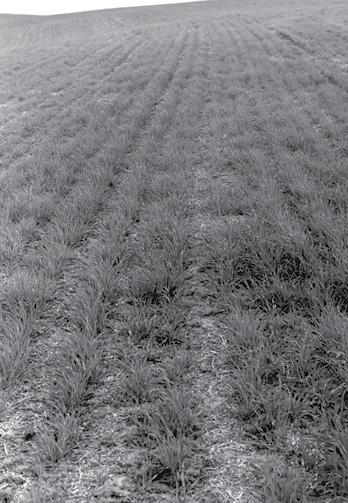 They find placing starter fertilizer with the seed is critical. They use Pro-Germinator, a 9-24-3 concentration from Agro-Culture Liquid Fertilizer rather than 32 percent nitrogen. By applying fewer gallons per acre, they cover an extra 40 acres per day due to the amount of time saved with hauling and transferring water and chemicals.

The Dobbins also deep band a high-performance nitrogen product called HighNRG-N. “This is a 27 percent concentrate of nitrogen with 1 percent sulfur that is more stable and offers a timed release of nutrients,” says Bryan. “It allows the application of smaller volumes of material, is less corrosive than most urea-based liquids and can be applied under a wide variety of conditions.”

Glenn says they avoid aqua forms of nitrogen or anhydrous ammonia. They find liquid nitrogen solutions are easier on earthworms, provide more microbial action in the soil, mellower soils and fewer disease and insect concerns. They’re also looking at research being done with a concentrated calcium product that would require applying only a few ounces in the fall rather than as much as a ton per acre. Another idea of interest is using glucose to boost the microbial activity in the soil.

Spraying 8,200 acres a year is done with an 80-foot-wide Brandt sprayer guided by a lightbar. “We normally spray all 3,500 acres twice with herbicides for broadleaf control and spray 1,200 acres a third time for additional weed control,” says Bryan. 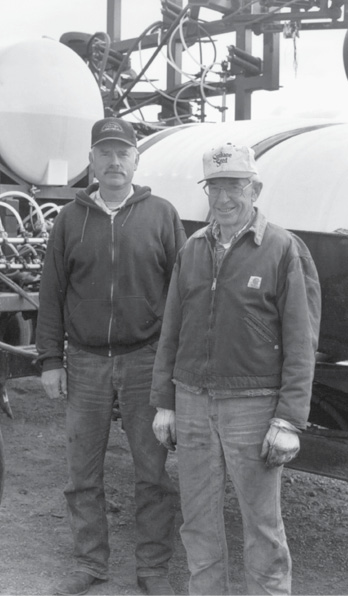 The Dobbins haven’t discovered any new weed problems since switching to continuous no-till, but recognize that cheatgrass has to be managed effectively.

“The key is to apply the correct herbicides at the right time and spray early before the weeds mature,” says Glenn. “Applying Roundup early in the season is cheaper than spot spraying twice with a wild oat herbicide later in the growing season.”

The Dobbins found landowners quickly accepted direct seeding and are happy with less soil loss and the higher returns from annual cropping. “We’ve convinced most landlords that our style of farming is good for the ground,” says Bryan. “While landowners end up spending more money than they did previously, they earn more dollars.

Bryan believes it normally takes at least 3 years to make the transition to direct seeding and to get yields back to the levels where they were before moving away from more intensive tillage. However, he believes the actual amount of time will depend on the amount of available moisture and many other variables.

Do More With Less!