No-Tiller Is Regional Farmer Of The Year

Jim Sidebottom of Greensburg, Ky., grew up on a dairy but had to work long at off-farm jobs before saving enough money to start his own dairy farm.

As a result of his success as a dairy farmer, Sidebottom has been selected as the Kentucky state winner of the Swisher Sweets/Sunbelt Expo Southeastern Farmer of the Year award.

Sidebottom now joins nine other state winners from the Southeast as finalists for the award. The overall winner will be announced on Tuesday, Oct. 16 at the Sunbelt Ag Expo farm show in Moultrie, Ga.

Sidebottom farms 518 acres, including 118 acres of rented land and 400 acres of owned land. He raises about 200 head of replacement heifers and milks about 210 cows three times daily.

His farm’s rolling herd average is up 30% since 1985 and now is about 22,000 pounds of milk per year. Paying attention to cow comfort, keeping facilities clean, using artificial insemination and feeding high quality forages is paying off.

His permanent hay fields consist of fescue, clover and orchardgrass, harvested once per year. He then uses the land as pasture for heifers and dry cows. He says he buys better quality alfalfa and at lower costs than if he grew it himself.

He protects the environment by using no-till planting, and he follows a comprehensive nutrient management plan in spreading dairy waste as fertilizer on his fields.

Sidebottom sells most of his milk for the fluid market through a milk-marketing agency. Most bull calves from the farm are sold to a local farmer for backgrounding. 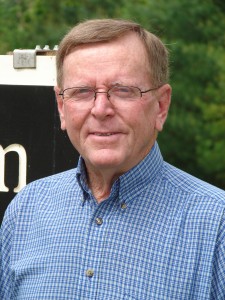 He took a roundabout journey to become a milk producer. After high school, he was drafted into the Army and stationed in Germany. “My wife Ona and I spent a one-year honeymoon in Europe,” he recalls. After completing military service, he owned a floor covering business and farmed part time.

“I ran the carpet business ten years before I saved enough to buy my farm,” he says. “I found myself enjoying the time I spent farming much more than the time I spent laying carpet. A buyer came along for my carpeting store, so I sold it.”

In 1981, he bought 203 acres, beef cows, some farm implements and started farming full time. A severe drought forced him to make changes. “Milking cows was not my original plan,” he says, “but after the drought, milking seemed to be the only way I could hang on to the farm. So in 1985, we traded our beef herd for 16 Holsteins.”

Early on, access to capital held him back, but he persevered and expanded. In the beginning, he pastured his cows and milked in a small six-cow parlor. Today, he runs a confinement dairy and milks 20 cows at a time in a modern parallel parlor.

Sidebottom built a new shed and equipped it with chutes used during hoof trimming and breeding. As cow numbers increased, he added grain bins and now has a 28,000-bushel storage capacity. He built hay barns to preserve forage quality. He built a commodity shed to store bulk feeds and minerals.

This expansion is ongoing. “Our family has worked hard to build our operation,” he says. “Our next expansion will call for a new freestall barn that will let us use our existing barns to house our heifers.”

He aims to double his herd size within five years. To do this, he’ll need to add to the land he farms. He’ll need this land to grow his feeds and to have a place for safe waste disposal. Then, as he increases herd size and overall milk production, he hopes to welcome members of the third generation of his family, if they want to live and work on the farm.

“I learned back in the Army that if you want to make a difference, you’ve got to get involved,” he says.

A panel of judges will visit the Sidebottom farm, along with the farms of the other nine state finalists, during the week of Aug. 5-10.

No-Till Farmer Product of the Year

The Best of No-Till Farmer is Yet to Come!

No-Till Is Worth The Effort (NNTC 2010 Presentation)- MP3 Download