An idea for a simple no-till ‘club’ grew into a private-public clearinghouse that influenced hearts & minds on the practice.

My dad, Frank, was recognized at the 40th anniversary event for supporting the upstart group through the pages of his No-Till Farmer.

“When the decision was made to form the CTIC, no-till acres had grown to 11.6 million acres, an increase of 8.3 million acres from 10 years earlier,” Lessiter says. He credits the early CTIC activities with “introducing him and his farm subscribers to some great no-tillers making it work.”

Lessiter was one of 11 officials (out of an invited 30) who immediately responded to the Oct. 9 invitations to attend an Oct. 27, 1981 meeting in Chicago. It was just 7 months after he bought No-Till Farmer and put out his own shingle in a troubled ag economy.

While a 40-year anniversary is significant for any organization, equally important is the template for how ingenuity, passion and persistence — and selling a vision to various camps and competitors — can change the face of farming. On its 40th anniversary, the CTIC can also be proud of its role in propelling no-till acres to 109 million acres in 2022. 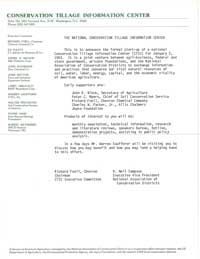 Click here for the News release announcing the formation of the CTIC, October 26, 1982.

The idea that became CTIC originally started with Dick Foell, herbicide product manager at Chevron Chemical Co. in 1981. He envisioned forming a no-till club (an idea that would have provided a lively forum for his No-Till Tigers, gaudy costumes and a venue for the “I Farm Ugly” song — click here  for Foell articles and podcasts.)

Foell found budget dollars and asked Bob Rice of PR firm Gibbs & Soell to investigate it. Foell admitted to No-Till Farmer in October 2022 that his concept “initially was motivated by commercial reasons.”

Chevron (eventually becoming part of the Syngenta group as it is known today) called a meeting at the October 1981 American Ag Editors’ Assn. annual meeting in Chicago to explore the idea, which exploded beyond Foell’s initial musings. In short order, other chemical companies, equipment manufacturers, government agencies and associations joined Chevron in the movement. 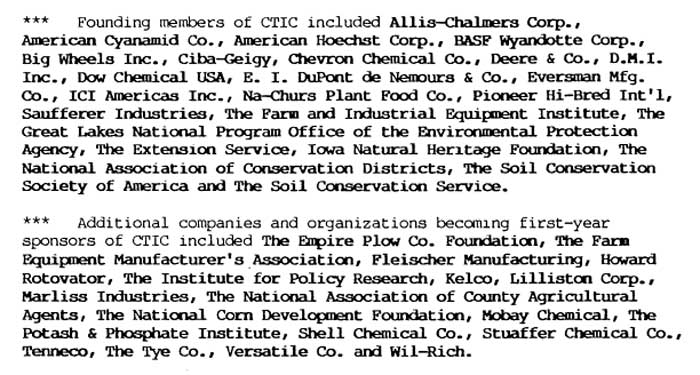 Shown are the early backers of the CTIC, from the 1983 Highlights Summary.

With wildfire-like interest, Jim Lake, program specialist of the National Assn. of Conservation Districts (NACD), outlined a proposal that would start a 15-month process that involved 3 proposals, two drafts, hundreds of phone calls and letters, 5 meetings and myriad speeches and news releases.

The first meeting generated more questions than answers, but a steering committee regrouped just 6 weeks later. While there were steady refinements from various quarters, the CTIC was formally established at a vote in Davenport, Iowa, less than 1 year after the initial meeting.

“Equally important in the CTIC story is a template for how ingenuity, passion and persistence — and selling a vision to various camps and competitors — can change the face of farming…”

It would serve “as a clearinghouse for information on conservation tillage,” with a mission of both gathering, and disseminating, knowledge. A $50,000 Joyce Foundation grant along with industry, government and NACD contributions would fund the new organization at the start of 1983, with a first-year budget of $250,000.

The appetite for CTIC’s information was huge. In a matter of months, more than 150,000 copies of the 8-page brochure, Have You Considered Conservation Tillage? were distributed across the U.S.

The CTIC funded no-till acreage studies long before the USDA did.

Working with the Soil Conservation Service, CTIC disseminated data from the ground-breaking CRM Survey. Technology was embraced right from the start, as data was offered by computer tape and even floppy disks for the early PC users. The Center Scoop newsletter, followed by Conservation Impact and Conservation Partners, spread the word.

In 1986, CTIC swapped the T in “Tillage” for “Technology” to reflect the emphasis on water and air quality as well as soil health. Other key initiatives ranged from Know Your Watershed initiative to a guidebook on water quality credits to innovative pilot projects on nutrient credits.

When the CRM Survey lost federal funding for field studies, the Operational Tillage Information System was deployed to track tillage and cover crop use via satellite imagery. The National Cover Crop Survey has been cited in congressional testimony to support conservation funding. And the Let’s Do the Math on Cover Crops project put cover crops into context through the practical experience of farmers.

The “Conservation in Action Tour” series — now in its 15th year — brought participants around the country to see diverse conservation systems up close.

The Conservation in Action Tours exposed a great number of individuals to farmers making no-till succeed in a variety of crops and conditions.

CTIC became THE vehicle to promote no-till, says Foell. “It became an industry crusade — of farmers, companies, universities and government to save soil, toil and oil — and the focal point for conservation for all Americans.”

No-Till Innovator Alum & No-Till Farmer Legend Dan Towery, who spent 10 years with CTIC from 1995-2005, credits the work of CTIC in the early days of no-till adoption and for bringing together all the stakeholders that were necessary to move the practice forward. “It helped introduce a new crop production method that broke all the traditional rules of how to grow corn, soybeans, cotton, wheat and other crops. 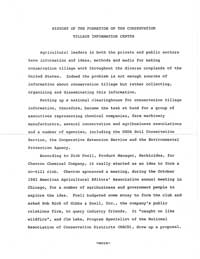 “Those early days were a tough road — with lots of push back that ‘you can’t farm this way.’ There were failures but also lots of successes. But CTIC helped legitimize no-till as an accepted practice for many crops in different areas of the country.”

Both Foell and Towery were inductees into CTIC’s first class of Hall of Fame recipients at the 40th anniversary event in September 2022. Karen Scanlon, longtime executive director, was also inducted into the inaugural Hall of Fame.

Chairs of CTIC's Board of Directors