It’s hard to believe another growing season has come and is almost gone. 2022 has had its share of challenges: a wet start, drought, corn root worm, soybean gall midge, pigweed, and (my favorite) tar spot. And now, as we approach harvest, we face final challenges like ear and crown rot.

There are some ugly ears out there, particularly in the localized areas that received hail during grain fill. In 2009, we documented increased ear rot and mycotoxin-contaminated grain in fields damaged by hail at growth stages R1-R3 at compared to fields with no hail damage (Robertson et al. 2010). Iowa State University extension field agronomist Meaghan Anderson scouted fields near Zearing and reported various ear rots.

It is important to scout fields for ear rots, and identify them correctly, because some ear rot fungi produce mycotoxins. Additionally, insurance companies may require the damage to be adjusted in the field prior to harvest. Grain with high levels of mycotoxins may be docked at the elevator, or worse still, rejected. A publication from the Crop Protection Network can help you identify what ear molds and associated mycotoxins may be present in your field: An Overview of Ear Rot.

For fields in which >10% of the ears are moldy, schedule an earlier harvest. Fungi that cause ear molds will continue to grow and produce mycotoxins in the field. Store grain from moldy fields in a separate bin. Dry (<15 % moisture), and cool (<55F) the grain as quickly as possible to stop fungal growth and further mycotoxin production. 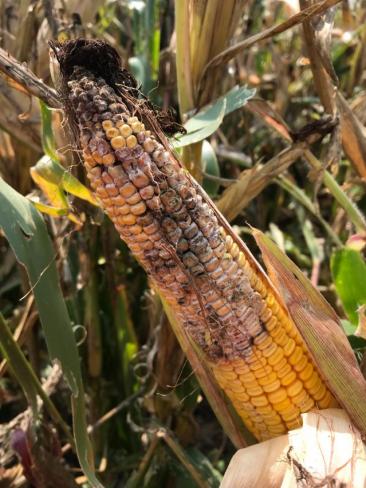 Ear molds associated with hail damage to a corn ear.

I am starting to hear reports of crown rot. Symptoms of crown rot include “ghosted” (premature death) plants (Fig. 2), and when the plant is split longitudinally, the crown tissues are dark brown-black and rotted (Fig. 3). Some hybrids are more susceptible to crown rot. Very wet conditions soon after planting followed by stressful conditions during grain fill are believed to favor crown rot. 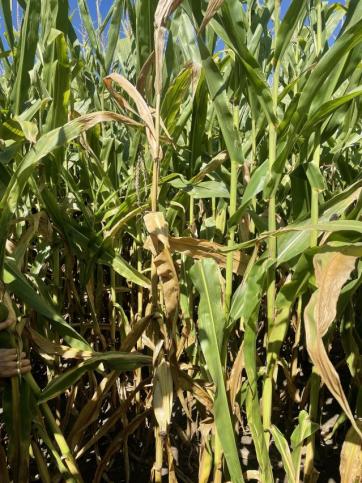 A “ghosted” plant is an indication crown rot may be present. 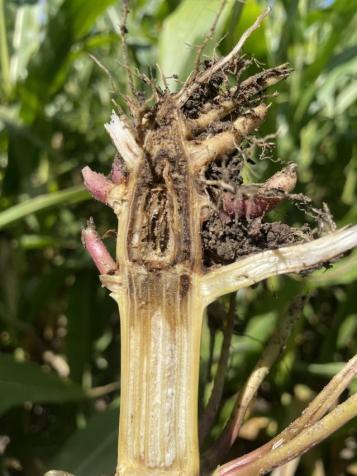 Fields that have >10% of ghosted plants, may need to be scheduled for harvest earlier since standability will be compromised.