Combining fertilizer placement at a depth of 4 to 6 inches during fall strip tillage may effectively reduce costs by merging two or three operations into one. The effectiveness of banding fertilizer in the fall for next year’s corn crop is still unproven.

Ontario research has looked at deep-banding significant amounts of potassium in a fall strip-till system for corn and found no advantage over the more traditional starter banding with the corn planter. It was anticipated that fall strip tillage/fertilizer would be regarded as a more efficient cropping system if benefits were demonstrated for both the berm (tillage effects) and the band (fertilizer effects).

This research project allowed us to continue our exploration and critique of fall strip tillage equipment and practices. Significantly greater confidence now exists in our ability to create uniform, elevated strips in the fall with the equipment available to Ontario growers with, in some cases, minor adjustments or additions.

The enhanced performance of the strip ?tillage equipment in the fall continues to be reflected in superior spring seedbed conditions. A greater number of sites in the 2002 season included a spring strip tillage option where no previous tillage had been done.

The two units we used (Yetter and Trans-till) were modified so the shanks ran shallower and with less soil disturbance than in the fall. In addition, disc-hillers were removed and in the case of the Yetter unit, were replaced with coulters.

In nearly all cases, seedbed preparation by the spring strip tillage operation exceeded the expectation of the project participants.

A significant motivating factor behind this project and the strip tillage concept in general is the delay in planting that is often associated with no-till systems, particularly on the medium to fine textured soils.

Our research on the field sites this year continued to demonstrate massive support for the idea that a properly formed berm or strip in the fall can significantly improve soil dry-down and hence planting timeliness.

Figure 1 outlines soil moistures taken in the pre-planting period and shows the significant gains over no-till in terms of having soil that is fit for planting. 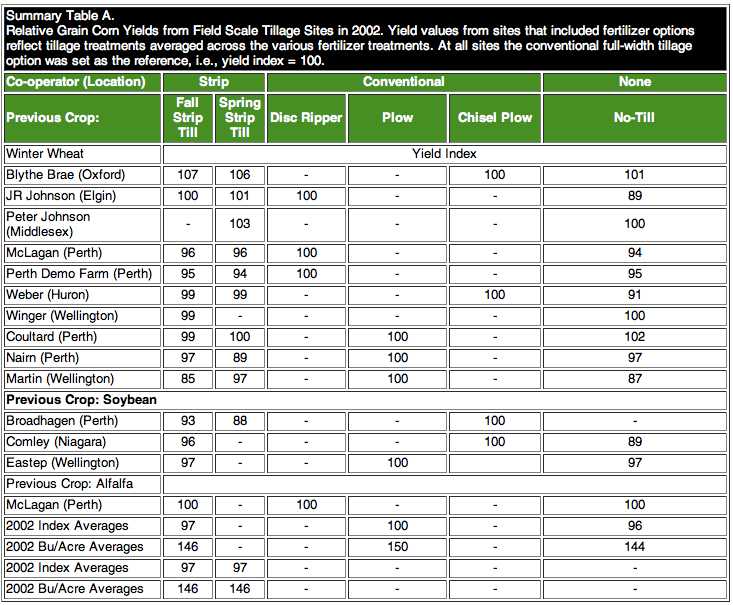 There were greater differences between tillage treatments at more sites in 2002 than in previous years.

First, strip tillage showed lower yield risk than no-till in 2002, but was not as stable in yield as full-width conventional-tillage.

Second, there appeared to be no difference in corn yield between spring strips and fall strips.

All of these plots were planted on the same day and this was generally when all plots including no-till were fit for planting. From a systems’ perspective, one could argue that these plots should be planted when each one is ready.

As in previous years, there was little response to fall phosphate and potash when banded during the fall strip-tillage operation.

Interestingly, phosphate and potash applied through the corn planter was by far the most effective technique for enhancing corn yield. ??This fertilizer response could not be reproduced within the strip tillage system even when higher rates of phosphate and potash were placed in a shallow band in the fall during the strip-tillage operation.

Growers interested in using the strip-tillage unit as a multi-task tool bar would be better advised at present to consider its possibilities as a UAN sidedresser instead of a dry fertilizer applicator during fall tillage operations.

Why Starter Is Critical With No-Tilled Corn